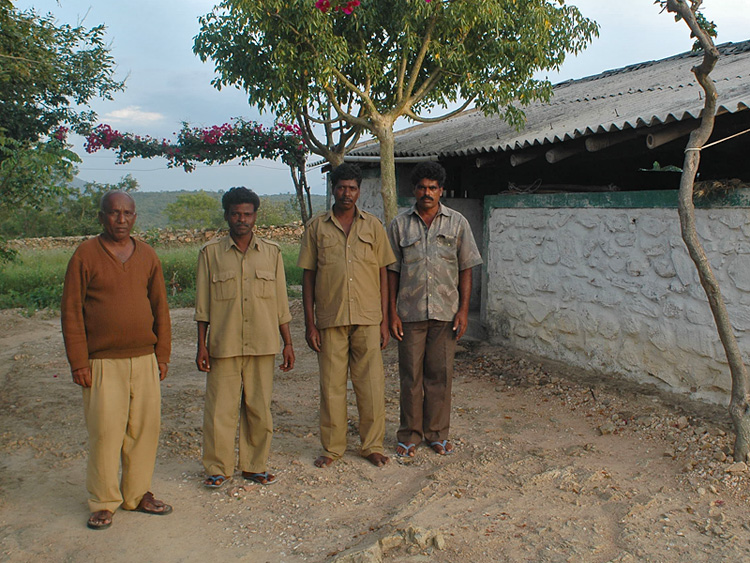 Originally published in The Hindu Survey of the Environment 2011.

Scorching sun, raging fires, inhospitable terrains and a few men trying to douse fires in these hostile conditions. Does this sound like a science fiction from a Hollywood blockbuster, unfortunately you are wrong. This is the scene in several of our protected areas during summers and few can bear with these situations and continue to fight for a cause. This clan has continued with this daunting task for decades in the pursuit to save one of the most important natural heritages of this country; wildlife. They are the forest watchers and guards toiling to save our charismatic and lesser known wildlife species.

These bare foot soldiers are the unsung heroes of the success of India’s wildlife conservation story. They have ensured that the curtains on our endangered species such as the tiger, elephant, one-horned rhinoceros, Asiatic lion, barasingha, hangul are not brought down. However few recognise their importance or contributions.

They are the first line of defense against wildlife poaching, forest fires, timber smugglers and other activities that degrade our wildlife habitats. This task is ridden with serious risks, many times life threatening. On numerous occasions they have been targets of Maoists and terrorists. There have been several instances of forest personnel abducted or killed, but they continue their duty amongst all these odds. To make matters worse they do not even have friendly neighbours. They face the wrath of local farmers, suffering conflicts from elephants, wild pigs, deer, tigers and leopards, directed at these helpless wildlife warriors.

As most forest offenders come from areas around protected areas the staff risk lives of their own and of their families carrying out their duty. At times families face social boycott in villages they live as the family head restricts fuelwood harvesting, livestock grazing or wildlife hunting.

The added risk of walking through elephant bearing forests is a daily risk. Attacks by elephants, sloth bears and other wildlife has taken considerable toll on these staff. Vishwanath, a forest guard, works in a remote location in Bandipur Tiger Reserve, Karnataka. He is 58 and suffers from diabetes and hypertension. His daily duty includes patrolling the forests looking for signs of illegal activities. However he finds it arduous to cover the vast area allotted to him. Ghastly is the fact that it is almost impossible for him to escape if elephants chase him, which is a possibility on most days. Old and ailing he is looking forward to the day of his retirement. Though he likes his job, his health condition and age are not suited for this profession anymore.

Many of these frontline staff are old and cannot take these harsh duties. A report published by the Tiger Task Force noted that a forest guard covers an average area of 15.35 sq km (~3,790 acres) in the country’s tiger reserves. In extreme situations they are covering upto 160 sq km (~41,000 acres) in places like Dampa Tiger Reserve. With average age of a guard in tiger reserves hovering around 50 years we cannot expect them to mind such vast regions. Additionally there are large scale vacancies that exist at this level with most national parks and wildlife sanctuaries ridden with nearly fifty per cent vacancies.

As the nation celebrates nine per cent economic growth these people relentlessly work in the remote corners of our jungles completely disconnected to the economic boom. Better roads are built for transportation, Government departments are computerised to increase efficiency, police are provided with modern equipment for improved enforcement but the forest staff continue to with minuscule facilities.

Drinking water has to be accessed from waterholes most of which are shared with wild animals contaminated by animal excreta and leaf litter. They walk far distances to get to these waterholes and if they run out of water at night they need to wait till daylight as it’s dangerous to venture out in the dark, especially in elephant country.

There are no lean periods in this job. Summers are perhaps the worst phase. Dousing forest fires in the blazing sun is no easy task. Terrains are inaccessible and getting few gulps of drinking water can also be challenging while carrying out this gruelling duty. After the long day of dousing fires the staff could be summoned at night to chase elephants out of crop fields. The job is more than demanding.

Working in these wildlife areas is a 365 day business. Weekend is an unknown terminology. They would feel blessed if they got a few days off in a month to visit their families. Often families fend for themselves with the family head remaining incommunicado for most times. With the spread of mobile phone technology communication has improved in a few places. But for those working near interstate boundaries mobile phones are more of a curse. Despite owning mobile phones they cannot use them as they mostly get connected to networks from the neighbouring states for which there are hefty incoming call charges. They cannot afford to keep their phones switched on as they will be obliged to receive all calls wrecking their pockets. The solution; switch on the phone only when they want to talk. For the families, the family head continues to be incommunicable.

Saga of the temporary staff

Those who are on the rolls on a temporary basis suffer the most. Always at the mercy of the local officer, their salary is neither fixed nor assured. A meagre remuneration, many times delayed by several months, is their only source of income. They are ineligible for any leave hence the days they are away visiting families or ill they lose their daily wages. In reality the temporary staff put more efforts as they are always kept on tenterhooks of losing their jobs or daily earnings. But they continue in the hope that there could be a day when their positions are regularised and made permanent.

These situations makes their families dependent on local moneylenders who often expect favours in return, including timber, fuelwood or other forest products. In such circumstances how do we expect them not to be lured by the attraction of bribes for letting timber smugglers or an occasional wildlife poacher?

Many do not even own two decent pairs of uniforms which could act as an important deterrent against poachers and smugglers. Worn out sandals, torn uniforms, a machete in their hands represent a typical forest watcher. No one respects a law enforcement officer with no uniform. Not even the smugglers. That’s the difference between a uniformed police constable and a forest watcher.

What could be done?

Desperation is setting in; they have pleaded enough with higher officials, political leaders, civil societies and anyone who talks to them of wildlife conservation. Some take interest in their plight and support them with basic equipment, assist their children’s education, facilitate insurance or provide motivational rewards. These interventions are laudable. However a few well known parks get the attention and support while the lesser known ones suffer. In the long-term interest we need a systemic change and these support systems needs to be built into the Governmental structure and supplied generously on a timely basis.

Their peers in the police receive hardship allowance while the forest personnel who carry out similar duties do not receive any additional benefits. Special allowance for working in protected areas can help offset the additional cost of maintaining families at distant places. The State of Karnataka has implemented a policy to give one lakh rupees to any temporary watcher who has put in years of service at the time of retirement in any of its tiger reserves. The funding for this is to be paid out of the respective tiger foundation. This novel approach can be followed in other states as well.

A transfer policy similar to peace postings in the defence forces should be implemented. This should assure that staffs who serve in protected areas for a specific time period would be given postings to one of the locations of their choice. This would ensure that they find working in protected areas not as a permanent liability as few come to replace them. The current feeling is once posted they are ‘stuck’ in the remote jungles forever unless they have political backing to pull themselves out.

These watchers, guards and foresters are critical for wildlife and forest protection. There is no alternative to the old system of foot patrolling as most illegal activities such as poaching or timber smuggling can only be detected through this mode of perambulation. Silent wildlife killers such as snaring set for killing ungulates for venison can never be detected by patrolling on vehicles. Snaring has even taken a severe toll on large cats like tigers and leopards.

These trench warriors lack capacity (barring a few) that is suited for their occupation. There is a dire need to organise periodic refresher courses. Such training courses should be on improving natural history skills, handling of fire arms, public relations, managing human-wildlife conflict and other similar subjects. While filling vacancies priority should be given to local and forest dwelling communities who have knowledge of the area and possess basic natural history skills. Educational qualifications and physical standard requirements can be relaxed for these communities.

Tiger Reserves are now mandated to setup Tiger Foundations through which tourism revenue earned in the park is spent for park management. Sufficient portions of these funds should be utilised for staff welfare and training. Government should allocate sufficient budget for these lower staff while drawing annual budgetary plans.

This intense neglect of the custodians of wildlife needs serious thinking. There is huge compassion towards the plight of these staff. But few have taken those extra steps to get changes in the system that could be long lasting and benefit the staff permanently.

Late P.D.Majhi from Pakke Tiger Reserve, Baalu in Bandipur Tiger Reserve, C.R.Naik in Dandeli-Anshi Tiger Reserve, Rajveer Singh in Ranthambhore are few examples of these brave men who are dedicated to this thankless job. These men have been largely responsible for the country to earn the title Land of the Tiger. We need to ensure their well being, if our charismatic and lesser known wildlife species are conserved for posterity.

Tahr on the Road!