A Beginner’s Guide to Bat-watching

Anybody who’s looked at the sky at dusk would know that, like birds, bats are ubiquitous. The challenge is not in knowing that they’re there but in finding out who they are and where they came from!

Anybody who’s looked at the sky at dusk would know that, like birds, bats are ubiquitous. The challenge is not in knowing that they’re there but in finding out who they are and where they came from. The ability to share space with us and yet remain unknown sets bats apart from other animals. And it is precisely this faculty that adds the sense of exploration that makes bat-watching compelling. If you have been intrigued by the mystery of bats read on to find out how to explore and learn more about these fascinating creatures.

Read on for an article and a photofeature of common bats of India and how and where to find them!

The sella, a horn-like projection of the nose, of an Intermediate Horseshoe Bat as seen in a side view helps in identification.

Great Himalayan Leaf-nosed Bat showing supplementary leaflets at the sides of its nose.

The mushroom-shaped tragus at the base of the ear of a Noctule bat belong to the family of Vesper bats.

Before setting foot on the birding soil, the birder equips himself with a pair of binoculars and a field guide. The same rule applies to bat-watching, or to any form of wildlife-watching—get your equipment right before you begin. Here’s what you’re going to need for bat-watching: Here is my Bat-watching equipment

Well-equipped? Here’s how to begin

You watch all other animals at a time when they are most active, but to get familiar with bats the best time to watch them is when they are inactive, that is, when they are roosting. The following are some places where you can begin your search for bats.

If all the above tips and tricks fail, don’t get demoralized. There’s always the Flying Fox which you can find even with your eyes closed!

Seen bats? Here’s how you identify them

Bats are unbelievably diverse. Close to 30% of the world’s mammals are bats. India has 128 species of bats—the highest among all the groups of mammals in the country. The two key points, thus, to remember while identifying bats are- a) There aren’t just two species of bats in India: a large Fruit Bat and a small Pipistrelle and b) It’s blasphemous to call every small bat a Pipistrelle!

Here’s an illustration of facial features of the eight families found in India. Illustration of facial characters of bat families by Rohan Chakravarty.

Bats are best identified by scaling down from family to genus and finally, species. Families can be identified simply by comparing photographs of your bats with pictures from field guides. Cameras are hence, very useful for beginning bat-watchers. Majority of the bat families in India contain just one genus so to identify families is equivalent to identifying genera. The major exception here is the family Vespertilionidae (simply, Vesper bats). This is the largest family of bats in the world and comprises the Pipistrelles, Mouse-eared bats, Yellow house bats and several others.

Once you’ve got the genus correct, the species can potentially be identified from photographs. The trick is to get a meaningful photograph and that photograph differs from family to family.

Bats are most active by dusk just how birds are most sprightly at dawn. Watching Flying Foxes leave their roost or seeing countless bats fly out of a cave at sundown makes for a spectacular sight. Most bats are thirsty when they emerge from their roosts, so waiting by a pond at dusk can help you see a lot of bats descend and skim the water. Once the thirst is quenched the next aim is to satisfy hunger. Now shift to a fruiting tree. Short-nosed Fruit Bats are partial to Singapore cherries (Muntingia calabura) and one can spend an entire night watching them hover around the tree to pick the choicest ripe fruits. Figs attract Flying Foxes and you can observe them feeding and squabbling among themselves. Insectivorous bats are best observed at streetlights and lamp posts in parks. To further enrich your bat-watching I strongly recommend getting a basic bat detector. The ability to listen to ultrasound and identify bats by their calls opens up a completely new and unknown world!

The best way to get familiar with bats is to watch them at their roost. However, it is also more intrusive than most other forms of wildlife-watching. It is extremely important that you minimize the level of disturbance as much as possible.

So that was all about getting you started. Beyond this is the realm of the advanced bat-watcher which involves setting mistnets, catching and handling bats.

Every form of wildlife-watching is a sport by itself. Birdwatching, butterfly-watching, dragonfly-watching and bat-watching are all as different from each other as cricket, football, tennis and volleyball! They require a specific set of skills and interests to start, and over the course of time, the hobby itself imparts a bunch of other capabilities. Bat-watching is about adventure, endurance, natural history and respecting the existence and unravelling the mysteries of a disregarded sect of the natural world. The challenges may discourage you at the outset but after a few experiences you will not want to step back.

Please note: Some bats pictured here were handled for measurements as part of a research project carried out with official permits and were released unharmed.


Rohit Chakravarty is an alumnus of MSc. Wildlife Biology and Conservation at National Centre for Biological Sciences and is currently studying bats in Uttarakhand. 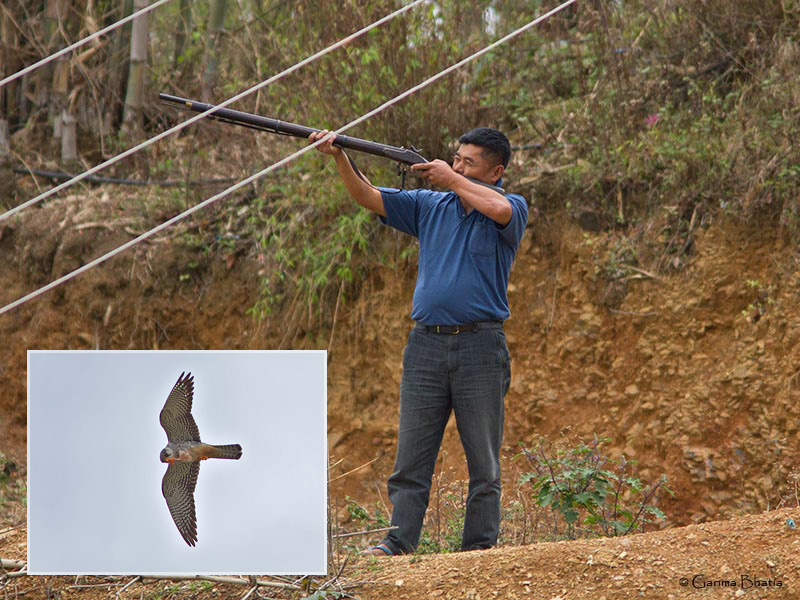