Ingestion of Plastic is Emerging as a Significant Threat to Asian Elephants in Haridwar and Lansdowne Forest Divisions, Uttarakhand

Gitanjali Katlam
In this study, 85% of the waste recovered from elephant dung samples represented plastic particles.

The ecological implications of plastic pollution on ecosystem processes and human beings are well known. Increasing use of single-use plastic, poor waste management, lack of recycling, and fragmentation of plastic have made it ubiquitous, posing a grave threat to species across trophic levels. Over 1500 species ranging from invertebrates to vertebrates are impacted by plastic pollution. Globally, plastic in marine environments has been reported extensively whereas terrestrial ecosystems have remained understudied. The effects of plastic pollution are alarming, resulting in the entanglement of animals in plastic, causing physical injuries. Ingestion leads to starvation and even death while leaching of plasticizers such as polystyrene, polyethylene, bisphenol A and phthalates cause toxicological effects on neurological systems and reproductive health by altering hormonal cycles. Such pervasiveness of plastic pollution on land and in the ocean may have long-lasting, distant, and large-scale cascading effects on ecological systems, defining it as a global change driver.

In our new study published in the Journal for Nature Conservation, we highlighted the presence of plastic in the dung of the Asian elephant (Elephas maximus indicus), emerging as a new threat to the survival of these endangered species. The study was conducted in Uttarakhand’s Haridwar and Lansdowne Forest Divisions. These divisions are immediate buffers of the Rajaji-Corbett National Parks and include significant elephant corridors. However, these regions have witnessed a rapidly expanding human population, increasing vehicular traffic, and habitat fragmentation over the last few decades. Asian elephants often visit human settlements around these corridors and feed upon food waste at the garbage dumps in and around the forest edges (Puri et al., 2020).

Systematic documentation of the presence of plastic particles in the dung of Asian elephants was one of our study’s most important findings. In their diet, we also reported other hazardous and toxic anthropogenic waste materials (metal, glass fragments, cloth fabric, glazed tile pieces). This reaffirms a higher probability of plastic ingestion in Asian elephants owing to their gulper-like foraging behaviour. Our surveys revealed that about 85% of the waste recovered from elephant dung samples represented many different-sized plastic particles ranging from 1 mm to even 355 mm in size. Further, we recovered a high proportion of single-use plastic items, such as disposable cutleries, food containers, polythene bags, and tetra packs categorized as macroplastic (>5mm) in their dung. This indicates their widespread use and poor waste management in the highly populated Kotdwar town close to protected forests, underlining the vulnerability of wild animals to plastic ingestion risk. Interestingly, we also observed a higher presence of plastic particles in samples retrieved from forests than from forest edges, indicating the dispersal of plastic through elephants into the forest.

Asian elephants are at higher risk of plastic ingestion as they cannot segregate food waste from plastic at dumps, unlike primates such as macaques (Katlam et al. 2018). These generalist species spend more time foraging with a wide range of food choices, making them even more vulnerable to plastic ingestion. This not only impacts elephants at the individual or species level but has consequences on lower trophic levels and forest ecosystems through dispersal and breakdown of plastics. Nevertheless, plastic ingestion adds to already existing threats to Asian elephants in this critical forest landscape.

In our previous study (Katlam et al. 2018), vertebrate species documented at the garbage dumps ranged from threatened mammals to birds and reptiles. Frequent visits to garbage dumps in search of food resources are likely to increase the chances of plastic and other hazardous waste ingestion (Katlam et al. 2018). In terrestrial ecosystems, garbage dumps are evolving as a novel ecosystem with a constant food supply to several vertebrate species. Regular consumption of readily available and highly enriched anthropogenic food at garbage dumps may change the food choices of species, compensating their dietary requirements through human-derived material and lowering the consumption of natural food sources. Such changes in feeding behaviour have been documented in many mammalian species exploiting garbage dumps.

In addition, dependence on garbage dumps may alter species movement and social structure such as a change in their natural behaviour, diel activities, and ecological processes such as interspecific competition, the transmission of zoonotic diseases, and potentially increase the chances of conflict for space or livestock depredation or competition for food with livestock. Overall, our study demonstrates the negative impacts of improper waste management on an endangered species around protected areas of conservation significance. However, in contrast, an abundance of organic food at dumps may positively affect the enrichment of body condition, betterment of reproductive health, increase in population abundance, and survival rate of species exploiting resources at landfills.

It is estimated that by 2050, plastic waste generation will triple globally (Geyer et. al. 2017), where 80% of the plastic comes from land (Eriksen et al., 2016). India has already imposed a ban on single-use plastic items. However, only a ban will not suffice to tackle this issue, especially in forest areas, as the prohibition is restricted around urban centres. Our recommendations include conducting a risk assessment of plastic on wildlife and mass awareness campaigns around wildlife habitats and protected areas. It’s imperative to develop local, regional and national policies targeting forest habitats to deal with the growing menace of plastic pollution. 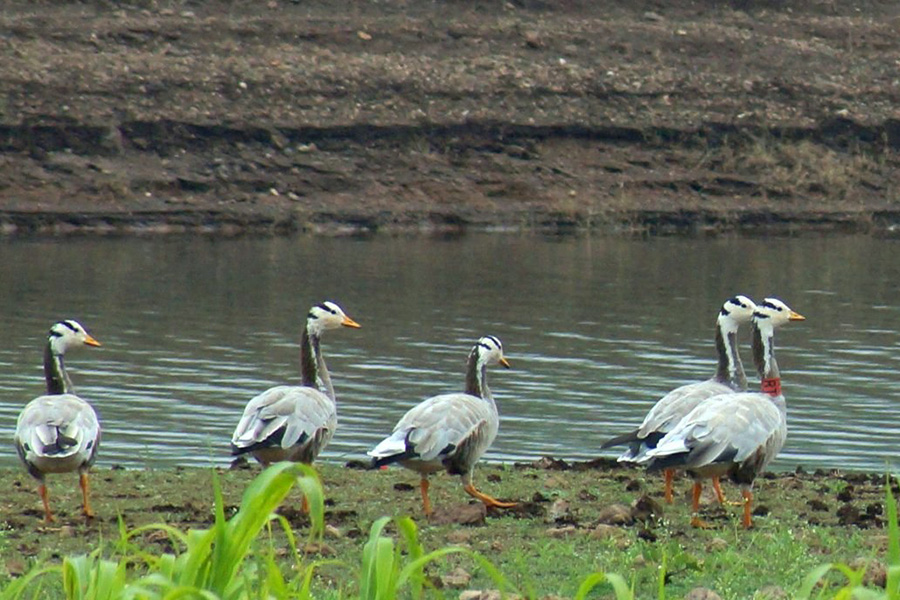