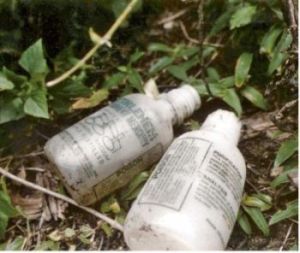 Corpwatch examines Unilever’s response when caught dumping toxic mercury waste from a thermometer factory in Southern India earlier this year. The Anglo-Dutch company recently closed the factory. Community members, however, allege that the multinational has downplayed the dangers of mercury and misled the public in an attempt to cover up the truth. Indian journalist Nityanand Jayaraman reports for CorpWatch.

In March 2001, residents of Kodaikanal, a pretty hill retreat in Southern India, caught the Anglo-Dutch multinational Unilever red-handed when they uncovered a dumpsite with toxic mercury-laced waste from a thermometer factory run by Unilever’s Indian subsidiary Hindustan Lever. The 7.4 ton stockpile (1) of crushed mercury-containing glass was found in torn sacks, spilling onto the ground in a busy scrap yard located near a school. Despite the visible evidence, Mr. Subramaniam, Hindustan Lever’s export marketing manager, dismissed charges of indiscriminate dumping. “No hazardous wastes have left the factory site,” he said.

The expose, which led to a march to the factory gates by more than 400 residents from the area, joined by Greenpeace India, marked the beginning of an ongoing saga of dishonesty and botched cover-up efforts by Unilever. “It’s been a learning experience that a reputed multinational could behave this way,” says Minoo Awari, an old-time Kodaikanal resident. “As a host community we feel cheated.” (2)

Mercury, the substance that Unilever is accused of handling without taking environmental or worker safety precautions, is a toxic metal that converts to deadlier forms such as methyl mercury when released into the environment. Mercury accumulates in the liver, kidneys, brain and blood and can cause birth defects and serious disorders of the nervous system and kidneys.

Responding to public pressure and the weight of the evidence, the company announced the closure of the factory on 21 June, 2001. But residents, workers and environmental groups like Greenpeace say that Unilever has a lot of answering to do. Health remediation and financial compensation for workers, environmental clean-up, and an apology to the community are key among their demands to Unilever. Unilever maintains that their operations have damaged neither the environment outside the factory, nor their workers’ health.

At Kodaikanal, Unilever’s behavior violates the environmental principles of the Global Compact that require signatories to “support a precautionary approach to environmental challenges” (Principle 7); “undertake initiatives to promote greater environmental responsibility” (Principle 8); and promote the “diffusion of environmentally friendly technologies” (Principle 9). Allegations that the company has employed a double standard in relation to worker safety indicate a violation of Principle 6: “the elimination of discrimination in respect of employment and occupation.”

The bulk of the mercury dumping occurred before the Global Compact came into existence. However, at least some of the dumping and all of the denials and cover up came after the company joined the Compact.
Cover-up efforts, including misleading statements, are clearly in violation of the spirit of the Compact. “What we hope and ask for is that companies that are participating in the Global Compact not only not lie, but also be open and transparent, and outreach to communities,” says Denise O’Brien from the UN’s Global Compact office.

In 1983, US-based Chesebrough Pond’s relocated its aging mercury thermometer factory from Watertown, New York, to Kodaikanal in South India. In 1987, the factory was acquired by Unilever when it bought Chesebrough Pond’s. The plant’s owner Hindustan Lever is Unilever’s 51 percent owned Indian subsidiary. The factory, which is said to be the largest thermometer plant in the world, is located on a ridge whose slopes form a highly biodiverse forest ecosystem (known as Sholas) endemic to this region. The Sholas also form part of a productive watershed that drains into the perennial Pambar river. Unilever imports all the mercury and glass for the thermometers from the United States, and exports all the finished thermometers to US-based Faichney Medical Co. From there, the thermometers find their way into markets in the US, UK, Canada, Australia, Germany and Spain.

Last year, Unilever sold between 7.4 tons and 15 tons of broken thermometers containing mercury to a local scrap yard dealer. (3) “I went to pick up scrap from the factory, and they [Unilever] said I would get the other scrap only if I took the broken thermometers,” says Ramesh Thiraviyam, the owner of the scrap yard. “Nobody told me it was illegal or that mercury is dangerous. Last year, my boys collected about half a liter of mercury but I don’t know what happened to it.” According to Thiraviyam, the toxic waste was sold to him at about $25 per ton (Rupees 1250 per ton).

On June 20, 2001, Unilever was made to clean up the toxic wastes at the scrap yard under supervision of the community and the authorities under a protocol designed to US standards. A company statement dated June 21 explained that: “Hindustan Lever Limited has retrieved, for secure storage at the site, the 5.3 tonnes of mercury containing glass scrap currently stored on a scrap dealers premises in Kodaikanal, which had been inadvertently removed from the factory in breach of established procedures.”

This is not the only toxic waste “inadvertently removed from the factory in breach of established procedures.” At least 30 tons of mercury contaminated glass wastes have been shipped illegally to various unsuspecting buyers in South India, including some who use the glass to make glass marbles for children. (4)

In January 2001, an investigation team, including the author, discovered yet another dump where Unilever had discarded mercury-containing waste. This dump was in the part of the Shola forests within the company’s property. Ecologically, these forests are part of the contiguous Shola ecosystem that extends down slope from the company’s premises. Sholas are hallowed forests because of their high biodiversity and role as watersheds. A barrel lying on its side had broken thermometers, some with visible quantities of mercury in them, spilling out onto the forest floor. In what appears to be an attempt to preempt negative publicity that could have resulted from the discovery of the waste, the company had its workers remove the waste dumped in the forests between January and March. The company admits that the waste was removed to a “better storage location” within the factory.

Immediately after the controversy became public in March 2001, Unilever also had its workers unearth more than 40 tons of waste from unlined pits within the factory compound. In an email response to the author, Unilever said that “we were taking out the non-mercury glass that had been buried at our own site in the 80s.” The company, however, did not clarify why they buried a recyclable commodity like glass, which the company admits to having sold in the past. Workers engaged in the unearthing operation say that contrary to Unilever’s claims that only “non-mercury glass wastes had been buried,” the waste unearthed had visible quantities of mercury. If this is true, the fact that none of the workers engaged in unearthing the wastes wore any protective clothing constitutes a serious violation of worker safety norms. Unilever claims that its environmental and worker safety standards are applied uniformly in all their facilities worldwide.

An environmental audit commissioned by the company in response to the controversy admits that the “estimated offsite discharge to the Pambar Shola forests is approximately 300 kg.” In other words, even Unilever’s hired consultant estimates that 300 kg of mercury have been released into the watershed forests south of the factory. Additionally, the consultants also say that 70 kg were released through airborne emissions. The consultant’s report does not indicate the destination of these emissions.

It is commonly known that as little as 1 gram of mercury deposited annually in a lake can, in the long term, contaminate a lake spread over 25 acres to the extent that fish from the lake are rendered unfit for human consumption. But a representative from the Netherlands-based TNO-MEP, a consultant hired by Unilever, ruled out the possibility of any effects saying that “300 kg is peanuts” given the other sources of mercury to the environment. (5)

Plant workers and Greenpeace maintain that the company’s figures of mercury discharges to the environment are grossly underestimated. “We’ve yet to receive the raw data based on which the company arrives at the audited figures. We’re not prepared to accept their figures unless we have a way to verify them,” says Navroz Mody, toxics campaigner with Greenpeace and a long-time resident of Kodaikanal. Unilever may have earned this skepticism because of the recorded inaccuracies in their public statements surrounding this issue and their lack of transparency in providing information to back their claims.

Current and former factory workers say that Unilever’s casual attitude towards the toxic mercury extended to worker safety at the shop floor. “When I worked there, they used to suck up the mercury from the floor using a vacuum cleaner once a day. In another section, where they heat thermometers in an oven, workers are exposed to gusts of mercury vapor every time the oven door is opened,” says Mahendra Babu, an ex-worker who has been active in organizing the workers against the company’s lax occupational safety practices.

A local doctor who spoke on condition of anonymity says “Most of those working there [at Unilever] get affected, mainly in the kidneys. I advise all of them that the only cure is to quit their jobs, and many do. Others suffer stomach pains, burning sensation while passing urine.” Mercury exposure is known to cause kidney disorders. According to the doctor, the symptoms reported — stomach pains and urinary problems — can indicate kidney problems. Responding to claims that mercury exposure in the workplace may have damaged workers’ health, the company conducted a medical check-up in March 2001. “No workers in the factory is (sic) suffering from any illness which could be attributed to mercury exposure,” according to the company. Based on the findings of that study, the company says that “no further tests are warranted since we believe that all necessary tests have been carried out as per the protocol.” (6)

However, a preliminary health survey conducted in July by two occupational and community health specialists from Bangalore-based Community Health Cell tells a different story. In their survey of 30 workers and ex-workers, the specialists found many people with “gum and skin allergy related problems which appeared to be due to exposure to mercury.” Another significant finding, the survey reports, is the high rate of absenteeism and resignations from the job owing to health problems. “The preliminary assessment… indicates that there is a need to assess all the exposed workers in greater detail for health effects of mercury,” the experts conclude. (7)

Unilever’s actions in Kodaikanal, India, violate several United Nations Global Compact principles. Some of their actions, such as the closure of the factory, may appear to be in line with responsible behavior. However, these actions were taken only after the community exposed Unilever’s wrongdoings. It is unclear what role a UN initiative, such as the Global Compact, actually has in promoting responsible corporate behavior. For some observers it presents yet another set of principles that corporations violate with impunity.

Click here for details about the current status of the campaign.


Nityanand Jayaraman is a writer and researcher based in Chennai.