‘The Forest Conservation Act Is Sacrosanct’ — An Interview with Jairam Ramesh

Prerna Singh Bindra | Tehelka
Jairam Ramesh, the MoEFF has a lot on his agenda 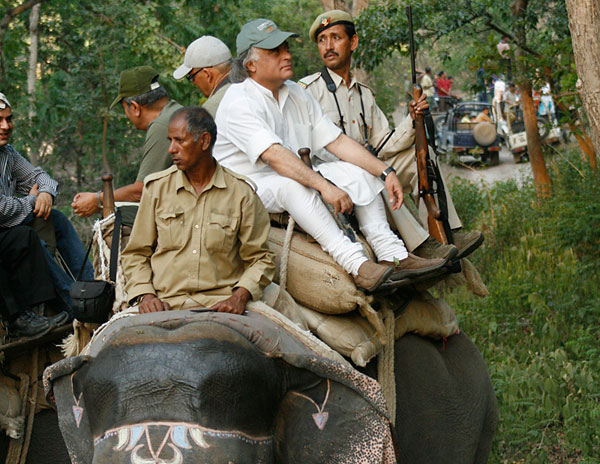 Prerna Bindra
Ramesh atop an elephant in Corbett

The Minister of State for Environment and Forests, Jairam Ramesh has a lot on his agenda, from saving the tiger to stopping illegal mining, finds Prerna Singh Bindra.

It’s an unexpected encounter. The Minister of State for Environment and Forests (MoEFF), Jairam Ramesh, seated atop an elephant, is galumphing through Corbett Tiger Reserve.

When TEHELKA corners the minister in Corbett, he is wearing shorts… and a satisfied smile. He has just seen a tigress “and-a-half” (her cub) who charged the approaching elephant, unconcerned about the VIP status of those seated atop it. It’s the minister’s first tiger, and he is thrilled. He is happy to be here. “It’s so much nicer to be looking at this than at some power plant,” he quips, waving at the fecund forest. Clearly, right now, Jairam Ramesh isn’t bothered about political correctness. He is too busy listening to sambar alarm calls, assessing solar lamps and addressing the need for a comprehensive security plan for Corbett. In a conversation with TEHELKA, Jairam Ramesh outlines his ministry’s strategy for the future.

My acquaintance with the natural world began when I was nine and was gifted EP Gee’s The Wildlife of India. The book is a classic with a beautiful foreword by Jawaharlal Nehru that has stayed with me all these years.

I have long had an interest in the subject. I have been tracking the climate change issue ever since it first broke on the international scene and long before it became a buzzword in India. In my capacity as the power minister, I pushed for clean coal. When I called on the prime minister, he told me that the environment ministry should not become an unnecessary, nontransparent and dilatory regulatory hurdle to growth. I was simply referring to that. The PM is concerned about economic growth. That does not imply overlooking environmental concerns, but integrating them with economic development.

However, we have seen environmental concerns eroding on the fast track to development. TEHELKA exposed how the rejection rate of environmental clearances has been less than one percent in the two years since the new Environment Policy came into force.

Yes, I am aware. In my view, the 2006 legislation was detrimental to our ecological security. Let’s face it: our environmental regulations (including Environment Impact Assessment) today, whether they relate to the environment or forestry, meet industrial and not environmental objectives. Mainly because we lack an effective monitoring body and a culture of compliance. Also, successive governments have seen the environment as a cost to be incurred, not as an obligation to be fulfilled. Yes, there is a need to reform regulations. But we need to make them environment-friendly and not industry-friendly.

So you wouldn’t sacrifice the environment for shortterm economical gains.

I concede that sometimes there must be trade-offs. But fundamentally, economic development and ecological security are linked. You cannot have one without the other. To me, the Gross Domestic Product also reads as Green Domestic Product. Ecological security is really the engine that drives the other compartments — power, health, education. If that engine breaks down, then everything collapses.

The problem in our country is that environmental concern is removed from economic development. The two must be integrated at every stage. For example, when you build a power plant, systems and safeguards to minimise environmental impact must be in place. The other problem is that the environment is perceived to be an elitist obsession. It’s not. If you go back to Mrs Indira Gandhi’s 1972 Stockholm speech, she said that the problems of environment are linked to issues of poverty, land degradation, livelihoods, food and water security. Which is why environmental governance must be integral to our growth.

And what’s your government’s commitment to saving the tiger?

Another concern is the Protected Areas, which are being fragmented by dams and highways despite The Forest Conservation Act, which, essentially, disallows non-forest activities.

The only thing that Mrs Sonia Gandhi told me when I took over the job is that the Forest Conservation Act is sacrosanct. That’s the Bible for me. Fact is, it is this law that has saved our forests. Before the Act, 1.40 lakh hectares of forest used to be diverted every year. Post the Act, it’s down to 31,000. Naturally, there is a big lobby for liberalising this Act under any pretext. I cannot be party to any decision that allows for significant diversion of forest land. I look upon any proposal for diversion of forest area of over 50 acres with a great deal of scrutiny. I have been turning down proposals for water supply projects and highways cutting through forests. For example, the widening of NH-7, which will cut across the tiger corridor between Pench and Kanha, is definitely not going to pass me.

You took up the issue of stopping illegal mining in Bellary in Karnataka. The mining group that’s involved supports the BJP government in the state. Is this politically motivated?
Not at all. I was informed of illegal mining in Bellary forests, which are of high ecological value. I have asked for more information. If it is illegal, it will be stopped, and this applies to anywhere in India, whether it is a BJP or Congress state. I am aware that illegal mining is also an issue in Goa, and a few other states, and these will be looked into.

The Copenhagen conference is upon us. What is India’s stance on the Climate Change debate? Is India doing enough?

I think the MoEF in successive governments has been far too preoccupied with the international dimension of climate change. There is a strong local and national dimension. One side of the issue is international negotiations, but equally important is the domestic agenda. We are seeing the impact — dry cycles are getting longer in India, glaciers are receding, rivers are drying up, agricultural yields are stagnating. We have to do something. We have eight missions outlined in our National Action Plan for Climate Change. I would say these are eight aspirations, which need to be translated into performance- oriented missions, which will, over a period of time, begin to have an impact – else they are meaningless.

The energy sector is going to be crucial to the domestic debate. We need to show the significant difference between the business-as-usual scenario and a climate changesensitive scenario. If you are going to have a GDP growth of eight percent per year, the energy consumption has to grow by seven percent. How you have that seven percent in a climate change-sensitive manner is the challenge. I am a great believer in technology. It is technology that will help us achieve clean coal, more renewables and more energy efficiency in every sphere.

The Green India plan has met with opposition. It is argued that deforestation is one of the biggest contributors to climate change, and the 11,000 crore CAMPA (Compensatory Afforestation Management and Planning Agency) fund must be spent in protecting existing forests rather than dead-end plantations.

I believe forest cover is better than monoculture plantations, for the former are multi-layered eco-systems. Our first challenge is to preserve the existing forest cover, roughly 24 percent, and to improve its quality. Nearly 60 percent is degraded forests, which we must improve to high-density forests. That will have a tremendous impact on carbon sequestration. But India’s targetted 33 percentgreen cover can only come from afforestation.

Hybridisation Threat in the Himalaya