Let’s get to know the Fishing Cat in February! 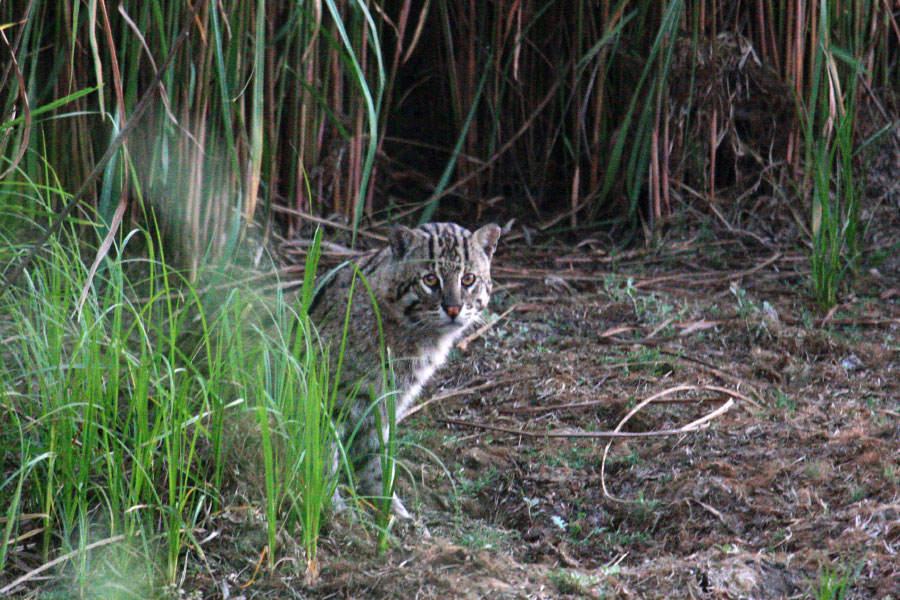 Partha Dey, The Fishing Cat Project
Fishing Cat is an apex predator in the rich wetland ecosystem which provides water and livelihood to local people.
Threats to the Fishing Cat 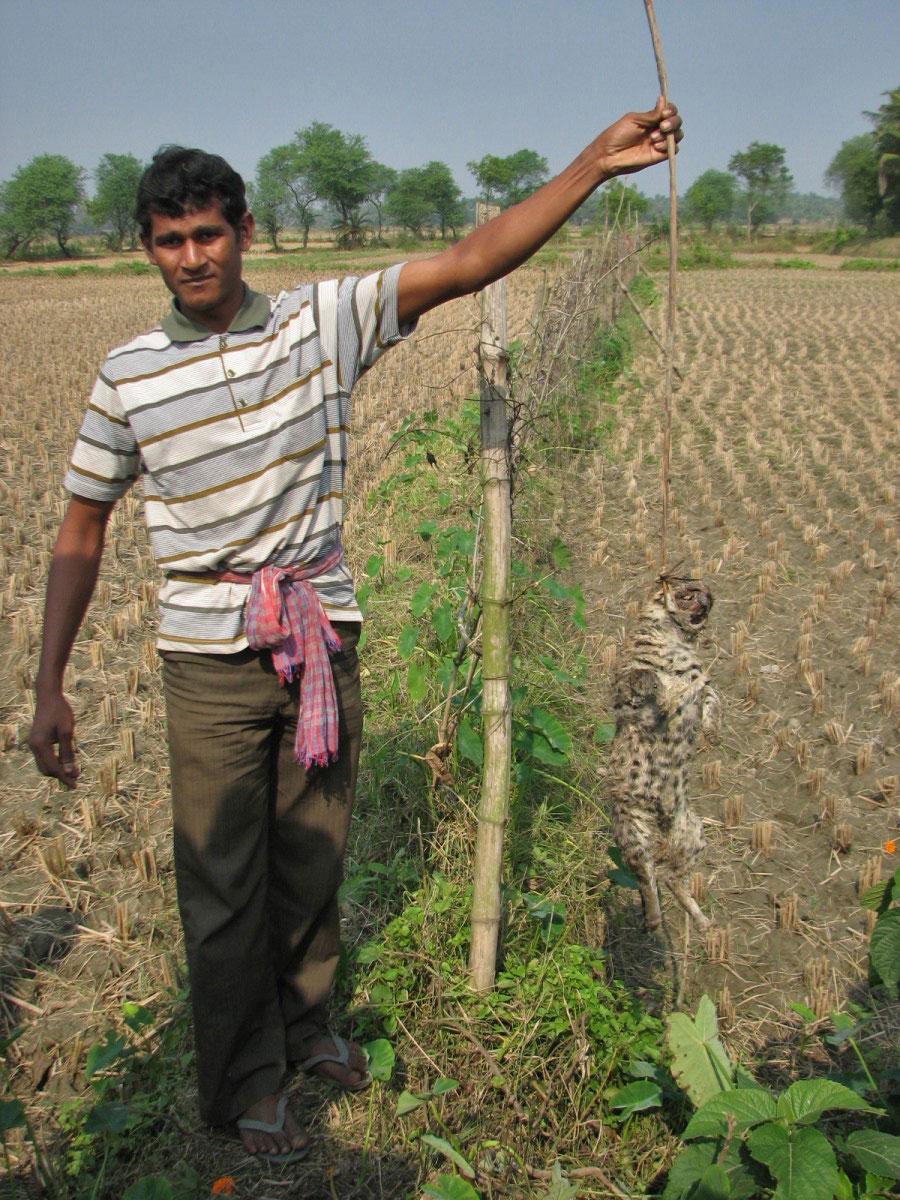 Ovee Thorat
Fishing cats prey on fish from fish ponds, poultry and an occasional goat. A large number of them are killed in retaliatory killing by humans.

The Beautiful Baghrol – A Fascinating Feline

What is the state animal of West Bengal? Many of you may guess, Royal Bengal Tiger, because of the ‘Bengal’ in the name. Or you may remember Bengalis’ love for all things piscine, and say it is the fish! But you would be wrong again, for it is neither the tiger, nor the fish, but an animal associated with both – the fishing cat (Prionailurus viverrinus), locally known as Baghrol or Macchbagha, meaning fish-eating tiger.

Even though it is listed in Schedule I of the Wildlife (Protection) Act, 1972, and accorded the same level of legal protection as the tiger, there is an abysmal lack of knowledge among both lay people as well scientific communities about this unique cat that plays an irreplaceable role in the wetland ecosystem of marshlands and mangroves.

Once found across south and south-east Asia, from Pakistan to the Indonesian island of Java, the fishing cat is on the verge of extinction in many of these countries. It is one of the least studied wildcat species and faces the same threats as other wildcat species, such as habitat loss, prey base depletion, retaliatory killings by humans and poaching.

“Habitat loss due to development activities is the number one threat to the fishing cat.” Says Tiasa Adhya, member of the International Fishing Cat Working Group and Small Wild Cat Conservation Foundation, the global consortium of small cat researchers and conservationists (www.smallcats.org).

Tiasa Adhya, Partha Dey and the rest of their team have been studying the species since 2010, when they started ‘The Fishing Cat Project’. The project played a crucial role in getting the state to declare it the State Animal in 2012.

The Fishing Cat Project team works with local communities in the states of West Bengal and Odisha, which still have viable populations. Their observations and findings have shed light on some unseen aspects of this elusive animal’s habits and behaviour, and their work with communities is showing the way forward for its conservation.

The animal and its ecology

About twice the size of a domestic cat, the fishing cat is primarily a fish-eater but also feeds on rodents and crustaceans, as well as snakes and birds. This nocturnal animal is the apex predator of the wetland ecosystem. In India, it is found in the deltas of the Ganges, Yamuna and Brahmaputra Rivers up to the Sundarbans, the deltas of the Mahanadi and Brahmani Rivers in Odisha and the Godavari and Krishna Rivers in Andhra Pradesh, as well as smaller coastal wetlands along the bay of Bengal.

Fishing cats live for up to 12 years in the wild. Unlike many other cat species, they are very much home in and around water. They can swim long distances, as well as dive for catching prey. After a gestation period of around 65 days, the female fishing cat gives birth to 2-3 kittens, usually during the months of March and April. The mother teaches the cubs how to fish by tapping her feet lightly on the surface of the water. Fish mistake these delicate taps for insect movement, and are attracted upwards, to be pounced on by the cat.

The greatest threat to the fishing cat is habitat loss. The government’s policy of treating wetlands as wastelands is causing a grave threat to its survival. The frantic frenzy of development projects is also destroying many of its prime habitats.

Substantial fishing cat populations live outside protected areas. But these areas are under constant threat due to ever-increasing human encroachments in the form of intensive aquaculture, agriculture and urbanisation. The introduction of these activities is resulting in human-fishing cat conflict, and the loser is always the cat.

Although it is a shy animal and avoids coming into contact with humans, the fishing cat is occasionally known to prey on fish from fishponds, and for damaging fishing nets while raiding them for fish. They are also known to occasionally lift poultry and small livestock. Consequently people reportedly kill them in retaliation. At the same time, there has also been a steep depletion in the fishing cat’s natural prey base because of the conversion of natural wetlands.

The fishing cat is also poached for its skin and meat. In 2015, Tiasa and her team members launched an online campaign to arrest the poachers who killed five fishing cats in Howrah District and blatantly posted pictures on social media with the dead animal. Within the short span of 3 days she received 5000 signatures from 48 countries across the world. Enough pressure was built on the authorities and the poachers were nabbed soon after that. Her campaign showed that it is essential to raise awareness among the general public and government officials to save the species.

Though there is a dearth of studies on the species, conservation efforts at a few places are heartening. Some conservationists are bringing about a fundamental change in people’s perspective towards the animal. It is interesting to know about some of the initiatives taken by The Fishing Cat Project team in Howrah district. They collaborated with the local government bodies at district, block and village levels to form Fishing Cat Protection committees. ‘Know thy neighbours’ is another interesting initiative started by the team in the area. Here, the enthusiastic locals were given camera traps to monitor fishing cats in their surroundings. They were trained to identify different individuals and then encouraged to name them. This initiative helped gather crucial information about the ecology and habits of the species and formed a bond between the people and the animal.

The Fishing Cat Project team also involved locals in scat collection of the species in which the locals found a substantial amount of rodents confirming the role of Fishing Cat in curbing diseases and crop loss. With the team’s guidance, a local NGO, Sarada Prasad Tirtha Janakalyan Samity, also formed a community-owned and managed goat bank. Initially, the Mud-on-Boots project under Sanctuary Nature Foundation provided funds to the local organisation to distribute 39 pregnant goats to 26 economically backward families. The condition was that the families would ‘deposit’ one kid to the goat bank every time a goat gave birth, so that any reported goat lost to fishing cats could be offset by the neighbours themselves. This makes the initiative self-sustainable. While running the bank, the people themselves realised that the actual number of goats killed by the animal is far less than what was believed earlier.

It is inspiring that today, 18 villages from the area have submitted a proposal to the State Biodiversity Board for recognition as a Biodiversity Heritage Site citing provisions under the National Biological Diversity Act, 2002. These experiments could be replicated in other fishing cat habitats in order to strengthen the ties between humans and fishing cats.

As a result of their decade-long work, the Fishing Cat Project has also managed to attract really motivated students who learn the intricacies of conservation in heavily populated districts like West Bengal as well as the latest tools and techniques of researching the cat.
At a time when the fishing cat is losing its fight against humans across its range, we have a chance to provide safety, care and protection to the beautiful Baghrol. Extinction is forever, so let’s prevent it!

A wetland is an area of land that is inundated by water, either all year round or for certain periods of time. The water in a wetland could be static or flowing as well as fresh, brackish or saline. Marshes, swamps and mangroves are all examples of wetlands. A unique ecosystem and home to a rich endemic biodiversity, wetlands provide a number of critical ecosystem services such as protecting our shores from storms, reducing impacts of floods, absorbing pollutants and improving water quality, recharging groundwater, and mitigating the effects of climate change. They are also nurseries for fish and other aquatic life. Besides, wetlands play an integral part in the lives of several communities as a source of livelihood and identity. They are also an important part of our cultural heritage. Unfortunately, despite their immense ecological, economic and social importance, humanity at large has shown little care for them. The recent change in government policy on wetlands has only hastened the process of destruction in India. There are three major threats to wetlands today – development projects, pollution, and encroachment. They each need to be tackled, and the sooner the better!


Parikshit is an Aurangabad-based freelance journalist and translator.