During my recent visit to the famous Sukhna lake in Chandigarh, it was shocking to see visitors blatantly feeding snacks to migratory birds. Ducks like Common Pochard (Aythya ferina) and Common Coot (Fulica atra) were fed with biscuits, chips and popcorn, and hence kept flocking close to the lake shore. This is a growing problem in India where citizens indulge in the feeding of avian fauna like gulls, treepies and several other species due to lack of awareness and sensitization. … Read More

I visited Arunachal Pradesh recently for birding, and was enthralled by its beauty. The dense green mountains looked as if they were playing hide and seek with the moving clouds. The place was alive with the continuous chirping of birds. It was like being in paradise. We traveled from Nameri to Dirang and stopped at several places for birding. What really disturbed me was the pile of garbage that we saw in most places. Of the many places that I … Read More

Olive Ridley Sea Turtles (Lepidochelys olivacea) are the smallest and the most abundant sea turtles found in the world. These turtles are known for their mass nesting called Arribada, where thousands of females come together on the same beach to lay eggs like in coastal Odisha. Though found abundantly their numbers have been declining rapidly over the past few years and the species have been recognized as vulnerable by the IUCN red list.

On Oct 13, 2012, in the evening, we saw this jackal feeding on termites by the road side in Cauvery Wildlife Sanctuary. The jackal did not seem to be bothered by our presence, though vehicles passing by would scare him. He would hide and come back out to feed when it was safe.

We visit Cauvery Wildlife Sanctuary regularly for our volunteer work. Over time, we have observed some positive changes due to the good work by the DFO, Mr.Vasanth … Read More

This image was taken in Nagarahole Tiger Reserve in Karnataka on 9th May 2010. There is a sign board in which the fourth and fifth points warn tourists of the dangers of plastics. Ironically, there is an open concrete trash pit right below the post and a sambar and some monkeys are feeding from the waste containing paper and plastic.

In many wildlife preserves across the country, visitor and information centres contain such crude methods of trash disposal which inevitably … Read More

In spite of all the advisory messages provided by the forest department to the contrary, tourists choose to feed wildlife without understanding all of its impacts. It is a shame to see these langurs, usually shy, approach vehicles for food. This was photographed in Mudumalai Tiger Reserve.… Read More

This was photographed early in the morning at Nandi hills (near Bangalore), a good birding destination with an evergreen forest patch on the top.

A Bonnet Macaque that lives in the wild, with no human interaction is a docile, shy creature. As a stark contrast, the ‘monkey’ that all city-folk know exhibits the exact opposite behavior – aggressive, thieving, angry, and dangerous even. The way this intelligent, curious species has adapted itself to whatever environment it has been introduced to … Read More 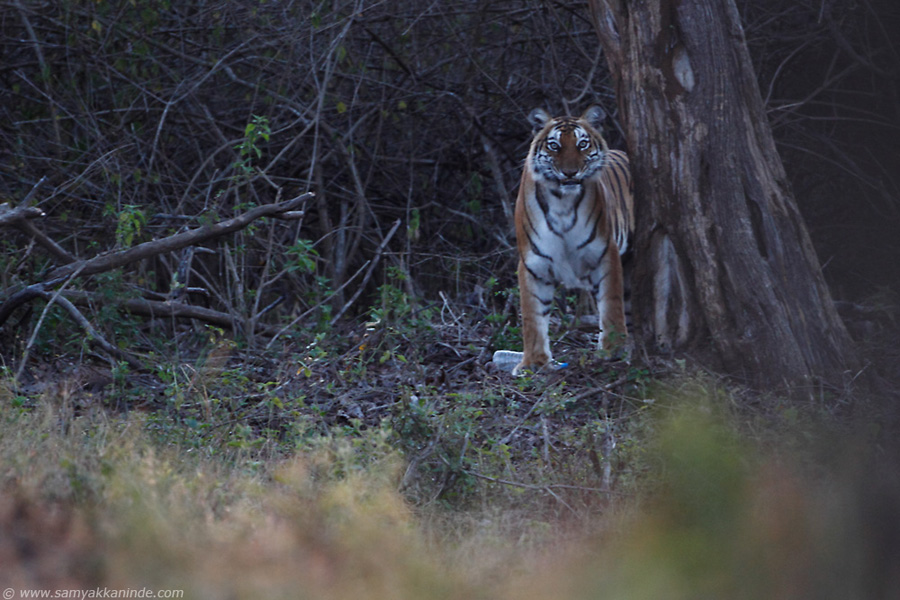 Tiger and a plastic bottle, Bandipur