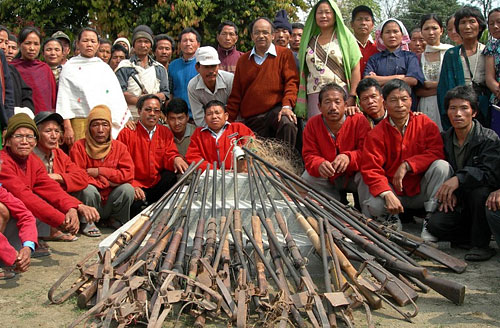 Nandini Velho
Tana Tapi, the Pakke's DFO helped village heads implement the law. So far 36 country guns have been seized from the villages and deposited with the authorities.
At Pakke Tiger Reserve, in Arunachal Pradesh, Nandini Velho learns how a hunting tribe can be partner in conservation.

I am often witness to and a part of small disasters while in the field, but I learn something each day that keeps me going. I still remember the day we spent five hours pulling our Maruti Gypsy out of the dirt track. We were on our way to Pakke Tiger Reserve in East Kameng district of Arunachal Pradesh. To make matters worse, Tana Tapi, the tiger reserve’s divisional forest officer and I were blaming each other for accelerating in the neutral, making the tyres sink deeper in the mud.

We managed to reach Langka, a small village fringing the tiger reserve. At the tail-end of the day, I witnessed the implementation of an extraordinary initiative. Two village heads wearing red coats were going to nab a young boy for using dynamite to catch fish. Tana Tapi figured out what was happening, and helped village heads implement the law. He told me how he tried to involve the Nyishi tribe in wildlife conservation around this tiger reserve nestled in the Dafla foothills.

The reserve is home to a healthy population of tigers, the pied warty frog that hides from predators using a camouflage of bird droppings and endangered species like the white-winged wood duck. The park has a history of extra ctive regimes that undertook timber lo gging and gave leases for cane extract ion, and the Nyishis are a hunting tribe living on its fringes.

Given this backdrop, winning their support was going to be challenging, yet paramount for effective wildlife conservation because Pakke was a hunting reserve till 2001. It was declared a tiger reserve only in 2002 and the species have survived thanks to initiatives of park authorities.

Tani Tapi formed the Ghora Aabhe which means village father in an Arunachali dialect. Formed in August 2007, the body borrows from and mirrors the administrative and traditional practices already in place at the local level. The village elders or gaon burrahs play a major role in development and possess legal powers. Kebang or a group of gaon burrahs settle disputes and pass verdicts.

Tana Tapi recalled how people would insist that hunting was their tradition. It was customary for gaon burrahs to own licensed 12 bore single or double barrel guns for hunting. Tana Tapi had many meetings with the gaon burrahs from villages fringing the park. All 25 gaon burrahs were
present during initial stages of the discussion where he spoke to them about their responsibilities that included intelligence gathering, reprimanding offenders and reporting offences to the forest department. Only 16 agreed to support the initiative.

Reactions of villagers towards conservation were mixed. In the northern boundary of the park, village elders have still not embraced the Ghora Aabhe; they say the terms and conditions of the body infringe on their traditional practices.

Women self-help groups, formed in 2007, alert authorities about poaching to Ghora Aabhe or the park authorities. Half the collected fines go to these groups. This makes reporting of illegal activities a positive feedback mechanism, which is financially sustainable.

So far 36 country guns have been seized from the villages and deposited with the authorities. Offenders are handed over to the forest department. Initially, men were against women joining this initiative because these duties lay outside the realm of household chores; they prevented their women from attending these meetings alone.

Today, every married woman is a self-help group member. This was an entirely voluntary effort that replicated frameworks present in other districts of Arunachal Pradesh, but absent in and around Pakke. Later, the mantle was handed over to the district rural development agency and the panchayat leaders who financially supported these groups.

It is common to hear of men in Pakke who are afraid of the more chatty and forthright women. Nearly 17 women self-help groups and 16 village elders from nine fringe villages that comprise the Ghora Aabhe have adopted stringent norms and impose heavy penalty on offenders. For example, hunting of tigers, placed on Schedule 1 of the Wildlife Protection Act, can result in a fine of Rs 50,000, in addition to the prescribed penalty by the Wildlife Protection Act. The initiative was sponsored by the Wildlife Trust of India.

Park authorities, using Project Tiger and the aid for developing sanctuaries, have adjusted an honorarium for the gaon burrrahs. The district administration, which was paying Rs 150 a month to the village elders, raised the amount to Rs 1,500, enabling them to work full-time. Conservation biologists have adopted a multi-pronged approach. Tani Tapi never forgot the mandate of this initiative.

Since local communities have maximum stake in wildlife conservation, such programmes are an important step. Authorities have made conservation everybody’s responsibility and Ghora Aabhe is a successful model. Earlier, the Nyishi would burst dynamites in rivers to catch fish and hunt elephants. Not anymore.

What I learnt that day was that as conservationists, our goals need to be defined, focused and measurable. In our enthusiasm to go to new areas, work with new tribes and provide sustenance options to them, we often lose focus on wildlife conservation. Tana Tapi, his anti-poaching staff and the village fathers are the lead authors of Pakke’s changing history and I am fortunate to have had the opportunity to learn and narrate their stories. 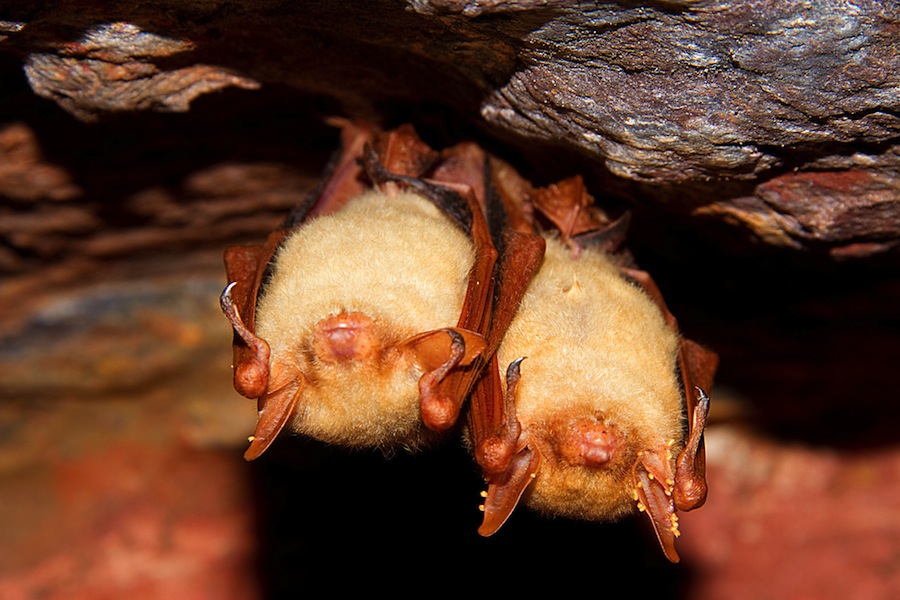