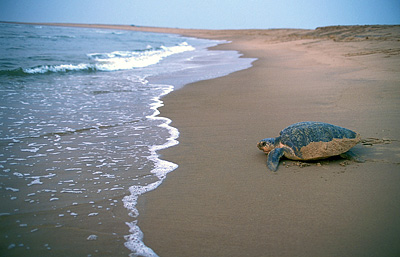 When two powerful entities such as the World Bank and a State Government agency make an expensive ecological blunder, what are the chances that they can be persuaded to undo the damage? In the south Indian state of Tamil Nadu, a massive coastal plantation project initiated by the two was about to permanently destroy sea turtle nesting grounds. Would a small group of conservationists be able to make them see sense? Shekar Dattatri recounts the untold story of a campaign that made quiet history.

After the Asian Tsunami in December 2004 the World Bank funded a massive Emergency Tsunami Reconstruction Project (ETRP) in the south Indian State of Tamil Nadu. One of the measures, proposed and implemented by the Tamil Nadu Forest Department (TNFD) – reportedly at a cost of about 40 crores – was the raising of ‘bio-shield shelterbelts’ on the State’s coastline by planting Casuarina, an alien tree species that grows well on sandy soil. The TNFD claimed that the plantations would act as a barrier to future tsunamis and provide protection to people and structures on the landward side. The shelterbelt plantations under the ETRP project covered over one third of the Tamil Nadu coastline and were established right up to the high-tide line in many places. The problem is that the Casuarina plantations created a severe threat to a Schedule I species, the olive ridley sea turtle (Lepidochelys olivacea), which uses the wide, sandy beaches of the Tamil Nadu coast for egg laying.

This one act of planting Casuarina right up to the high tide line eliminated nesting habitat for sea turtles virtually along the entire Tamil Nadu coast.

In late 2007, Akila Balu, a coordinator for the Students Sea Turtle Conservation Network (SSTCN), Chennai, and also a volunteer on WWF’s ‘Green Coasts’ project, was asked by WWF to assess the ETRP plantations and their potential impact on the coast.  Akila used to participate in turtle walks as a college student and therefore had a deep interest in sea turtles. She had recently returned to India after many years abroad and had assumed the responsibility of coordinator of the SSTCN.

As a first step in her assessment she wrote to the Divisional Forest Officers (DFOs) of the coastal areas of the state and requested and received reports on the extent of Casuarina plantations in their respective divisions.

Alarmed by the scale of the plantation work, Akila met the Principal Chief Conservator of Forests (PCCF) of Tamil Nadu – an officer who was held in high esteem by many – and expressed concern about the impact of the shelterbelt plantations on sea turtles.  She made it clear that while she had no objection to the shelterbelts per se, she was deeply concerned about any planting of Casuarina in the nesting zone. The PCCF’s response is summarized below.  My notes on his response are in parentheses:

Akila’s plea that olive ridleys needed open sandy beaches for nesting and would not lay eggs amidst the Casuarina, and the fact that only eggs laid on open beaches would get enough of the sun’s warmth to hatch failed to interest or move the PCCF.