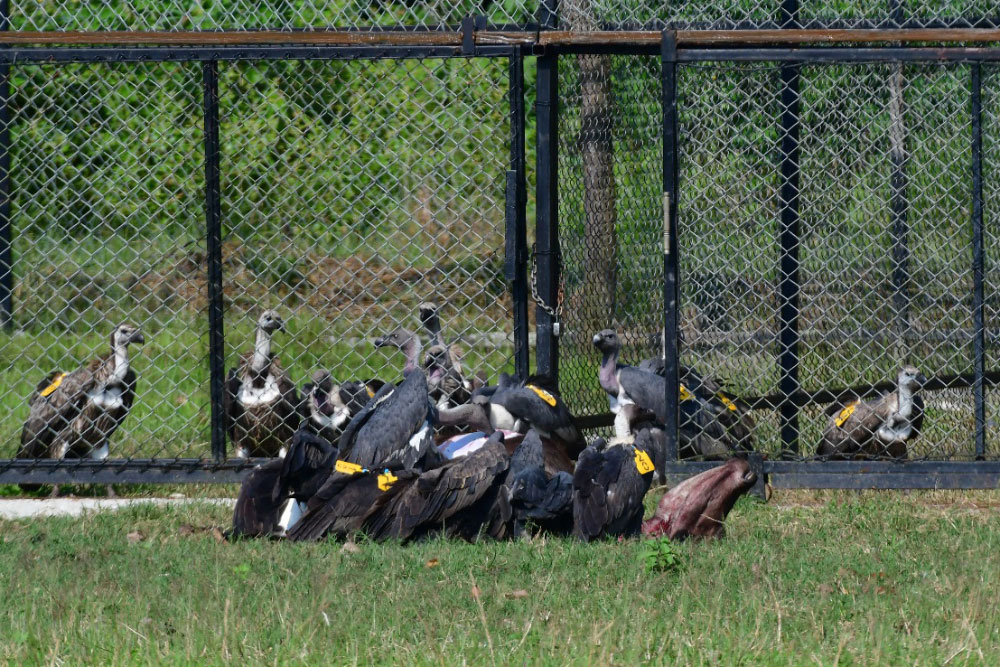 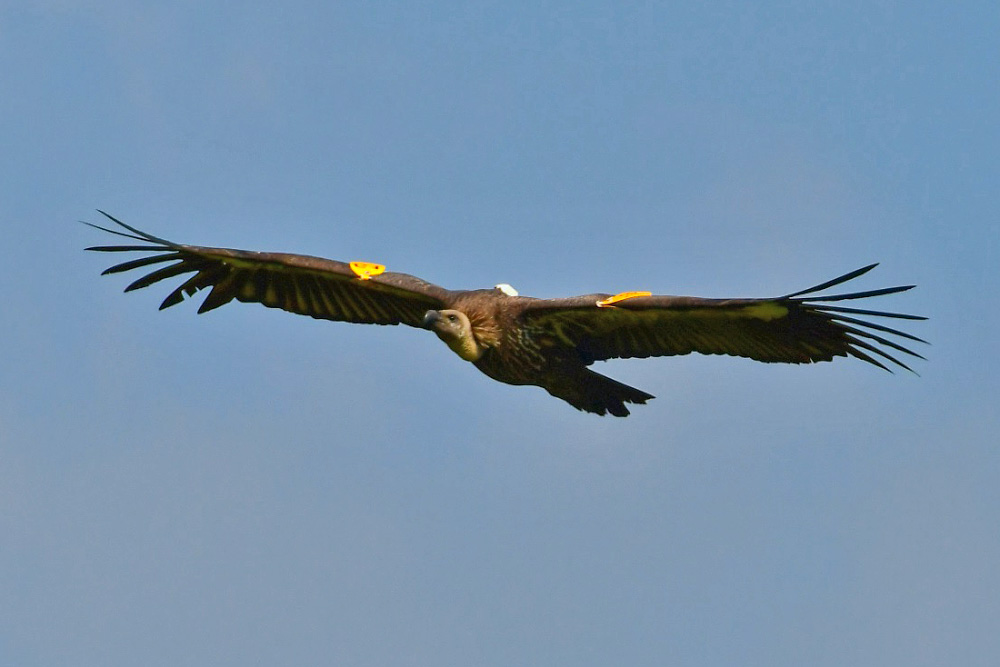 Rajendra Gurung / BCN
It's amazing that the veterinary use of diclofenac has been stopped in Nepal.

Nepal and Asia witnessed a further landmark for vulture conservation on 17th September 2018, when the Government of Nepal and national and international conservation organisations released 12 critically endangered White-rumped vultures (Gyps bengalensis), including the first eight birds actually hatched within the conservation breeding programme. Releases last year of birds reared (but not hatched) in the programme have so far shown very promising signs of survival and success, and in addition, 20 wild birds have now been satellite-tagged – 11 in 2017, and a further 9 just prior to this release.

The work is a truly collaborative effort of many partners, led by Bird Conservation Nepal (BCN) and the National Trust for Nature Conservation (NTNC) together with Chitwan National Park and the Department of National Parks & Wildlife Conservation (DNPWC). The Director General of DNPWC and a small group of officials, scientists and community leaders watched as the BCN team quietly opened the doors of the release aviary using a remote pulley system. Six of the twelve vultures exited the release aviary and joined the wild birds feeding on the buffalo carcass almost immediately, and all twelve came out within half an hour. Six of the birds later returned inside the aviary where they chose to spend the night, but immediately flew out again the following morning. The release site is at the village of Pithauli, Nawalparasi, close to Nepal’s Chitwan National Park.

“This is a world first for the release of white-rumped vultures actually bred in the Nepal breeding centre and is a major step for establishing secure wild populations now that we are confident that the veterinary use of diclofenac has been stopped in this country” said Mr Man Bahadur Khadka, DG, DNPWC.

The previous week, two experts from the UK (Royal Society for the Protection of Birds (RSPB) and Forestry Commission) together with the BCN team had fitted satellite tags to the birds with carefully designed harnesses (using the thoracic cross-hatch method), ready so they can be monitored after the release, and give us vital information about their movements, and any problems or causes of mortality. The team also caught and tagged nine wild white-rumped vultures, which are being monitored, to compare their movements and behaviour with the released birds.

“The monitoring of the satellite-tagged birds is an important way to understand how well the birds are surviving, and to assess the safety of the “Vulture Safe Zone” said Ishana Thapa, CEO of BCN. “If these and the previously tagged birds all survive then this is a further sign that the vulture conservation efforts are working”. Krishna Bhusal, BCN’s Vulture Conservation Program Officer of BCN added: “Releasing vultures, hatched in captivity, in this location, combines our in situ and ex situ efforts to save these birds, and the process of keeping the birds in the pre-release aviary for several months before release allows them to adjust and interact with wild birds – This is an exciting day for me and all Nepal”.

Chitwan’s Chief Conservation Officer, Bed Kumar Dhakal said “We are proud that the vulture breeding at the Breeding Centre in Chitwan National Park has taken off, with nine chicks last year and six more in 2018”. Jemima Parry Jones, UK birds of prey expert from the International Centre for Birds of Prey (ICBP) who advises the project said “Breeding and releasing these birds is a great credit to all involved, and shows how a combination of international and national partners can work successfully together to achieve very significant results. The huge success of the VSZs has meant we can have these amazing releases and aim towards all the vultures being back out in the wild by 2023”. Craig Pritchard, senior vet representing ZSL said how the birds all appeared to be in very good condition, and how pleased and privileged he felt to be part of this joint collaborative effort. Briefing and speeches of the release immediately beforehand. Photo: BCN

Briefing and speeches of the release immediately beforehand. Photo: BCN Mr DB Choudhary, the local conservation community leader added “The Nawalparasi community is proud that their area has been selected for this historic release, following a series of vulture conservation initiatives in the area including running the vulture-safe feeding site here since 2006”.

Chris Bowden, RSPB and Saving Asia’s Vultures from Extinction (SAVE) Programme Manager said “The successful removal of veterinary diclofenac across Nepal thanks to a lot of hard work, is the real reason behind the success so far and without this we couldn’t have gone ahead. These are the first ever Asian vultures to have been hatched and bred within a breeding programme and taken to the concluding phase of release to the wild. This illustrates the rationale behind these efforts and if enough birds survive without encountering killer veterinary drugs, we will be on track to release all the birds by 2023”.

The vulture conservation work in Nepal is carried out with the full support of DNPWC, and led by BCN. The breeding centre was established in 2008 and is jointly managed by NTNC and Chitwan National Park. The main funding (and technical) support has come from the RSPB, but significant resources also come from all organisations involved as well as the Zoological Society of London (ZSL) who provide veterinary support and helped with funds for the release aviary, and also from the International Centre for Birds of Prey (ICBP) in the UK.

Calendar of the Nepal white-rumped vulture release programme so far:

What are the implications for vultures and releases in India?

Vulture releases have only been possible in Nepal because the levels of diclofenac use by vets have declined to almost zero in most of the country. Also, the other dangerous veterinary drugs: ketoprofen, aceclofenac and nimesulide are being used by very few Nepalese vets, whilst meloxicam, still the only similar drug known to be vulture-safe, has increased in popularity with vets and pharmacy outlets.

It is hoped that similar releases can go ahead in India within the coming year, once toxic drugs have been fully monitored, and a green light can be given by all concerned. The urgency for the safety-testing being carried out by the Indian Veterinary Research Institute (IVRI) of these similar veterinary drugs is paramount, so that more safe alternative drugs can be identified for the vets, as well as preventing the licensing of any toxic drugs which may take the place of diclofenac and further threaten the vultures.


Chris is Vulture Programme Manager for the Royal Society for the Protection of Birds (RSPB) and for Saving Asia’s Vultures from Extinction (SAVE). 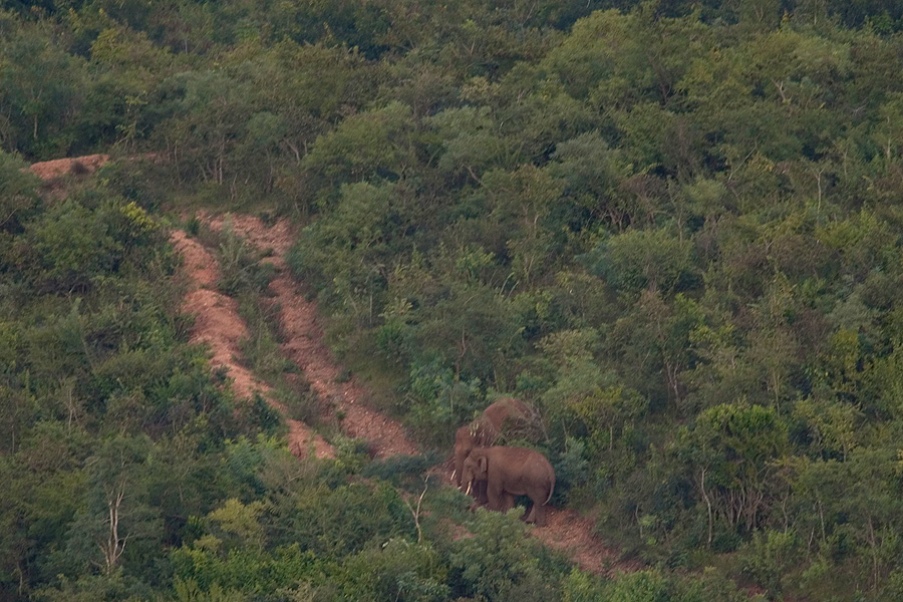