Addressing the Elephant in South Bengal 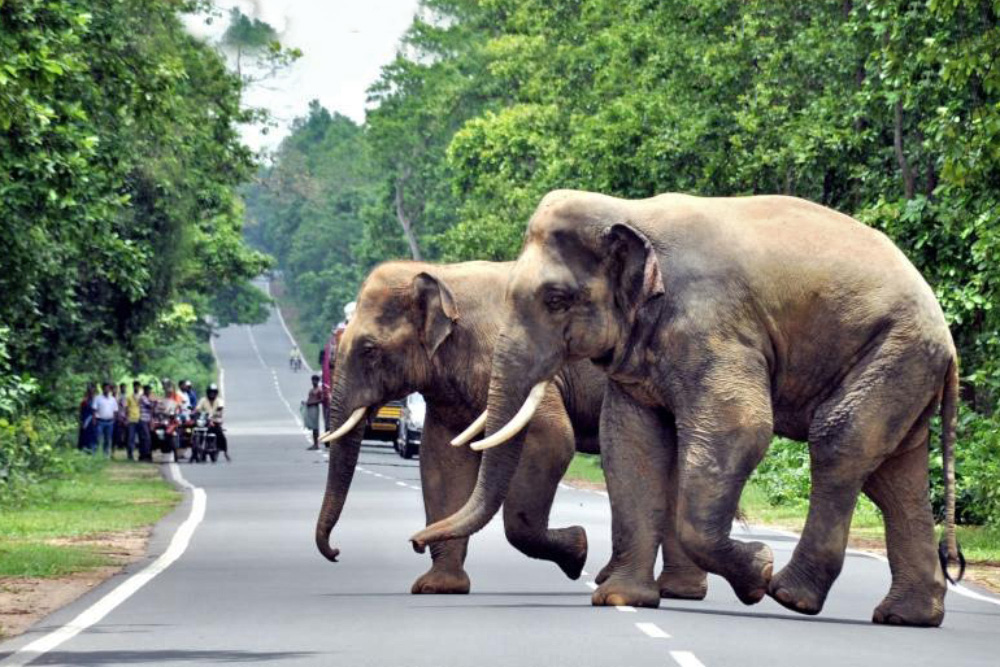 Kumar Vimal
Chasing away elephants by scare tactics causes more damage as the herd splits into smaller groups and runs in various directions.

Harvest season has ceased to be a time of festivities for the rice-growing farming communities living in West Midnapore, Bankura and Purulia districts of South Bengal. Due to their geographical location adjoining the dense forests of Jharkhand and Odisha, these districts attract herds of elephants that migrate during this season to raid crops after nightfall. These incidents threaten both life and livelihood. According to S. Kulandaivel, Deputy Conservator of Forests, Urban Recreation Forestry Division and a former Divisional Forest Officer, Bankura (North) Division, “Due to depletion of natural food habitat in the forests, elephant herds have extended their habitat to cropland and changed their food habits. The animals now survive on agricultural crops (paddy and wheat) to juicy palatable vegetables and fruit crops like cucurbits, cabbage, cauliflower, potato, brinjal, colacacia, banana, sugar cane and jackfruit, which are commercial cash crops and vital to the local economy.”

Elephant depredation is becoming a grave concern due to the considerable damage and destruction taking place in these districts. As per the forest department’s records, in 2015, Bankura faced 1,598 hectares of crop damage and destruction of 1,677 houses by elephants. In the same year in Midnapore, wild elephants damaged over 500 hectares of cropland. The villagers were paid a total compensation of Rs.1.21 crore.

The human-elephant conflict has become a major socio-economic and political issue with villagers in conflict-prone areas making the forest department accountable for their inability to restrict wild elephants. Mitigating these conflicts has become increasingly difficult due to the rising elephant numbers over the years. However, information from the office of Principal Chief Conservator of Forests (Wildlife) reflects that Rs.6.08 crore was allotted to compensate for animal depredation during 2016-17.

As per historical records, prior to 1900, South Bengal had dense Sal forests that housed elephant herds. However, rapid deforestation in the early 20th century depleted the vast Sal reservoir thereby causing the elephants to leave the region for several decades—till the 1980s to be precise. In 1976, there was a single elephant sighting—a herd of 42 elephants migrated from the sanctuary to Sindri in Purulia district. They roamed around for 20 days, destroyed paddy crops and killed 2 people.

According to the forest department, elephant herds from Dalma Wildlife Sanctuary in Jharkhand began migrating to south West Bengal from 1987 onwards. Based on observations made, approximately 20 to 50 elephants would arrive in September and return after winter. Kulandaivel makes an interesting observation about the villagers’ initial treatment of the elephants as deities: “The villagers believed that the crop yield in the areas where elephants were sighted would be much higher than the unvisited fields and villagers were enthusiastic enough not to demand compensation for crop damages. But over the years, the damages to cropland and villages by visiting herds increased, escalating to a menace the villagers are facing today.”

The reason for the return of these herds to West Midnapore, Bankura and Purulia after decades is rather ironic. An afforestation drive carried out by the forest department and local communities in a joint forest management (JFM) programme has led to an increased green cover which provides shelter to the ever-increasing number of migratory elephants. What these elephants lack is food or water to sustain themselves; that has led to them raiding crops in villages that have multiple crops all year round facilitated by modern irrigation projects.

Nilanjana Das Chatterjee has authored the book Man-Elephant Conflict: A Case Study from Forests in West Bengal, India (2016) in which she writes, “Incidentally, the elephants’ migration was aided by the success of forestry projects in West Bengal, under which large patches of degraded forest were turned into regenerated forest. These forest patches provide corridors for movement and convenient shelter to elephants.”

Subhamay Chanda is the Chief Conservator of Forest, Special Development Project, who has also done a study on human-elephant conflict in south Bengal from 2009 to 2012. He says, “With the afforestation, these areas also witnessed a revival in crop quality providing a suitable habitat for the migratory elephants. A change detection study based on satellite data from 1988 to 1991 for Midnapore, Bankura and Purulia districts confirmed an increase of 315 sq. km in forest cover.”

Chanda explains, “Both JFM and irrigated agriculture provided adequate cover as well as assured food for the migrating elephants whose number increased gradually. This had a direct effect on increase in number and size of migratory herds and their prolonged stay leading to increased man-elephant conflict, greater incidences of crop and property damage and higher rate of injury and human death.

Initially, the herd from the Dalma Sanctuary would come up to Jhargram in West Midnapore, their movement restricted up to the western bank of river Kangsabati. Later, the herds started crossing the Kangsabati and spending most of the time in the eastern part of the river as this area was fertile with food and water in abundance.”

With each passing year, as the migratory herds kept expanding their numbers, they began pushing deeper into south Bengal, even crossing over to Burdwan district.

There are an estimated 140-150 elephants in south Bengal of which about one-third return to their home in the Dalma hills in Jharkhand. But the majority stay back due to the easy availability of food and water. “In the 1990s, small elephant herds from Dalma visited these southern districts for a very short period of time but now, not only they are four times stronger in number but are also staying throughout the year in south-west Bengal. Thus, they should be called south Bengal elephants,” says Kulandaivel.

Unfortunately, to combat this issue, people in some parts of south Bengal started clearing forest patches to prevent the elephants from hiding near the villages and farmers left their land uncultivated to avoid damage by elephants. Elephant-proof trenches (EPTs) were built at about Rs2 lakh per km to halt interstate movement of elephants. However, experts say EPTs might be causing more harm than good as it cuts off the traditional migratory routes of the elephants.

Chatterjee writes, “Initially, only the Dalma herd invaded the southern Bengal area, but a forest department report states that another herd which migrated from Odisha through the Mayurjharna Elephant Reserve area have not been able to go back to its original habitat due to the construction of elephant-proof trenches (EPT) along the Odisha-Bengal boundary. This herd is identified by its physical appearance—shorter in stature and a lighter colour compared to the Dalma elephants. Their depredation is more harmful than that of the Dalma herd.

Hullah party, a village task force specially trained by the forest department, is driving elephants away from agricultural fields. A hullah is a 3-4m pole of iron or sal wood the tip of which is wrapped with jute or cloth and soaked with kerosene or diesel. The leader of the group ignites the tip of the hullah and chases the herd till they are driven away from the crop fields. Along with the hullah, they also use firecrackers and fireballs supplied by the forest department. However, crop fields are trampled and damaged by the herd during the chase.”

Kulandaivel is a strong critic of the hullah method. “You may plan driving operations with hullah parties and hired labourers, but you never know how effective or successful it will be. A section of hullah party, a self-interested group, often disrupts the plan by dispersing elephants into unmanageable smaller groups towards undesired places to keep the elephant herd for longer days. By doing so, they get more wages through the driving operation, which is considered to be much more remunerative than any other labour work.” A hullah worker is paid Rs. 284 per day.

Chatterjee cites three conflict points owing to movement of elephants: “Damage, or loss of life or property; damage or death of elephant population; and vulnerable situation of forest staff because of assault by the villagers and attack by elephants during the chasing of elephants.”

Over the years, measures adopted to address the issue—using physical barriers, crop guarding and scaring or driving them away by throwing stones or bursting crackers— have proven futile.

Pradeep Vyas, Principal Chief Conservator of Forests, Wildlife and Chief Wildlife Warden, West Bengal talks about some of the initiatives and measures underway, “If we look at the conflict scenario in the last year, on an average, two elephants killed one person. The problem is on the rise as there is no natural habitat for elephants in south Bengal. However, the forest division has formed an Elephant Movement Coordination Committee (EMCC) to tackle this menace. The EMCC brings together officials of different districts through WhatsApp groups and email exchanges, updating a herd’s movement. A special human-wildlife conflict mitigation cell has been established which sends out bulk SMS alerts to villagers warning them about a particular herd. This is an early warning system to prevent human casualty.”

On the matter of speeding up compensation payment he adds, “In the case of deaths, we are giving 80% of the compensation on the spot and in case of crop damage, within two months.”

S.S. Bisht, former director of Project Elephant, a central scheme aimed at protecting elephants, their habitat and corridors, says, “The root of the elephant problem lies in Jharkhand. Large-scale clearing of forests and mining activities in the state have displaced elephants from their forest home. The Subarnarekha canal, a joint project by Jharkhand, Odisha and West Bengal has cut off old migratory routes. To tackle the problem in south Bengal, there should be separate plans for solitary bull elephants and herds. Herds need to be driven away while bulls need to be captured in a systematic manner over the course of 5-10 years. There is a demand for captive elephants in forestry work in north Bengal where they should be translocated and trained.”

In 2016, the Bankura division had some success in restricting herd movements and limiting damage to crops and lives. “The elephant-human conflict cannot be dealt separately state-wise. If we want to conserve this mega-fauna, we have to look at the entire region—the east-central landscape and come up with a strategy. A committee has been formed to draw short- and long-term plans,” says R.K. Srivastava, director, Project Elephant.

Some of the mitigation measures currently underway include –

While elephant-detection warning systems and drones to locate wild herds feature on the list of things to come, until then, elephants continue to move freely within these districts searching for crops, and at times finding themselves amid conflicts when they interact with human life.