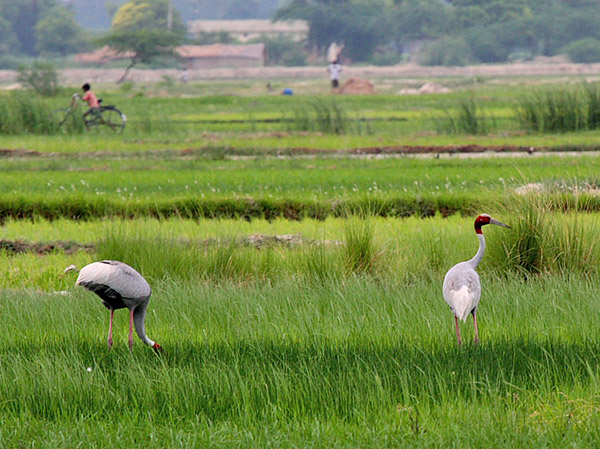 The tallest flying bird in the world – the Sarus crane – thrives in the intensely cultivated floodplains of Uttar Pradesh. Can the birds withstand the pressures of a country on the fast track to development?

The fertile Gangetic floodplain has supported dense human population for centuries—much of the land is cultivated, having been converted almost entirely to small-holder farmer systems at least 300 years ago. Despite these pressures, the world’s largest known breeding populations of sarus cranes and black-necked storks are found in these very rice fields.

Sarus cranes require wetlands, and good rainfall, to breed each year. Since 1998, the progress of the birds has been monitored by researcher Gopi Sundar in southwest Uttar Pradesh, in districts Etawah and Mainpuri. He has also monitored the status of wetlands in each breeding pair’s territory. Rainfall data were collected annually to assess how variations in rainfall patterns affect Sarus breeding success; rainfall in this area is predicted to occur more frequently due to climate change. The results of the survey clearly identified two big threats:

The field data collected from the long-term study showed that Sarus pairs did better in raising chicks in areas that had more wetlands in their territories and in the years that had normal to high rainfall.

To understand which factors were most detrimental to the cranes, the data was entered in a computer program to simulate future trends. The modelling showed that the crane population in Etawah and Mainpuri would halve within a decade if development continued at the pace it did during the study. It also showed unequivocally that change in land use and wetland loss was by far the most important aspect that required conservation attention. Changes in rainfall patterns were not as important.

Fortunately for the cranes and the farmers, shifts in political power and improved attention to farmers’ needs have halted rapid development in Etawah and Mainpuri. In addition, a revision of the Land Act now states that multi-cropped irrigated agricultural lands cannot be converted to other land uses. The Land Act is currently tabled in the Indian Parliament and carries the power to secure the future of farmers and cranes alike.

In addition, the Supreme Court has recently announced that community areas, like the wetlands in Uttar Pradesh, cannot be converted to agriculture or other forms of development. This aids farmers and village councils to prevent roving developers from converting important wetlands.

KS Gopi Sundar’s scientific paper on factors affecting long-term Sarus crane breeding success is published in the journal Biological Conservation. This is the first long-term study to provide unequivocal evidence of the relative importance of habitat over changing rainfall for crane conservation, and only the second such study globally for any bird species. He is currently associated with the International Crane Foundation as Program Director, SarusScape.


Gopi Sundar traverses agricultural landscapes with Sarus Cranes in north India exploring the conservation needs of the plethora of diversity that is retained in intensively farmed areas. He is a Director for the Program SarusScape of the International Crane Foundation. 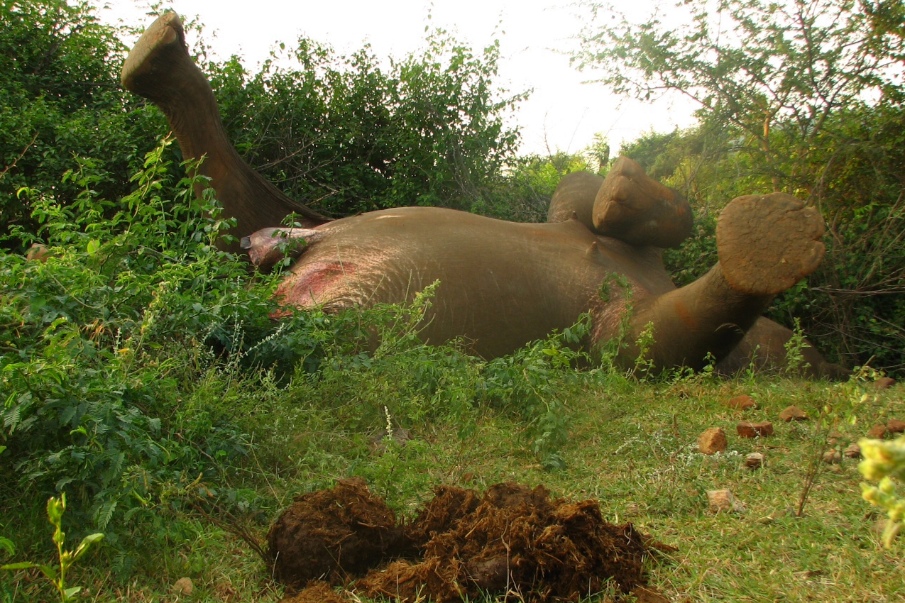