A panther caught in a snare made out of brake and clutch cables near Sholayar Dam in the Anamalai Tiger Reserve, was freed by forest officials. The panther was found hanging with one of its legs caught in the snare which was tied to an immovable object. The animal was tranquilised and freed from the snare. In its attempts to free itself, the panther had suffered leg injuries. The injuries were treated and the panther released into the forest on … Read More

Residents of around 14 hamlets in the Masinagudi Panchayat observed bandh on March 9th, protesting against lack of clearances from the forest department for developmental activities. Many hamlets, being adjacent to reserve forests have been identified as elephant corridors or as tiger reserves. According to the president of the Forum against Harassment by the Forest Department, the demands include the setting aside of GO 145 (identifies Mudumalai Tiger Reserve core area as 321 sq. km) and implement GO 50 (where … Read More

A five-foot long dolphin weighing more than 150 kgs washed ashore the Marina beach in Chennai. It appeared to have died from serious head injuries. The range officer who examined the body said that it could have died due to an injury from a trawler. Supraja Dharini, the founder of an NGO called Tree foundation says that this is the third such incident in Chennai in the past three months. She said that in-depth studies must be carried out to … Read More

An undercover officer from the Forest Department was shown the skins of a Tiger and five leopards (including a black panther) in Pollachi, by a man named Jailani who demanded five crores. The officer was from a team of plainclothes Forest department officials, who were acting on a tip off. After the skin traders ultimately agreed to sell all the skins for a sum of one crore, the officer told them he had to consult with his friends, after which … Read More

When two powerful entities such as the World Bank and a State Government agency make an expensive ecological blunder, what are the chances that they can be persuaded to undo the damage? In the south Indian state of Tamil Nadu, a massive coastal plantation project initiated by the two was about to permanently destroy sea turtle nesting grounds. Would a small group of conservationists be able to make them see sense? Shekar Dattatri recounts the untold story of a campaign … Read More

CHENNAI: The air intelligence unit of customs on Wednesday seized 23 kg of peacock tail feathers from a Singapore-bound passenger at Chennai airport. The officials, during routine profiling, found the movements of M Sethuraman of Washermenpet, going by a Jet Airways flight, suspicious. He was intercepted while passing through the customs facilitation counter after the immigration check.

When customs officials grilled him, he said he was carrying nothing but used clothes and personal effects. The officials, however, weren’t convinced and … Read More

A recent announcement, however, … Read More

A tiger skin was seized in Kolhapur, Maharashtra on 1 June 2010, in an operation by the Panhala police. Three people were arrested, all residents of Kolhapur in Maharashtra. The skin was allegedly obtained from a contractor and is said to have bullet marks on it. The adult tiger was apparently killed three years ago. A fourth accused was arrested yesterday.

A wild gaur that fell into the ground level farm well died at Kovil Athupatti village at Paaganatham panchayat in Vadamadurai block near Thoppanasamy hill forest range in Tanil Nadu. Acute water crisis was the prime reason for the incident.

Earlier, the wild animal invaded a hut and attacked two out of eight persons who were sleeping inside. S. Sankan (60) and P. Siva Sankar, native of Kovil Athupatti were injured.

Sankan was admitted to the Dindigul Government Hospital for … Read More

The Great Hornbill (Buceros bicornis) plays a very important role in maintaining optimal ecosystem health. They are frugivores and disperse seeds of many species of trees over large distances. However, these magnificent birds are classified as Near Threatened in the IUCN Red List of Threatened Species due to habitat loss due to deforestation, especially in the Western Ghats, as well as hunting in Northeast India. The Anamalai Hills in the southern Western Ghats still offer pockets where the bird still … Read More 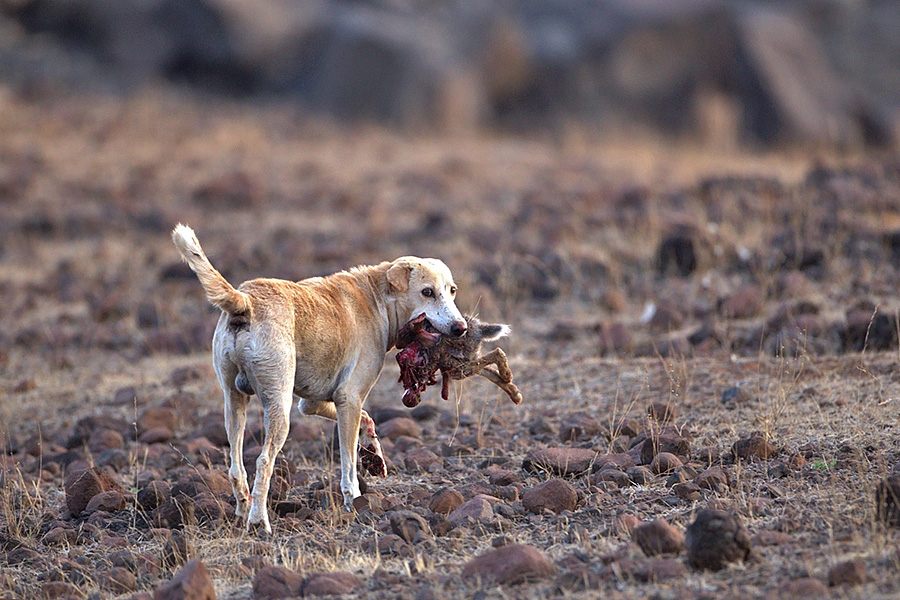