Grasslands are always neglected and, more often than not, deemed to be ‘wastelands’. In reality, grasslands are a treasure trove of biodiversity. And it is in these spaces that one of India’s endangered species thrives – the Indian Wolf (Canis lupus pallipes). The wolf has adapted to living in close proximity to humans, as it gets an advantage of being able to prey on livestock or domestic fowl.

But with this benefit comes a bane, in the form of … Read More

My passion is to highlight the plight of grasslands, and to work towards the conservation of these vast, neglected spaces.

On one of the occasions when my friends and I were in the grasslands near Pune, we were observing a few wolves from a distance. They had killed a Chinkara. However, stray dogs from the nearby settlement showed up in no time, running towards the pack of wolves. I have observed that these wolves are quite shy of human presence … Read More

20 km to the Southeast of Pune lies the Purandar District with its headquarters at Saswad. As we leave the semi-urban environs of Saswad behind, we enter a unique habitat – a mosaic of grasslands interspersed with agricultural lands and human settlements. This human dominated semi-arid savannah landscape harbours unique and threatened faunal diversity.

These areas, historically labelled as ‘wastelands’, have long been ignored by environment policy makers due to the cryptic nature of diversity which they possess. As the … Read More

We were out on our regular Sunday bird-watching trip, 70 kms outside Pune city when we stumbled on this Chousingha or Four-horned Antelope (Tetracerus quadricornis) on 22nd May 2016 at 6:50 AM.

Arriving at a road section where the hills were clothed in scrub jungle, we decided to explore the area on foot. We saw something like a Chinkara (Indian Gazelle) take a couple of jumps and run behind a small hill in a matter of seconds. Sandip was quick … Read More

There are growing conservation concerns about the proposed greenfield International Airport in Purandar taluk, Pune. In addition to local people’s opposition, which led to arrests and subsequent talk of land compensation packages, there is little information on the status of environmental clearance for airport construction. Approved by the Airports Authority of India (AAI), the airport is meant to be fully functional by 2020. Purandar was chosen by AAI after considering other sites in the Chakan-Rajgurunagar area. Various players including top … Read More

A birding group that I was part of sighted the Spot-billed Pelican (Pelecanus philippensis) on 13th February 2016 at 6:35 PM during an evening boat ride at Kumbhargaon, Bhigwan, Maharashtra. The sun had just set, when we sighted a single Spot-billed Pelican circling in the sky. The Pelican circled around 4-5 times before it flew along the river and disappeared in to the horizon.

This is a scene from a hill in Baner, Pune city, Maharashtra. The photo shows a globally threatened bird, the migrant Eurasian Roller (Coracias garrulus) taking off in front of some heavy earthmoving equipment that are destroying its grassland habitat.

Like in the rest of India, grasslands all over Pune district that are not under the control of the forest department are fast disappearing. These grasslands host some threatened fauna. Unfortunately, development will take over and there won’t be habitat … Read More

I took these pictures of a free ranging dog feasting on an Indian Hare inside Mayureshwar Sanctuary on 21st April 2014 around 7.00 A.M. Free ranging dogs in protected areas and grasslands is a big issue across India, including in Maharashtra, and the forest department needs to address this on priority.

Mayureshwar Sanctuary is 72 kms from Pune near a place called Supe. Its grassland ecosystem is home to Indian Gazelle (Chinkara), Indian Fox, Hyena, Wolf and Jackal.

Pune Municipal Corporation has undertaken the work of “restoring” the Pashan Lake in Pune. Lots of digging; new additions to the habitat are being made. I hope the flora & fauna present in and around the lake, benefit after the changes take place. Detailed information of the project is not yet available to me. This image shows the ‘Near Threatened’ Painted Storks with a truck carrying rocks in the background.… Read More 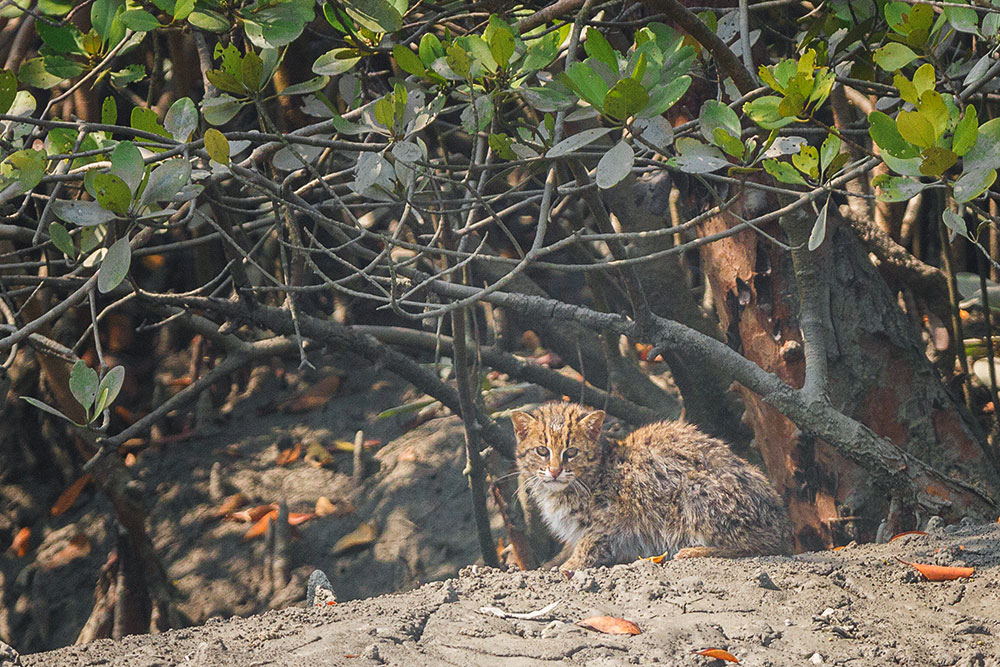 A Fishing Cat Kitten in the Sundarbans Tiger Reserve