The Wolf and the Sheep: Concerns about the Proposed Purandar Airport in Pune 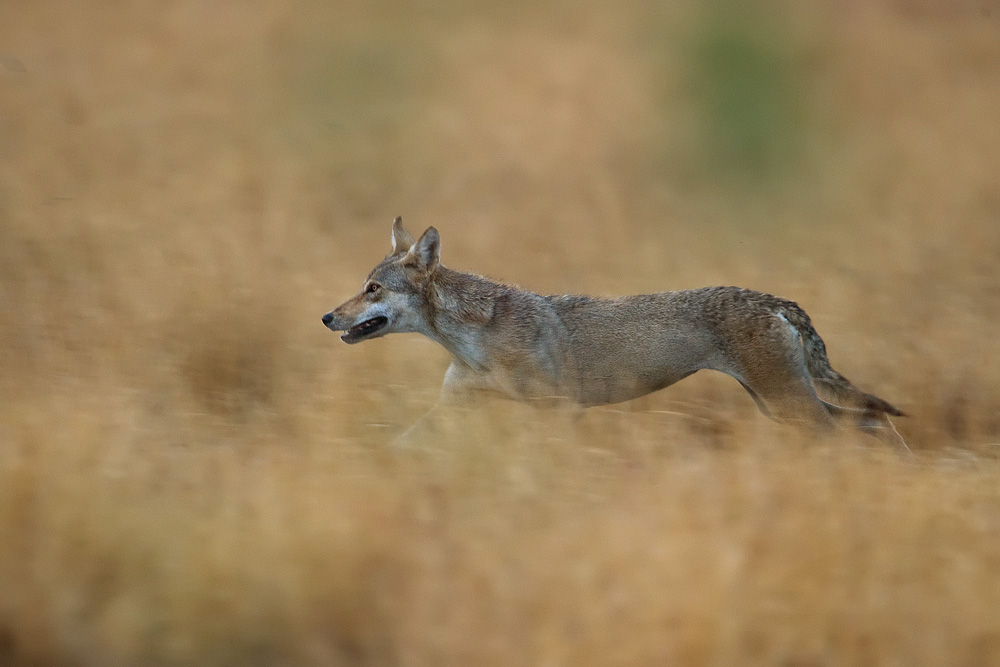 Ramki Sreenivasan
The Indian grey wolf, a Schedule I species, is present in atleast 58% of the 7 districts surveyed in western Maharashtra.
The Purandar landscape with the fort in the backdrop 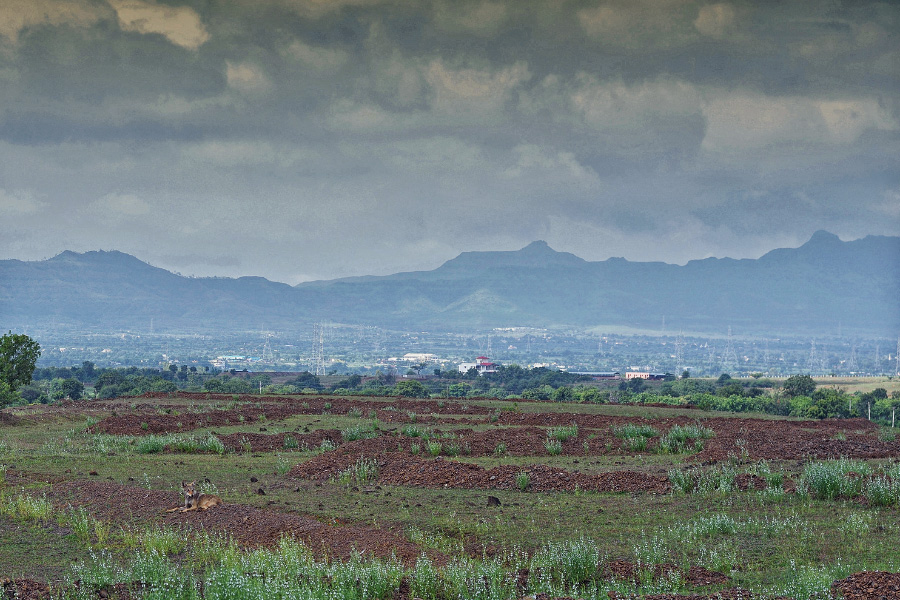 Siddhesh Bramhankar
The landscape is a mosaic of grasslands interspersed with agricultural lands and human settlements.

There are growing conservation concerns about the proposed greenfield International Airport in Purandar taluk, Pune. In addition to local people’s opposition, which led to arrests and subsequent talk of land compensation packages, there is little information on the status of environmental clearance for airport construction. Approved by the Airports Authority of India (AAI), the airport is meant to be fully functional by 2020. Purandar was chosen by AAI after considering other sites in the Chakan-Rajgurunagar area. Various players including top politicians, development authorities and private investors are pushing for the quick setting up of this airport.

A few weeks ago, a statement issued by the Vice Chairman and Managing Director of Maharashtra Airport Development Company Limited (MADC), published in the Times of India, caught our attention. He said that the MADC has “not noticed the presence of a wolf population” in the area, thereby making a buffer zone unnecessary. He also allegedly stated that there was no need for an environmental clearance since there are no ‘rivers’ or ‘trees’ in this area, which is a dry land, devoid of vegetation.

What does the law say?

The Environment Protection Act (EPA) (Amendment, 2006) clearly states that airports fall under ‘Category A’ projects, which means that they are required to undergo a well-scrutinized enquiry of what environmental impacts their construction would have. Even if an airport is not being constructed on ‘forest land’, it still needs an environmental clearance from the Expert Appraisal Committee (EAC) of the Central Government. More importantly, the Environmental Impact Assessment (EIA) report requires a public hearing to be organized by the Pollution Control Board, preferably close to the proposed site, where local people and other stakeholders can voice their concerns. The outcome from this hearing has to be incorporated in the EIA report and only then can it be submitted to the EAC for approval.

From the website of the Ministry of Environment, Forests and Climate Change (MoEFCC), it appears that the MADC has not applied for the clearance yet but will be required to do so under the law. Given that the 7 villages around the proposed site are opposed to the project for various reasons, getting the clearance might not be very easy. Since there is a well-established procedure that is meant to consider ecological as well as sociological repercussions of the construction of the airport, it seems extremely presumptuous for the vice-chairman of the MADC to state that they do not need any clearance, as there are no signs of wolves, trees or rivers.

Ecologically, our concerns are not just limited to the construction of the airport itself, which is likely to encompass an area of 2.4 sq. km along with 2 airstrips of 4 km each. There are talks of constructing a ring road connecting Khed, Chakan and Pimpri-Chinchwad to the airport. Consequently, the entire region between Pune and the proposed airport is likely to undergo extensive urbanisation, completely changing the land use patterns over a vast area. Therefore even a buffer zone just around the airport would prove completely useless, making little or no difference ecologically.

Here are our conclusions based on recent studies conducted in the area.

In 2014, the Pune Wildlife Division along with many research organizations started a survey in the arid areas of Maharashtra to gain a socio-ecological understanding of these regions, which, for the large part, are not Protected Areas (such as National Parks or Wildlife Sanctuaries). We conducted an ecological survey with the help of more than 1500 Forest department ground staff, who provided us with information about wild animal presence from their jurisdictions. Ultimately, we could come up with a map for the 7 districts of Nashik, Ahmednagar, Pune, Solapur, Sangli and Kolhapur, which clearly documented where the three large carnivores – leopard (Panthera pardus), wolf (Canis lupus pallipes) and hyena (Hyaena hyaena) – are found across a landscape that spanned 90,000 sq. km.

Our findings turned out to be quite fascinating because we found wolves, a Schedule I animal, which is entitled to the highest level of protection by law, to be present in almost 58% of the area in these 7 districts, and that too outside protected areas. The map clearly shows that we have confirmed wolf records from Purandar taluk in Pune district in 2014 and 2015. Wolf records from Purandar taluk in Pune district in 2014 and 2015.

The above map is a result of a survey conducted in Maharashtra in 2015 by the Pune Wildlife Division and Wildlife Conservation Society-India (WCS-India). It depicts where the surveyors could detect the presence of wolves within Pune district (denoted by the red boundary outside).

People in the region can further verify the information we have on wolf presence. Local residents, forest staff and wild life enthusiasts from Pune city have not only witnessed wolves on various occasions but have also photographed them in the area.

The proposed airport is also bound to cause certain sociological issues, as its construction will disrupt the lives of pastoral communities in the area, particularly the Dhangars, who use the land in and around Purandar taluk for their livelihood. They depend on both revenue and private lands to graze thousands of sheep, which migrate together annually. Their nomadic livelihood requires them to cover long distances and pass through arid areas, especially during monsoon and post-monsoon seasons. Although their occupation goes back thousands of years, their nomadic way of life implies that they do not have any legal right over the lands they pass through.

Sheep rearing is an extremely lucrative occupation that has unfortunately been undervalued in the dominant social narratives surrounding settled agriculture and urbanization. These communities are susceptible to marginalization when these ‘common lands’ are diverted for infrastructure projects in a short period of time. The Dhangars practice a relatively more sustainable livelihood of grazing resilient breeds of sheep suited to dry areas, and earn substantial benefits from it when compared to water-heavy sugarcane farming in these dry landscapes. Nomadic livelihoods have little value when weighed against large infrastructure projects that obviously attract large capital and generate huge revenue and hence contribute to the GDP of the country. These people are never stakeholders in any of the infrastructure projects that come up in the landscapes they once used and hence have been largely bereft of mainstream opportunities and education.

The idea that arid lands are socio-ecologically less valuable has kept them away from the purview of conservation – be it from the government’s side or from the general public’s. Other than the colonial hand-me-down notion of pastoral lands being non-taxable and hence of lower value, one of the major reasons for this view is also the lower aesthetic appeal of arid scrublands when compared to forested areas. Greener areas, be it even manicured urban lawns, are perceived to be teeming with life when compared to scrub areas, which appear lifeless due to their arid nature. It is not new for large tracts of arid scrub areas, especially in western Maharashtra, to be given to industrial development corporations, solar farms or even dug up to create monoculture plantations – all with the misguided aim of ‘value-addition’ to these barren lands. Such areas may be even more favourable for airport constructions since they are largely open and have fewer obstacles on the ground, a pre-requisite for such projects. But the deeper message remains that there is little value given to these lands to be able to preserve them, not just for the wildlife, which may not always be easily noticed, but also pastoral communities who use it heavily.

Based on ground realities, we would like to flag the following issues: 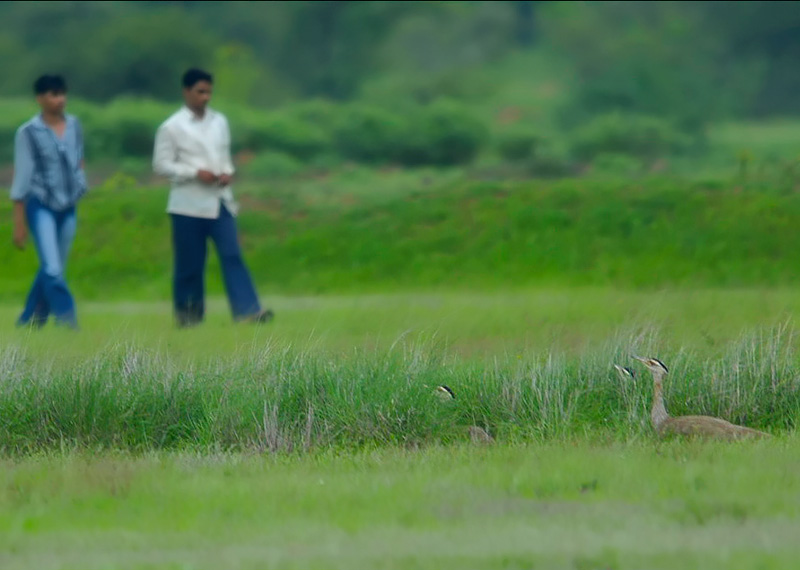