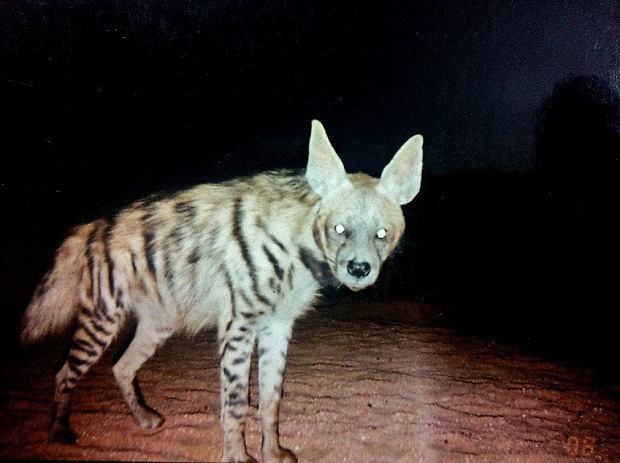 A threatened but poorly understood species, the Striped Hyena (Hyaena hyaena) is thought to occur in arid ecosystems across India. It is found in human-dominated landscapes in Rajasthan, a region with 4.3 percent of land area protected under nature reserves. This large carnivore predominantly scavenges on domestic and wild ungulate carcasses. At present, we lack robust estimates of hyena densities and understanding of factors that influence their persistence and distribution.

Authors Priya Singh, Arjun M. Gopalaswamy, and K. Ullas Karanth estimate hyena densities in Rajasthan’s Kumbhalgarh Wildlife Sanctuary and the Esrana Forest Range. These are the highlights of their study published in Journal of Mammology in 2010 (available for download at the link on the top-right).

The study was conducted from December 2007 to May 2008 covering 307 sq km in Kumbhalgarh and 218 sq km in Esrana, in Rajasthan. Kumbhalgarh, a dry-deciduous forest, receives an annual rainfall of 730 mm, with temperatures varying from 2 – 46°C. Kumbhalgarh has carnivores such as leopard, jungle cat, wolf, jackal and sloth bear and ungulates such as nilgai, chinkara, four-horned antelope and sambar. A forest range, Esrana receives an annual rainfall of 300 mm, with similar temperatures, but has lower vegetation cover. Esrana has similar carnivore species with the addition of desert cat and fox, but among ungulates, only Chinkara, Nilgai and wild pig are present. The altitudinal gradient in Kumbhalgarh is 288-1255m and in Esrana is 160-835m. Both sites differ in land-use regimes, proportion of hilly terrain and feasibility of conducting camera-trap surveys.

Photographic capture-recapture sampling methods were adopted to estimate the densities of the striped hyena in two sites. Using observed encounter rate of hyena tracks, scats, and dens, 52 camera-trap locations in Kumbhalgarh and 48 in Esrana were identified. The design was based on striped-hyena movement and home range data reported from East Africa. To increase photo-capture rates, the trap sites were baited with putrid meat. The study areas were divided into 3 trapping blocks and cameras stationed at each location for 12 successive nights before being moved to the next block. The survey duration of 36 days at each site provided reasonable assurance of demographic closure. Pelage markings on hind and forelimbs were used to individually identify hyenas. Food availability in the form of carcasses, potential refugia, migration trends of livestock herders and livestock densities was recorded in both sites.

There is little scientific data available on the key ecological factors influencing abundance and densities of striped hyenas in India. Understanding what factors influence hyena persistence will be key, particularly since many hyena populations occur outside protected areas in human-dominated landscapes. This study offers a robust methodological approach using photo capture-recaptures to estimate hyena densities and examine environmental factors influencing these densities. The authors find evidence that the existence of potential refugia that are disturbance-free from people and feral dogs, high livestock densities along with inherent social tolerance (non-consumption of meat from livestock carcasses by humans) for hyenas contributes to their persistence in India.


Krithi is Executive Director at the Centre for Wildlife Studies (CWS), Bangalore and Ganashree specializes in Conservation Communications for WCS-India.