Mandookavani — An Acoustic Guide to the Frogs and Toads of the Western Ghats. 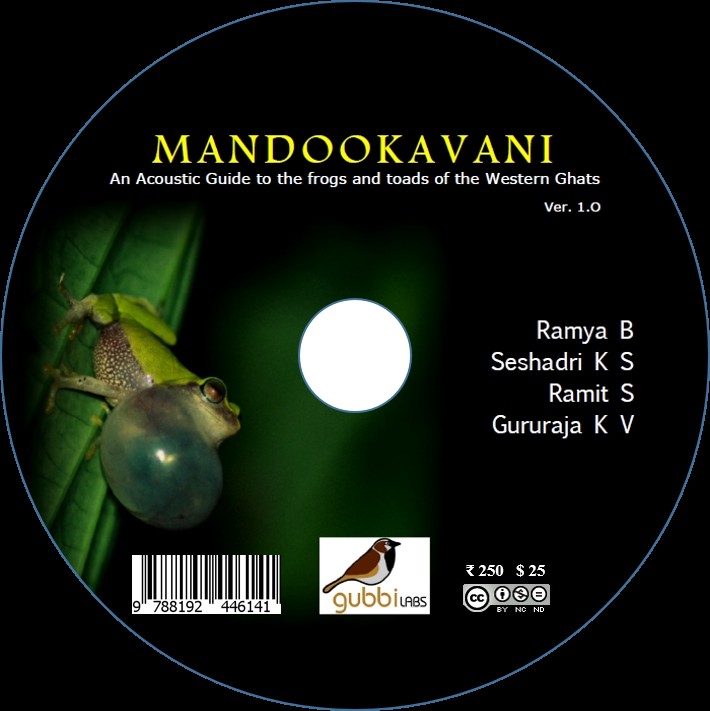 Gubbi Labs
Mandookavani will help not only in identification of anurans but also in understanding their behaviour and habitat requirement.

Western Ghats are home to over 200 species of frogs and toads. It amounts to about 50% of the amphibian diversity in India. Collectively called anurans, each species of frogs and toads have their own unique ‘voice’. These vocalizations, as ‘calls’ or ‘songs’, are a means of communication which male anurans use to woo a mate. They produce these vocalizations by vibrating vocal chords while air is pushed over them. The voice is further amplified in a balloon like vocal sac. The vocalizations are highly evolved and species specific, which enables us to eavesdrop on them and indentify the anurans, just by their calls.

For the first time in India, a group of amphibian researchers have complied a comprehensive digital audio database of about 70 anuran species found in the Western Ghats in a compact disc titled “Mandookavani” (Sanskrit: Mandooka – Frog, Vani – Speech).

The digital database was launched by Dr. Subramanya S (University of Agricultural Sciences) on April 19, 2015 at Jaaga Startup, Bangalore. This database will take the frogs and toads one leap closer to our hearts. It will enable people to identify species and set foundations to draw insights into their unique behavior. Designed to serve as a field guide, each species is named, followed by its vocalization of up to 30 sec duration.

Using acoustics as a guide to identify frogs would also serve as a non-intrusive sampling method for documenting and recording anuran species diversity and conserving them in our backyards. This initiative is an outcome of field effort spanning over a decade. The taxonomy of anurans in India is in flux. Several new species continue to be discovered from the fragile forests of the Western Ghats. This increase in diversity, along with the absence of any systematic documentation until recently had made it almost impossible for an acoustic guide to the anurans of Western Ghats.

Studies on understanding anuran vocalizations are limited in India as compared to birds in the region. This is largely due to the lack of a comprehensive database of calls. Acoustic analysis of calls is done using spectrograms on a computer to analyze the patterns. An acoustic guide like “Mandookavani” is an auditory treat to the ear, from an armchair nature enthusiast to a field biologist.

Anurans use vocalizations to communicate. They communicate with each other and they communicate to us. Anuran vocalizations have had emphasis as early 5th century B C in the ancient Rig Vedic text. All of us are familiar of those evenings that are filled with a myriad of calls as the sky darkens. The anuran symphonic orchestra is synonymous with the onset of monsoon. This is perhaps nature’s way of communicating to us the change of seasons? Further, these anuran symphonies vary with time and with space. Certain species call at specific periods of the day and specific periods of the year. This allows us to gain insights into their intricate lives, understand their response to climate change and work towards mitigating the impacts.

Apart from being pleasing to the ear, this digital database hopes to encourage more people to observe their surroundings, draw them out of the incessant urban din and listen to the voice of frogs and toads and hear to what they have to say before they vanish from our cities, our minds and ultimately our lives.

This database is available as a compact disc and is brought to you by Gubbi Labs LLP and is priced at Rs. 250/-.

It can be ordered online here