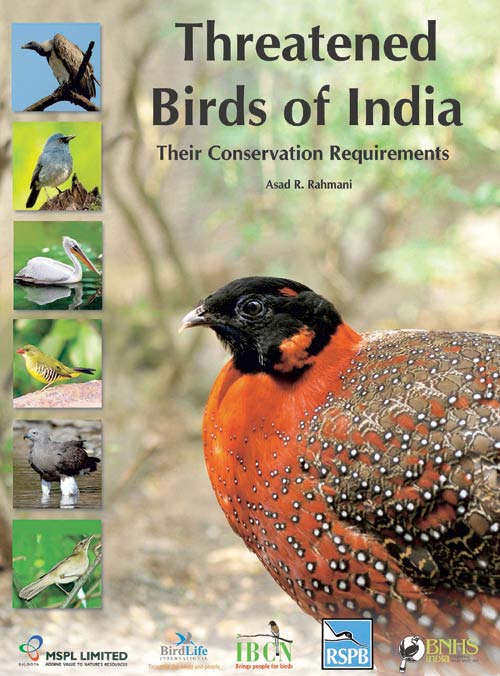 The book under review is a mammoth one. It weighs kilos, has 155 maps, 645 photographs and is 861 pages long. It would take an avid reader well over a year to digest! Only Dr. Asad Rahmani, the Director of the Bombay (not Mumbai!) Natural History Society and their partner Birdlife International could have undertaken such a gigantic project.

Bittu Sahgal, the venerable editor of India’s best-known wildlife magazine Sanctuary Asia and who is at the forefront of India’s conservation movement, recently wrote on the BNHS in his magazine — There is probably no organisation as critically poised to lead India towards an ecological recovery than the Bombay Natural History Society. Why? Because its founding fathers and the visionary legends, who set up and subsequently ran the Society for over 100 years, understood viscerally that honing in on species and then protecting their habitats was a worthwhile mission in life. Today, with climate change having become the number one threat to the survival of a billion souls who inhabit the landmass upon which this book is focused, the ecological restoration of wetlands, grasslands, deserts, coasts, forests, rivers and mountains is probably the only real hope we have of overcoming the dangerous trials of life thrust upon Homo sapiens by development ambitions of an ill-informed coterie of developers who are proving extremely difficult to rein in.

I have known Asad Rahmani for several years and hold him in high regard as a field scientist who has done much to bring the plight of the Great Indian Bustard and other such threatened birds to the notice of an uncaring government. For many decades, the so-called conservation movement in India, including governmental and non-governmental agencies, have concentrated on one ‘star’ animal: the tiger, which appropriates most of the money the reluctant regime parts to ‘save’ its forests and its uncared-for denizens. ‘Who cares what happens to other animals so long as we can get away by showing our efforts to save our national animal?’ appears to be their attitude. In the pecking order of things, birds come way down, perhaps a bit above the humble frogs! A common and often arrogant explanation offered by those NGOs who usurp the lion’s share of the available spoils is ‘If we save the tiger and its habitat we save your birds too!’ My standard reply is that nowhere in India do the Great Indian Bustard (or indeed the Jerdon’s Courser) and the tiger share a habitat. It is indeed true that that the tiger is down to about 1,200 and declining, but the iconic bustard and the recently re-discovered courser are down to 150. As Rahmani states in the book, “While the noble efforts to save our national animal through Project Tiger should be better funded, better staffed, and expanded by including many rich tiger-inhabited areas, we need to look beyond Project Tiger if we want to save all wildlife and all wild areas.”

This general indifference to our avian wealth is what gives the Threatened birds of India the importance it deserves. Rahmani and his team of several hundred contributors and photographers have put together the available extant data of 158 birds under their current status of Critically Endangered, Endangered, Vulnerable, Near Threatened and Data Deficient. Each bird that falls in any of the above categories has its field character, distribution, ecology, threats, recommendations and references described in great detail. A distribution map and several photographs accompany the erudite text.

The significance of the contents may be lost on our Prime Minister who, by that very virtue, heads the ineffectual and self-righteous National Board for Wildlife. Does he or his subordinates comprehend that the sudden appearance of the Black-shouldered Kite in Kerala shows that large tracts of forest have been cleared, and this allows this raptor to scan large open tracts for its prey? Do they ever acknowledge that the disappearance of the Indian Skimmer means that the quality of the water has deteriorated? And do they really care?

About a quarter of the India’s threatened birds are endemic i.e. confined within our borders. Three birds fall under Critically Endangered status. Of these the Forest Owlet was ‘re-discovered’ in in 1997 not having been seen since 1884 and the Jerdon’s Courser too was re-discovered in 1986, since its last record in 1848. The third bird, the Himalayan Quail has not been seen since 1876.

Other non-endemic birds include the Pink-headed Duck that was last seen in India by CM Inglis in 1936 in Darbhanga. It is believed that the then Maharaja of this erstwhile royal state in Bihar, whose hunters trapped thousands of waterfowl for the table, unwittingly ate the last surviving member of the species! India’s largest bird, the Great Indian Bustard is now down to around 150 birds. Loss of habitat and hunting, senso lato, are cited as prime reasons for its decline, but the truth is that the rulers of this country have taken no ostensible steps for its protection. The day is not too far when the last member of this tribe will disappear unsung. The fate of the Bengal Florican and its congener the Lesser Florican too is truly worrisome.

This lack of protection extends to other birds as well. For instance the Jerdon’s Courser is restricted to a small area in the Cuddapah district of Andhra Pradesh. Several villages have recently been relocated in to this area and their very presence leads to the degradation of this fragile habitat. The Forest Owlet is found in small, forested locations in Maharashtra and Madhya Pradesh. Encroachment by the local populace and the timber mafia means that this diminutive member of the owl family may too be doomed.

The alarm bells about the plight of the vultures started ringing in the mid-1990s when the vultures literally ‘disappeared’. This alarming decline of about 99 percent of the gyps family was attributed to several causes, some more plausible than the other. Scientific tests were conducted on dead vultures and the popular verdict gravitated towards a veterinary drug called ‘diclofenac’. This drug was being used as an anti-inflammatory medicine administered to domestic cattle. Vultures, supposedly, have a digestive system strong enough to even digest disease-causing pathogens found in rotting meat of dead animals, but they do not have a critical enzyme that breaks down diclofenac and so die of renal failure after eating carcasses of cattle administered with the drug. “It’s lethal for vultures if they eat an animal within 72 hours of it being given diclofenac,” says Dr. Vibhu Prakash, the principal researcher of the crisis. This offending drug was officially banned by the concerned authorities but is still easily available. Mercifully, it seems that the numbers of vultures are slowly increasing and so hope still reigns.

The trapping of birds has for long been a major problem in India. Munias, weavers, hill mynahs and parakeets are particularly sought after as cage birds. Many religious devotees take solace in releasing birds, in the mistaken belief that they are performing a ‘good deed’ by buying and setting them free. But in reality all they are doing is fuelling the trade. Most of these trapped birds are not naturally skilled to look after themselves, and when released find they are unable to fend for themselves and so die soon after. Meanwhile, the now richer bird-seller goes and captures some more to help assuage the conscience of the wannabe redeemer. Abrar Ahmed, who has contributed a substantial article on this problem writes “threatened birds are specifically trapped, traded and highly-valued”. Species that fall in this category include the Swamp Francolin, Green Avadavat, Finn’s Weaver, Sarus Crane, Black-necked Stork, Lesser Flamingo, and the Nicobar, Derby’s, and Long-tailed Parakeets. All species of hornbills are highly prized and owls are in great demand for use in obscurantist tantric rituals. Numerous tribes (the Bahaleyiyas in North India, The Mirshikaris in the Northeast and the Narrikolvas, Hakkipukki and Harries in the peninsula) have for several centuries been traditional bird-trappers and unless we provide an alternate source of income for them, this scourge is likely to remain.

Hunting, as a pastime by rich feudals and the then British rulers has certainly contributed to the decline of the big cats and other mammals in India. Bird hunting though was usually confined to ducks, pheasants, partridges, quails, Junglefowl and snipe. There were certain rules that the ‘sportsmen’ followed: always shoot on the wing and invariably recover injured birds. This sport has now almost disappeared due to all hunting being banned, the difficulty in procuring gun licenses and the prohibitive expense of ammunition.

But hunting for food continues unabated, particularly in Northeastern India, where the laws of the land seldom apply. Arunachal Pradesh, Nagaland, Manipur and Mizoram are particular culprits. I recently made several visits to these regions and was shocked at the quantum of live, injured and dead birds and animals sold openly and fearlessly in the food markets. The only recent record from India of the almost mythical Blue Pitta has been of a dead bird photographed in the Dimapur bazaar. The annual massacre of the migratory Amur Falcon has recently been highlighted through the social media by the Bengaluru based NGO Conservation India. The video on their website is certainly not for the faint-hearted. It is now conservatively estimated that over 15,000 Amurs are killed per day during the two-to-three-week period, in October, that that the hapless bird migrates through Nagaland.

India’s obsession with dams, both big and small, the endless felling of trees and draining of wetlands to provide for a burgeoning population, the killing fields of the Northeast, the government’s evident disinterest in matters avian do not augur well for the future of our birds, threatened or otherwise. This book therefore is timely, if distressing, reminder of their current status and their dismal future.

My only quarrel is why did the august BNHS choose to print this book rather than upload the data, to make it easily accessible to a larger audience. Hundreds of trees must have gone into its production of this tome, which, at Rs 3,000, only a handful can afford. Perhaps it is still not too late to do so. Many ornithologists would certainly benefit and the dire message of the book will be disseminated to a new generation of birdwatchers. 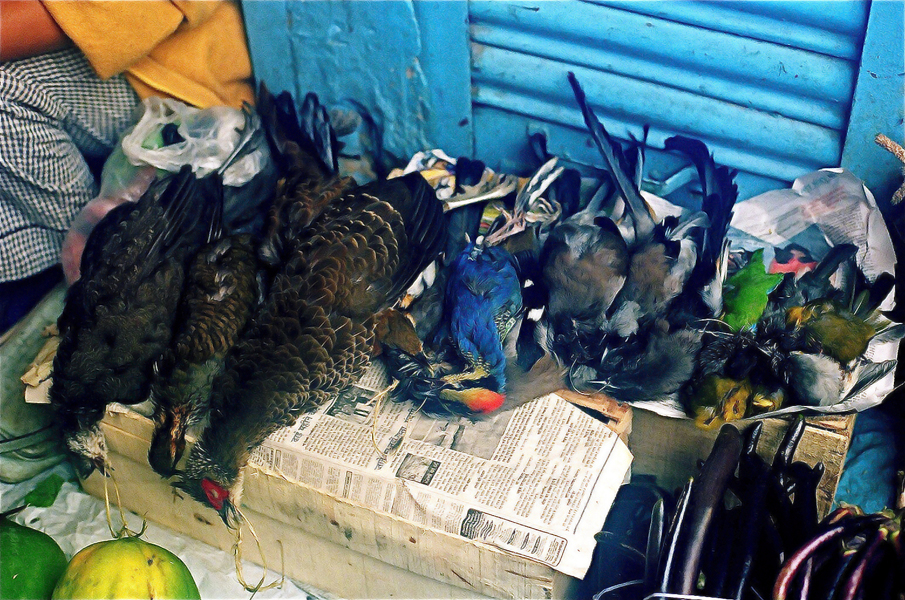