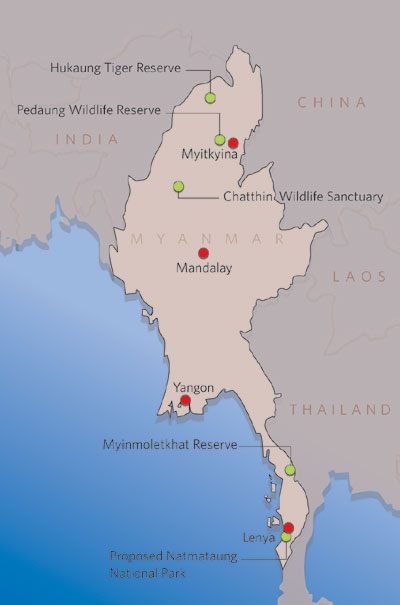 Around 20,000 square kilometres has been designated for the remote northern reserve.

A region the size of the U.S. state of Vermont has been earmarked by Myanmar as a sanctuary for the tiger, one of the most endangered animals on the planet. But can the poaching of the big cats and their prey be stopped?

The entire Hukaung Valley is to be declared a Protected Tiger Area, the government of Myanmar announced, according to two conservation organizations which do extensive work in the country, Panthera and Wildlife Conservation Society.

“The declaration officially protects an area the size of Vermont and marks a major step forward in saving one of the most endangered species on the planet–the tiger–which numbers less than 3,000 in the wild,” Panthera and WCS said in a news statement.

Isolated in Myanmar, the Hukaung Valley Tiger Reserve stretches 8,452 square miles in the northernmost part of the country, the charities added. “The Valley is known as a tiger reserve with the potential of holding several hundred tigers, but illegal hunting both of tigers and their prey has caused a steep decline in their numbers with some estimates showing as few as 50 of the big cats in the region.”

In 2004 the Myanmar government set aside 2,500 square miles of the Hukaung Valley as an inviolate wildlife sanctuary, based off of the first ever biological expedition of the area in 1999 led by Alan Rabinowitz , currently CEO of the wild cat conservation group Panthera, and staff from the Forest Department and the Wildlife Conservation Society’s Myanmar Program.

“The designation extends the protected area an additional 4,248 square miles, and is the result of many years of hard work engaging local ethnic groups, recent settlers, and local businesses to agree to their townships becoming multi-use areas, in a way that serves their needs and that of wildlife in the region.

“The resulting wildlife sanctuary stretches 6, 748 miles and makes up the core of the Hukaung Valley Tiger Reserve,” WCS and Panthera said.

“Highly unprecedented, the designation was enacted after Myanmar Prime Minister Thein Sein gathered 17 other Cabinet Ministers to fly to Hukaung Valley earlier this year to assess its conservation needs and convey the importance of the region for tigers, and other species.” The designation protects some of the last expanses of closed forest in the Indo-Pacific region and is one of the most important ecosystems, including wetlands, for the long-term conservation of large mammals such as tigers, clouded leopards, and Asian elephants.

Some 370 bird species, including the Critically Endangered Rufous-necked hornbill, have been found in the region, and of the current global estimate of 13,500 plant species, approximately 7,000 are found in the Hukaung Valley and nowhere else on the planet, WCS and Panthera said. “I have dreamt of this day for many years,” Rabinowitz said. “The strides we made in 2004 were groundbreaking, but protecting this entire valley to ensure tigers are able to live and roam freely is a game changer. This reserve is one of the most important stretches of tiger habitat in the world, and I am thrilled that the people and government of Myanmar understand the importance of preserving it.”

“Myanmar now offers one of the best hopes for saving tigers in Southeast Asia,” said Colin Poole, director for Wildlife Conservation Society’s Asia Programs. “The newly expanded protected area in the Hukaung Valley will be a cornerstone of tiger conservation throughout this iconic big cat’s range.”

“As recently as one hundred years ago, up to 100,000 tigers roamed the forests and grasslands of Asia, but today less than 3,000 tigers survive in the wild. In the past few years alone, some tiger populations have been completely eliminated, even from what were considered to be well-protected areas,” WCS and Panthera said.

“The world’s remaining tiger populations exist in small, isolated fragments that are constantly threatened by the illegal hunting of tigers and their prey.

“The Hukaung Valley reserve joins a number of other areas of existing and potential tiger habitat that exist in many parts of Asia. Scientists and conservationists believe that tigers can make a comeback if the most critical threats to their existence–poaching of the cats themselves and their prey–are addressed effectively and immediately.”

Tiger range state leaders, donor nations and multilateral institutions will come together to celebrate the culmination of the Global Tiger Initiative at a summit in St. Petersburg, Russia this fall to make firm commitments to doubling the number of tigers by 2022.