by Varun R. Goswami
The tigress that was shot dead in Medziphema 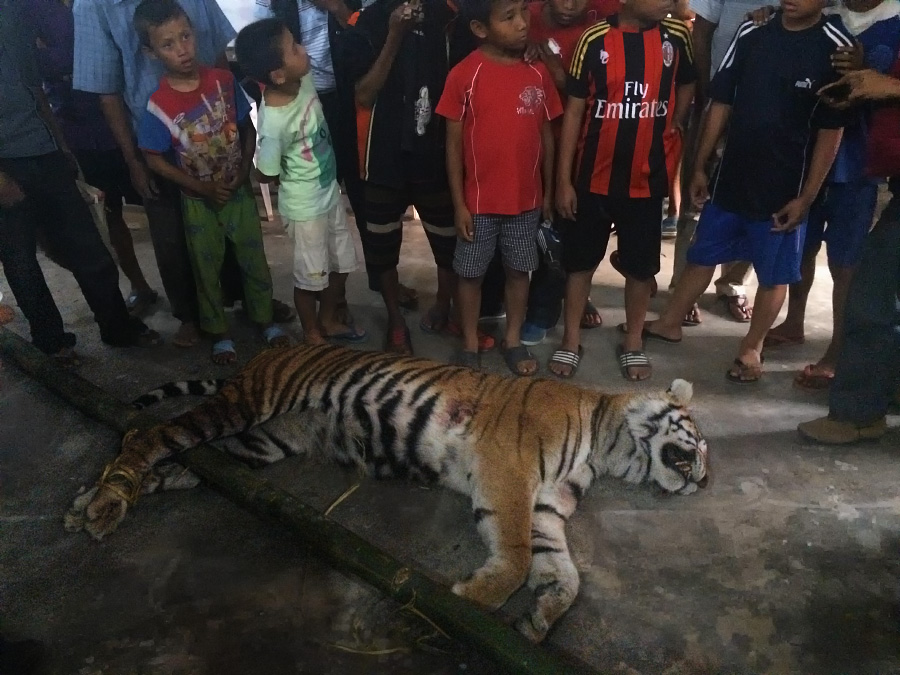 Nagaland threw up a surprise for wildlife conservationists, particularly those involved with tigers in the country. A dispersing tiger, which landed in Medziphema, a small village near Dimapur on the main highway to Kohima, was tragically shot dead by panicked villagers on February 29, 2016. Tigers have not been officially recorded from the area in over a decade.

The incident unfolded after the tiger killed two pigs and a cow the previous night forcing the villagers to launch a drive to “chase away the animal”. Armed with guns and spears, a mob went after the tiger which was taking shelter in a forest at the edge of the village. The tiger, trapped after the villagers surrounded the animal, tried to escape and attacked and wounded a man in the process. Villagers opened fire immediately killing it on the spot.

Initially, the villagers refused to part with the carcass claiming the trophy to be a symbol of bravery. It took several hours for the authorities to convince the villagers to finally hand over the carcass of the endangered species. Residents of Medziphema, it appears, were not fully aware of how threatened or rare tigers are as animals. Nor did they fully consider the gravity of their action.

Two days later, residents of the same village received news of another tiger in their area. Three youngsters walking inside a nearby forest reported catching a fleeting glimpse of a large, cat-like animal that they had surprised while it was feeding on a wild pig. As the news spread, Medziphema village again witnessed tense moments. The locals, now more aware of tiger conservation issues, immediately informed the authorities of their concern. The Nagaland Forest Department responded in real time, but further action could only be taken if there existed concrete evidence of a second tiger. Wildlife Conservation Society India Program (WCS-India), facilitated by Nagaland Wildlife and Biodiversity Conservation Trust (NWBCT), stepped in to provide technical assistance at this stage, and set up camera-traps near the kill-site and around the village along with the forest department. After seven days of camera trapping with 17 units, there was no evidence of a tiger.

“It is unlikely that there is a resident population of tigers in the area. There is habitat for tigers, but little prey”, said Dr. Varun Goswami, scientist at WCS-India, who led the effort. “Tigers, however, can disperse into Nagaland from multiple directions – the forests of Karbi Anglong towards the northwest, or perhaps, Myanmar to the southeast”, he added. In fact, on closer interaction, residents of Medziphema revealed that tigers do occasionally pass through the area.

“What is promising is that this time the villagers, the forest department, and NGOs worked together and acted immediately. This gave the villagers confidence that the next time also, they will receive similar help”, said Ms. Haralu, who is from Nagaland. “This will go a long way in ensuring that the next time a tiger disperses through our state, it will be able to successfully move through”.

Historically, animals like tigers and elephants would freely move between Northeast India and Myanmar. Today, this connectivity is broken for the most part. WCS-India, NWBCT and WCS-Myanmar have collaboratively initiated a long-term vision: reconnecting tiger and other wildlife populations in the Indo–Myanmar region.

The project, supported by the Integrated Tiger Habitat Conservation Program (sponsored by the International Union for Conservation of Nature and KfW), is a science-based conservation effort spearheaded by WCS-India and WCS Myanmar to increase wildlife connectivity between the forests of Northeast India and northwestern Myanmar. The conservation of umbrella species like the tiger will safeguard the health of entire ecosystems and the people who live within them. In the long run, such connectivity is critical for tiger and other wildlife populations in protected areas in both India and Myanmar.

“Such large-scale wildlife movement is impossible without the support of people living in this region. Our focus is to help animals move while safeguarding the lives and livelihoods of people. Community-based conservation is the foundation of our project”, said Dr. Varun Goswami, senior scientist at WCS-India, who is leading these efforts. “There is little knowledge on where the animals are, and where they move”, added Dr. Goswami.

To obtain this information, WCS-India will undertake large-scale surveys to assess wildlife distribution.