Closing Highways to Night Traffic — A Case Study From Karnataka

Sanjay Gubbi
A tiger killed by a speeding vehicle in Bandipur 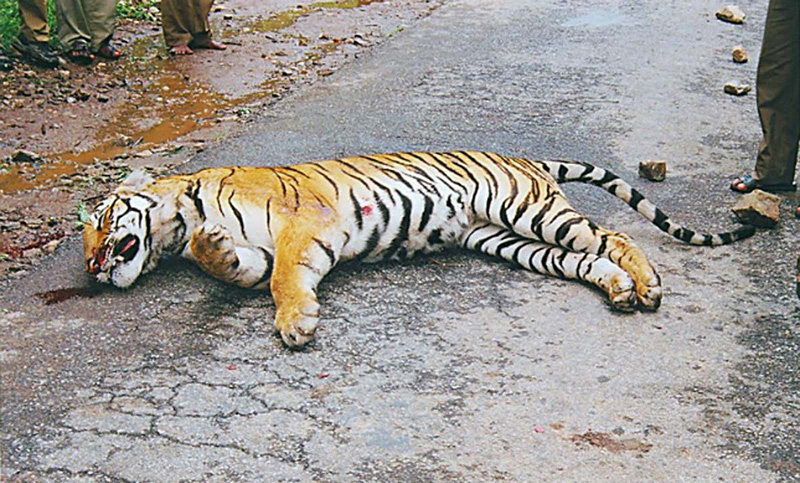 D. Yatish Kumar
The most shocking, serious and visible impact of roads through protected areas is road kill deaths.

Background: Impacts of roads on wildlife

India is in a phase of rapid infrastructural growth where improving the surface transport system is seen as a key element for economic development. Demand for better roads is also being fuelled by the overall increase in vehicle numbers, currently growing at 10% per annum. Several international donor and lending agencies are providing the financial impetus for the expansion of India’s road network. Many of these roads pass through India’s Protected Areas (PAs), posing a serious conservation threat.

In Karnataka, 9 out of 15 National Highways and 28 out of 151 State Highways pass through important wildlife habitats in the Western Ghats.

The scientifically documented negative ecological impacts of roads through PAs are many, and include:

The most serious and visible impact of roads through PAs is road kill deaths. For some wildlife species, poor eyesight, slow movement and over speeding of vehicles proves a fatal combination. These unnatural mortalities can have deleterious effects on the population of a species, particularly through loss of breeding individuals. In the United States, vehicular collision is one of the primary causes of death to endangered species like the Florida Panther.

Some of the impacts of roads through PAs can be somewhat mitigated if speed calming and other measures are scientifically implemented. Structures that help wildlife cross safely, such as underpasses, can help reduce road kills. However, since a large proportion of the fatalities happen at night, the best mitigation measure is closure of roads through PAs for nighttime traffic.

Karnataka has some of the best PAs in the country, especially for tiger and elephant. Nagarahole and Bandipur Tiger Reserves hold some of the highest densities of these endangered animals and provide refuge to “source” populations. Anshi-Dandeli Tiger Reserve, Kudremukh National Park, Someshwara and Mookambika Wildlife Sanctuaries and other reserved forests in the Western Ghats act as important “sinks” or dispersal corridors for these species. However, new roads, and expansion or upgrading of existing roads to high-speed highways, have been proposed in some of these critical wildlife habitats.

Although important for economic development, excessive road expansion into wildlife habitats, and roads that are poorly planned and do not integrate wildlife safety into their planning, will cause irreparable harm to wildlife. Integrated conservation planning that provides long-term solutions for reducing the impacts of linear intrusions like roads on wildlife need to be urgently developed for the country.

Two major National Highways pass through Bandipur Tiger Reserve – NH 67 (Gundlupet-Ooty Road) and NH 212 (Gundlupet-Sultan Batthery Road) – and both experience heavy traffic. The traffic on NH 67 is largely tourists plying from Karnataka to the hill resort of Ooty. While on NH 212 there is heavy passenger and truck traffic plying to northern Kerala.

Speeding vehicles used to kill many animals annually, mostly chital, and nocturnal animals such as civets, black-naped hare, and mouse deer, as well as countless birds and reptiles. There were also instances of tiger, elephant calf, sambar, rusty-spotted cat and many other animals being killed on the road.

Based on the successful night closure of the Mysore-Mananthavadi Road at Nagarahole, the forest officers at Bandipur requested that a similar night closure should be carried out on the two highways passing through Bandipur.

Based on the recommendation of the Deputy Conservator of Forests, Bandipur, the Deputy Commissioner of Chamrajnagar issued a closure order on 03-06-2009 under the Motor Vehicles Act to close the two highways to nighttime traffic from 9.00 pm to 6.00 am.

However due to several compulsions the closure order was withdrawn a week later, on 10-06-2009.

Aggrieved by this, a lawyer from Bangalore approached the High Court. We also decided to approach the court. One of our volunteers, B.V.Anup, agreed to sign the petition. We collected extensive data to counter all the arguments given by the parties opposing the night closure. This included data on vehicular movement, availability of hospitals in north Kerala (as the opposing parties had argued that people from Kerala come to hospitals in Mysore at night), movement of fruits and vegetables from Karnataka to Kerala (the opposing parties had argued that this would stop the vegetable and fruit trade from Karnataka to Kerala), Sabarimala pilgrim traffic, availability of alternate roads, etc. We also presented examples of impacts of highways on wildlife, night closures in other protected areas, legal provisions that stipulated traffic restriction within PAs, etc. Ms. Anu Chengappa a lawyer keenly interested in wildlife conservation represented B.V.Anup.

Various parties opposing the night closure of the two highways filed a total of 9 Writ Petitions. Lawyers from Kerala vehemently opposed any traffic restrictions on the two highways. The Tamilnadu Government however, did not show much opposition, though one lawyer represented the state.

Meanwhile we discovered that one of the petitioners who had filed a case opposing the reopening of the highways was not arguing the case in the court and was absent during several hearings. We made sure we attended every hearing to track the case in an effective manner.

We also constantly worked with the media to project all the ill effects of these highways on wildlife.

Meanwhile I worked with senior Government officials and convinced them that the state Government should support the closure of the highways at nighttime. Thanks to the endorsement and support of Ms. Meera Saxena (Principal Secretary, Forests, Ecology and Environment), Mr. B.K.Singh (Chief Wildlife Warden), Mr. B.J.Hosmath (Field Director Project Tiger) and Dr. Hanumanthappa (Deputy Conservator of Forests, Bandipur), the state Government filed an affidavit endorsing night closure, based on ecological and biological grounds.

I also briefed Mr. Ravindra G.Kolle, Government Counsel in the case about the importance of the closure. This meeting turned out to be very crucial as Mr. Kolle showed a keen interest in the matter and extended his full support for the cause. He convinced the Advocate General of Karnataka about the validity of the case and requested the judges for an opportunity to explain the nuances of the issue. In a rare gesture the court accepted this request, and the Government was asked to make a power point presentation.

As a Member of the State Wildlife Board, I was given the responsibility of preparing the presentation. Once the presentation was ready, senior forest officials and the Principal Secretary, Forests, Ecology and Environment, gave their approval.

On 18th February 2010, Mr.B.J.Hosmat (FDPT) and I made a presentation to Justices Gopal Gowda and B.S.Patil. All counsel with interests in the case, as well as the media, were allowed to attend the presentation. We showcased several issues including the importance of Bandipur for tiger conservation, alternative roads available for night traffic, the real status of fruit and vegetable trade movement on the highways, etc.

My colleague Poornesh had made extensive arrangements for the presentation to ensure that there were no glitches. Two LCD projectors, screens, battery backup, and other equipment were put in place to ensure a smooth screening. My colleague, Raghuram, ensured that all the required documents were obtained through RTI; he also collected all the facts to prove that the fruit and vegetable trade to Kerala would not be affected as all trade would be completed by 6-7.00 pm.

The Powerpoint presentation made a huge impact – not only on the judges but, apparently, on the opposition lawyers as well. After the presentation three lawyers fighting against the night closure told me that they now really understood the importance of the issue, and went on to say that wildlife should win this case. The judges asked several questions after our presentation. The media carried several positive stories about the presentation.

Subsequently, many hearings took place in the High Court, where our counsel, Ms. Anu Chengappa put forth several important arguments, which were supported by the Karnataka Government Counsel, Mr.Kolle. At one of the hearings Ms. Chengappa was allowed to make submissions for nearly an hour.

Finally on 9th March 2010, the High Court of Karnataka ordered the withdrawal of 10-06-2009 order of the Deputy Commissioner (through which the highways had been reopened to nighttime traffic) and held that it was extremely important to protect wildlife.

Later the Government of Kerala went to the Supreme Court against the Karnataka High Court order. In a surprising turn of events the PCCF (Wildlife) Karnataka received an interim order from the Supreme Court to “explore possibility to work out the modalities of transporting goods vehicles by means of some convoy system during the night time”. The Government of Karnataka was neither heard in this matter nor was our petitioner, B.V.Anup, made a respondent in the case in the Supreme Court. Although the Karnataka High Court order for night closure was in response to B.V.Anup’s petition, he was excluded from the case for reasons unknown.

In response we moved an impleading application before the Supreme Court, which was later accepted.

Subsequently, the transport minister of Kerala came with another delegation and met the Karnataka Chief Minister (who also held the Forest Portfolio) who gave them a similar reply,

The State of Karnataka has filed its response to the petition filed by the Kerala Government in the Supreme Court and the case is currently pending.

Meanwhile the wildlife of Bandipur continues to enjoy peaceful nights, as both highways remain closed for night traffic.

What these case studies prove is that where there is a will, there is a way. No one dreamt that the extremely busy highways through Bandipur could be closed for night traffic. However, thanks to civil society representatives, forest officials, District Commissioners and other government representatives presenting a united front, the impossible could be achieved. Since the cases were argued in court with irrefutable data and photographic evidence as well as on grounds of compassion, the Hon’ble judges viewed them favourably. The key government functionary in both cases was the District Commissioner of the concerned area, who played a major role.