Prerna Singh Bindra
The author with the 'rescued' parakeets 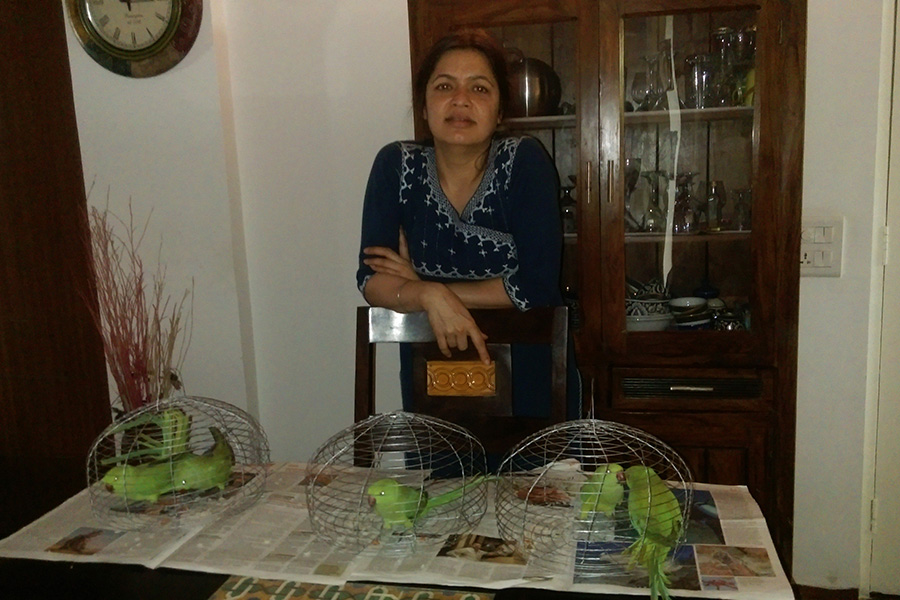 She was like any other hawker, selling—persuasively, aggressively—extolling the qualities of her wares. Only she wasn’t ‘just another hawker’. Her wares were illegal; she was hawking parakeets, the trapping and trade of which is prohibited under the Wildlife (Protection) Act, 1972.

I spotted the woman in Vasant Vihar (near Priya Cinema), Delhi, on my way to visit a very sick friend, and almost turned a blind eye. You know how it is, when the task at hand is overwhelming or decidedly unpleasant, but still, you can’t pass by. Your conscience pricks, and nags. Especially as the friend (and mentor) I was on my way to meet, was on the forefront of the battle against illegal wildlife trade, and had taken on notorious wildlife criminals like Sansar Chand, who, in his lifetime has traded in the skins and bones of nearly a thousand tigers, leopards, etc.

How would I look him in the eye?

How could I simply walk away?

I stopped, and started casually chatting with the woman. Initially, she responded, and said that she had bought the parakeets from Meerut. Meerut is a major hub for illegal wildlife trade, especially of birds and other species like mongoose, civets, spiny-tailed lizards, etc. Mongoose are killed for their hair which is used in paint brushes, spiny-tailed lizards are boiled—alive—in oil, a witches’ brew that apparently works miracles on impotent penis’—and souls. She said that many people across the capital got their birds from Meerut and were hawking them across Delhi, Noida and Ghaziabad.

I remember a colleague who had cracked down on the illegal trade in Meerut telling me that often pet shops served as a front—literally—to hawk the illegal stuff. Walk in the back alleys and the pokey little holes (shops) are lined with birds of all hue, crammed into cages.

Meanwhile, back in Vasant Vihar, a car had stopped, to ’buy’ the parakeets. I explained to the lady (who wanted to buy the caged bird to amuse her kids) that it was illegal, and it was demand from people like her that drove the trade. After all, if there was no market for parakeets, no one would sell them. She didn’t get it. She had the money, didn’t she? So who the hell was I to stop her from buying the parrot for her children? Aah, the children. How long would they be enamored by the caged parrot, I asked? Would it not be a fancy new toy, whose charms would enthrall till the next Lego or Barbie or whatever it is that kids play with these days. Why not, I said, instead take them exploring to Sultanpur, a sanctuary for birds, and watch parakeets fly, free, in the blue skies?

I could see I was getting nowhere.

So, I told her that buying birds is illegal, as much as selling is, and she (as well as the seller) could face three years imprisonment or a fine of INR 25,000. And did she know that for every ‘parrot’, at least 10 to 20 die, during trapping? That their orphaned chicks starve? And that during transit, birds are crammed in cages, baskets or stuffed in gunny bags? Most don’t reach their destination.

The woman now wore a glazed look, but zoomed off nonetheless, after muttering a few choice curses. Others had gathered to watch the fun, one ‘gentleman’ extolled me to consider the woman’s poverty, and not to rob her livelihood. He also offered her (but not the parakeets) a lift. I could, he sneered, join in as well. I knew I was getting into a nasty situation.

Pinky, the seller, was getting angry too, seeing I had taken her custom. She had meanwhile got one or two of her accomplices, and they started abusing me. Another man tried to man-handle me. I resisted, stood my ground, and firmly told her to get into my car, and accompany me to the police station where I would book her under the Wildlife Protection Act. Alternately, she could surrender the parakeets to me, and scoot. I would ensure that they were rehabilitated through the proper channels. I warned her that if she, or anyone else, was spotted again, it would be jail for her. Seeing that the situation was getting out of hand—and I was alone—I grabbed the Alexandrine Parakeets. And after a brief stopover at home for some rest, I took them to Wildlife SOS, who are licensed to rescue wildlife, and have a rescue and rehabilitation centre.

It is best advised in such a situation to ask for police help. Or at least have one or two other people with you. Be in a group. I was alone—and there was only so much I could handle, I reacted on impulse, plunging into the situation—but for what it’s worth, I am glad I did.

Also, keep a copy of the Wildlife (Protection) Act, 1972 with you – helps to convince the police.