Review of the Tiger Task Force report, 2005 — Joining the Dots but Losing the Cats?

Dr. Ullas K Karanth | Cat News
A board in Sariska 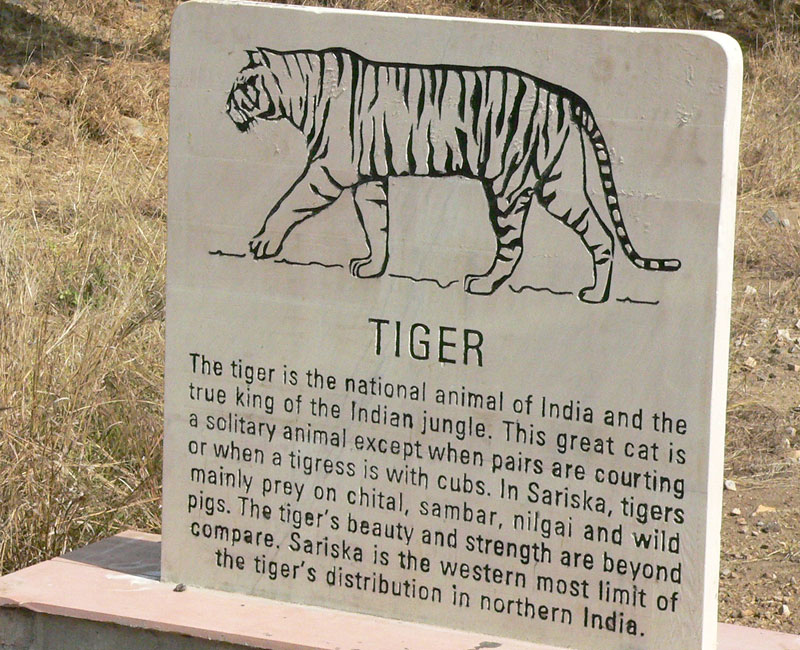 Prerna Bindra
The Prime Minister of India appointed the Tiger Task Force (TTF) after a huge public outcry over the Sariska catastrophe.

After the Sariska catastrophe, and the resultant public outcry, the Prime Minister appointed a Tiger Task Force (TTF) to review the status of the species. The TTF submitted a 206-page report titled Joining the Dots in August 2005. Dr Ullas Karanth reviews the TTF report.

The TTF recognizes that viable breeding populations of wild tigers need sufficient habitats free of incompatible human uses. It projects an area of 37,000 sq km, within boundaries of current tiger reserves as future ‘inviolate’ space for tigers, thus setting a ceiling of 300–3700 individuals as the potential maximum population size for breeding tiger populations. Some tiger reserves are merely paper sanctuaries: several are virtually under the control of guerilla groups; many are deteriorating under pressures of hunting and habitat overuse. Most have densely packed human settlements that cover substantial proportions of their area. Given these facts, restricting the scope of potential inviolate tiger habitats to present tiger reserves is not scientifically defensible.

The report rightly points out that the required scale of investments is far greater than earmarked in current government plans for the wildlife sector. It has also identified some potential sources of funding that can be mobilized to pay for such tiger conservation efforts: charging farmers, businesses and urban citizens for the watershed services provided by the forest reserves and by recovering costs from forestry, tourism, mining and other resource-based industries. There is one more important potential source of untapped funds. If settlements for relocation are carefully chosen based on sound ecological criteria, the amount of money saved in other sectors of public expenditure (on provision of rural roads, power lines, communication, health care, education etc), is likely to be far more than the actual cost of relocations. Another point: existing tiger reserves have been used as units for generating estimates; many of these tiger reserves were created over time in an ad hoc manner and hence the estimates may be flawed.

The issue of human–tiger coexistence

The report poses a pertinent question—if we agree that ‘sufficient’ tiger habitat is to be kept inviolate through adequate investments in voluntary relocation of villages, what do we then do with human settlements in other tiger habitats where such relocation is not a practical option in the foreseeable future? The report suggests that in such tiger habitats existing wildlife laws should be relaxed to allow exploitation of forest and other multiple-uses.
Diluting India’s strict – albeit loosely implemented – protected area laws would be most unwise. Given the tremendous extractive pressures from local communities, developmental agencies and various commercial interests, such dilution will indeed further promote continued fragmentation and destruction of even remaining critical tiger habitats. We must scientifically identify all high priority areas of sufficient size where tiger habitat should remain inviolate. This process must cover all tiger habitats in India, including ‘reserved forests’ and ‘community-controlled forests’. At the same time, another scientific process must be initiated to earmark areas within the present network of protected areas (not just tiger reserves) for deletion: areas that are too densely populated and without any real prospect for implementing village relocations in the foreseeable future. These areas must eventually be reclassified as ‘community conservation reserves’ or ‘reserved forests’, within which local people and their development needs will have priority over tiger conservation goals.

The report clearly criticises past official curbs on scientific research and lack of transparency in processing research permissions. To its credit, the report tries to give a decent burial to the scientifically discredited pugmark census of tigers based on total counts traditionally practiced in India and mandates a switchover to a sampling-based approach recommended by most scientists. Unfortunately, it has approved a rather technically unsound monitoring scheme jointly developed by Project Tiger and the government-run Wildlife Institute of India (WII). Curiously, the report itself admits that the proposed scheme has problems and recommends the establishment of a technical forum to deal with these.

Dealing with the collapse of protection: Mission drift due to eco-development projects

The most glaring failure of the report has been its inability to take a clear and categorical stand against continuation of various eco-development projects. The undermining of wildlife protection during the last decade has been driven primarily by these projects, which have led to massive corruption, mismanagement of habitats and distraction of staff away from protective duties towards rural development activities. Despite recognizing this problem in its analysis, TTF has strangely allowed the continuation of eco-development projects that are already in the pipeline, merely satisfying itself with a gentle admonition to the government to be more careful in the future.

The sections of the report that deal with anti-wildlife trade operations and field protection needs are rather poorly done. Just as one example, the report suggests that the proposed anti-wildlife crime bureau (which deals with trade issues) should be handled by a forester instead of a police officer from the Home Ministry. The reason offered for this illogical recommendation appears to be a need to maintain current hierarchical order within the MoEF, an agency that has failed substantially to curb the burgeoning tiger trade. The TTF report also gives a short shrift to practically addressing the very real problem of the state governments’ role in field protection, particularly the issue of political interference in the posting of competent officials to nature reserves.

Condoning recent failures of Project Tiger and the MoEF

The Prime Minister appointed the TTF because the country perceived there is a serious tiger crisis. The responsibility for this failure has to be borne both by the Central Government (MoEF and Project Tiger) and the State Governments. Even while assigning such blame, it appears to indulge in a curious partisanship. Rajasthan is severely chastised while Madhya Pradesh is let off gently. It ignores the failures of the latter, such as those in Panna and Indravati, and the fact that Kanha still has many unrelocated villages after 30 years of well-funded ‘management’.

The report has failed to note that at the landscape level, tiger habitats have begun to fragment severely under new ‘industry-friendly’ project clearance procedures put in place by the MoEF. Nor does the report recognize that no new village relocation initiatives have emerged in the last four years, and, much of the earlier initiatives in relocation (including Bhadra, Nagarahole and Kuno-Palpur) have been executed under the previous director.

Consequences of the report

The TTF report entrusts responsibility for implementing its recommendations on two institutions run by MoEF—Directorate, Project Tiger and the Wildlife Institute of India (WII). Thus, it continues the same top-down, bureaucratic tiger conservation approach that it criticizes throughout its own report. Project Tiger and WII are essentially two weak institutions, whose numerous failures are well known within the conservation community.

In the final analysis, the TTF report may lead to a few good things: perhaps a more open attitude towards research and science, at least in the long run. Another positive outcome could be a more serious examination of carrying out village relocations out of critical tiger habitats as a time-bound, multi-Ministry effort. The decision to make the report accessible to public scrutiny on the Internet is a bold move, for which the TTF must get credit.