NTFP Collection and its Impact on Forests in the BR Hills, Karnataka 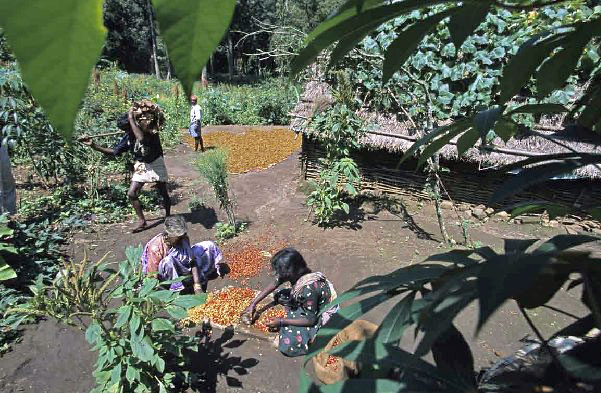 Sandesh Kadur
Linking conservation and use of forest resources with the economic interests of local people can still foster sustainable use.

Although the collection of NTFPs (Non-Timber Forest Products) is an age-old practice in India and many other parts of the world, there is little concrete knowledge about the sustainability of long-term, intensive extraction of forest fruits, roots, shoots, bark, resins and other products, and what ecological changes follow the commercialization of an NTFP. Such information is required – by foresters, conservationists and local people – to understand the ways in which wild resources are being manipulated, the subsequent ecological impacts, and to foster sustainable use of resources. Aditi Sinha and Kamaljit S. Bawa studied the extraction of two species of NTFPs by the Soligas of the Biligiri Rangan Hills and published their findings in 2002 in the journal, Forest Ecology and Management (168: 289–300). Their findings are summarized herewith.

Today, in many parts of the world, harmful harvesting methods are threatening the very existence of NTFPs.

In many places, traditional, non-destructive methods of extraction of NTFPs have been replaced by methods that are less time consuming and labor-intensive, but where the target species is damaged or killed during the process of extraction, NTFP extractions seem to be generally unsustainable.

Harmful harvesting methods and excessive harvesting of various products from the Amazonia have resulted in reduced fruit yields as well as damage to forest structure. Local communities in central India that collect flowers of Madhuca latifolia (Mahua) tend to break the apical twigs of the trees; such a practice affects flower production in the following year. Some other studies have reported forest degradation due to uncontrolled exploitation of forest products.

In India, millions of people living in and around forests subsist on collecting NTFPs; local and indigenous people usually have usufruct rights to extract NTFPs from protected areas. A significant percent (over 50%) of the revenue of the Forest Department comes from NTFP extractions and 75–80% of forest export income comes from NTFP exports, and these numbers have been rising. Extraction patterns of honey, soapnut, and Indian gooseberry have gone from subsistence-collections to large-scale commercial extractions over the last few years. The NTFPs extracted are contracted to traders or to cooperative societies and these products, either in raw or processed form, eventually reach the local, regional and, in some cases, international markets.

So, if an NTFP becomes commercially valuable, can the levels of its extraction be determined and driven by market forces, and can such increased demand change the more traditional low-impact resource extractions?

Today, with increased market demand, NTFPs have come to play an important role in large-scale commercial income generation and employment in many parts of the world. The role of NTFPs in improving rural economies is well acknowledged, and in some cases can generate more income than timber. In Madhya Pradesh, about 40–63% of the total rural income comes from collection and sale of NTFPs. There are many examples where harvesting choices and techniques have affected the extracted species and ultimately led to their depletion.

The Soligas are an indigenous people who live within the forests of the Biligiri Rangan Hills in the Western Ghats. They make a living by extracting a wide variety of NTFPs such as fruits, soapnut, honey and lichens. The two focal species of the study, Phyllanthus emblica and P. indofischeri are commonly called Indian gooseberry or amla. The fruits begin to disperse around November and mammals such as sambar, barking deer, mouse deer and chital eat the fleshy fruits that fall to the ground, and regurgitate the hard fruits containing the seeds.

The Soligas were given usufruct rights to harvest NTFPs and ca. 1–2 ha of land per family within the wildlife sanctuary to practice settled agriculture. As the income derived from settled agriculture is low, the Soligas rely extensively on NTFPs for their income; a Soliga household may derive up to 50% of its cash income from extraction of NTFPs. The most heavily harvested NTFPs are the two fruits from the Phyllanthus spp. which have a high potential for generating revenue and contributing significantly to the Soliga economy and subsistence. The Soligas harvest fruits from December to mid-February and sell them to traders through a tribal co-operative society. The fruits are used for preparing pickles, jams, herbal medicines, and cosmetics, as well as in tanning and dyeing.

The harvesting techniques used by the Soligas at the time of the study were negatively impacting the very resource that sustains them. Lopping of branches reduces fruit production in the following year, and cutting of trees may make extraction unsustainable. A high percent of the tree stumps ultimately die and are further prone to death from fire. The survival of reproductive adults is an important parameter that determines the rate at which populations grow. Thus, any factor, such as harmful harvesting techniques, that lowers the survival probability of adults will decrease the rates at which the populations grow thereby.

The study was conducted while accompanying the Soligas on their harvesting trips for both P. emblica and P. indofischeri, the most heavily harvested fruit. These were some of the questions raised and answered.

There was considerable variation in fruit production in both species from one fruiting season to the next. In P. emblica, found in the deciduous forest, the average productivity during 1995–1996 was almost four times that of the following year. Fruit production in P. indofischeri in the scrub forest showed a substantial decline between the two time periods.

What factors influence the Soligas’ decisions in fruit choice and the extent of collections?

The Soligas tend to harvest fruits from trees that have larger fruit crop size. Similar preferences were observed among extractors of Brazil nut in the forest of Peru and Tagua nut in Ecuador, where fruits from the most productive trees were collected and the collection strategies ensured higher net gains while decreasing the risks.

What are the techniques used in extraction?

Soligas resort to lopping the entire or most of the canopy or cutting the tree during harvesting. The frequency of such harvesting techniques is higher in P. indofischeri in the scrub forest than in P. emblica in the deciduous forest; a greater percent of tree stumps were recorded in the scrub forest. Trees in the scrub forest are smaller in size and harvesters are unable to climb such small, unstable trees. Therefore, lopping of branches and cutting of canopies makes collections of fruits from the ground more efficient. In addition, harvesting techniques that do not involve lopping and cutting may require longer collection times since a single individual must climb the tree to collect the fruits.

What are the direct impacts of harvesting techniques currently used by the Soligas on fruit production?

Harvesting techniques, such as lopping, showed negative impacts on fruit production in the subsequent year in P. emblica. Lopping of major branches of the tree reduced fruit production in the following year. The effects of such harvesting preferences observed in the Soligas of BR Hills may be neutralized by the inter-annual variation in fruit production; trees that are heavily harvested one year may produce lower fruit yields in the following year and therefore, will be avoided by the Soligas. Moreover, current harvesting levels of fruits per se seem to have less effect on population growth rates than some other anthropogenic pressures.

In BR Hills, the inter-annual differences in fruit production are more pronounced in areas that are burned than at those that are not. The fire season in BR Hills coincides with the flowering season. Intense fires can burn the canopy and destroy buds and flowers, leading to low or no fruit production in the subsequent fruiting season.

Do the harvesting techniques, specifically lopping, increase the susceptibility to infestations by hemiparasites?

At the individual tree level, harvesting of non-timber products, such as fruits, may also lead to changes in flowering and fruiting patterns and lowered yields. These effects may be further exacerbated when harvesting of fruits act together with natural events, such as infestations of trees by hemiparasitic plants. Presence of plant hemiparasites may represent a drain of resources for the plant, the proximate effects of which may be manifested in slower growth rates and lowered levels of fruit yields. Thus, an assessment of sustainability of extractions of NTFPs such as fruits requires an approach that examines the effects of various forces apart from the most obvious, i.e., harvesting intensities.

How can the current harvesting techniques be improved to foster sustainable use of Phyllanthus fruits?

In BR Hills, NTFPs have always played a critical role in the subsistence of the Soligas and, over the last few decades, in their economy. The current patterns of resource use and extractions by the Soligas may be driven by market forces, such that low-impact resource-use is being replaced by harmful harvesting techniques. Improving the institutional and policy framework, and offering incentives to the Soligas for conservation and better management of their resources is an important long-term option. One such incentive involves value addition to the NTFPs, which will ensure higher economic returns to the Soligas for their efforts, thereby permitting a change from harmful harvesting techniques to more benign ones. However, the more immediate management intervention is to encourage the Soligas to adopt harvesting techniques that minimize the impacts of harvesting fruits on Phyllanthus trees by creating awareness. This is currently being done through meetings between the Soligas and various non-government organizations working in BR Hills, and participatory resource monitoring.

The forests of BR Hills have had a long history of human influence through various activities, such as harvesting of fruits, fire and the spread of invasive plant species, and their intensity and frequency have changed over the years. Linking conservation and use of forest resources with the economic interests of local people can still be a viable management option that might foster sustainable use.