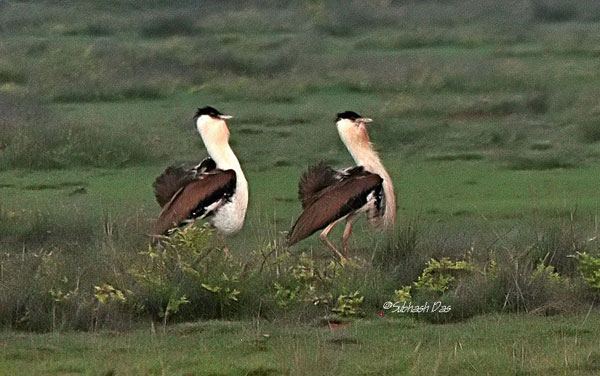 Under 600 Great Indian Bustards are left in the world

One of the most significant and exciting achievements of Indian ornithology, in recent years, was the rediscovery of the Jerdon’s Courser in 1986. The last authentic record, by Howard Campbell, was in 1900. First recorded by Capt. Surgeon T.C. Jerdon, an Indian Army Medical Officer, in 1848, it was subsequently reported by Blanford in 1867 and 1871. Always a rare bird, these limited sightings were restricted to a few river-valleys in Andhra Pradesh. Despite surveys by reputed ornithologists like Salim Ali and Hugh Whistler, the bird remained unseen. In January of 1986, a young scientist, Bharat Bhusan, from the Bombay Natural History Society, finally re-discovered the bird, which was found to be mostly nocturnal. Jubilation engulfed the entire birding fraternity. However, its current status remains as fragile as ever. A similar joyful story involves the Forest Spotted Owlet, one of India’s most elusive birds. After its last confirmed sighting in 1884, there were several attempts to re-locate this bird and finally, in 1997, a team including Ben King and Pam Rasmussen came upon one in Melghat Tiger Reserve in Dhule region of Maharashtra.

Till recently, there existed only one confirmed specimen in the world of the Large-billed Warbler collected by the legendry A.O. Hume at Rampur Bushair on the River Sutlej in Himachal, in November 1867. This bird was not found for the next 139 years, till Philip Round mist-netted a live bird in Thailand in 2006. Sumit Sen and his team found and photographed this elusive bird in Narendrapur near Kolkata the next year. I was lucky to see a pair at the same place. It has never been seen again in India! There are, however, some unsubstantiated reports from the Kanha area in Madhya Pradesh.

Another bird species that has been presumed extinct for several decades is the Pink-headed Duck.  It was always thinly distributed through the wetlands, swamps and wilderness areas that formed around the river systems of the vast plains of Bengal and what is now Bangladesh. The reed-beds along the rivers have now long since been cleared by the burgeoning human population and the isolated enclosed waters have disappeared. Little is known about this duck and only a handful of skins remain in museum collections. It was last reliably seen in 1936, though it is possible that a few survived as late as the forties in private collections in England. A few claimed sightings in recent years have not been accepted. A duck that might meet a similar fate in India is the White-winged Wood Duck. This forest duck is in danger of extinction largely because it has a very small and fragmented population, which is undergoing a very rapid and continuing decline as a result of deforestation, wetland drainage and hunting. Nameri, in Assam, is about the only place it can be reliably found, though I drew a blank on a recent trip there. Only about 400 survive in India and an equal number is distributed in the neighbouring countries in South-east Asia. Other ducks under threat and suffering from the loss of suitable habitat and hunting include the Andaman Teal, the Fulvous Whistling Duck, the Comb Duck and the Cotton Pygmy Goose.

Little is known about the Himalayan Quail, which was first reported in 1846, from a private collection in England, and last seen in 1876. Always a difficult bird to flush and the few specimens that were found are from the Mussourie and Nainital area of Uttarakhand. Several expeditions to find the bird have returned empty handed.

But there have been some other wonderful stories as well and one concerns the Mishmi (Rusty-throated) Wren Babbler, which was known from one dead female specimen collected by Dillon Ripley and Salim Ali from the Mishmi Hills area of Arunachal Pradesh in 1947. No individual was seen again till Julian Donahue and Ben King managed to lure one out in November 2004. Since then it has been established as being locally common. But perhaps the happiest story of all is the discovery of a completely new species–The Bugun liochicla, which was discovered during the Eaglenest Biodiversity Project initiated by Ramana Athreya in partnership with one Mr Indi Glow of the Bugun tribe, who live on the periphery of Eaglenest Sanctuary in Arunachal Pradesh. A series of observations in 2005 and 2006 confirmed its taxonomic status as a species new to science and it was formally announced to the world on 12 September 2006.

This thrilling discovery hides a very serious trend in the world of Indian conservation, as birds are treated as second-class citizens and (along with butterflies, insects, fish and snakes) are a major victim of ‘mega-fauna hegemony’, which in simple words means that most of the money spent goes to the tiger, at the cost of lesser denizens. The fact that there are under 600 Great Indian Bustards left in the world does not seem to concern the powers that be. Why should this large bird be any less important than the tiger? The fate of its lesser cousins, the Bengal and Lesser Florican, is even more dismal and the day of their extinction may not be far away. Loss of habitat, particularly the grasslands, is a major cause of their decline. Under pressure from the ever-growing population, large tracts of land are being converted into agricultural land. It is not only the large birds that are being threatened by this mad rush for cultivable land. Smaller game birds like francolins, partridges and quails are losing their breeding territories. Smaller grassland birds like bushchats and stonechats too are declining.

About eight per cent of India’s birds are under extreme threat and the plight of the vulture is well documented. The offending drug, Diclofenac, has finally been officially banned, but is still in surreptitious use. This along with the shortage of suitable tall trees to breed and the changing pattern of milk production, resulting in the reduction of dead cows to feed on, may mean that we lose them in our lifetime. The loss of tall trees has also affected the breeding of birds like all the hornbills, the Greater and Lesser Adjutants and the Black-necked Stork. The draining or drying up of wetlands has meant that birds like the already endangered Swamp Francolin are losing their habitat. Political games often result in man-made disasters, as was highlighted in the recent case of Bharatpur, India’s showcase wetland. Water was denied to it and instead diverted into the fields in order to garner popular political support. Already in the public eye, because its most famous visitor the Siberian Crane stopped coming from 2002, this Ramsar Site and World Heritage site is being destroyed, and though there have been some efforts recently to revive it following the outcry, unless these are sustained there is little hope for the future. There are alarming reports that the numbers of the House Sparrow too is declining rapidly, at least in the urban areas, due to the concretisation of our cities and towns.

What do we do to prevent and arrest this decline of our avian wildlife? Hunting is one of the major problems and the illegal netting of game birds for food and the trapping of pheasants for the pet trade is a constant issue. The entire tribal belt in the north-east believes that hunting is their birthright. The most important need, of course, is the continuing preservation of their habitat. Not content with destroying the entire Teesta Valley in Sikkim, the Government is hell-bent on finishing off the last of our pristine forests in Arunachal, by a series of dams and other ill-planned development projects. Our Prime Minister, a great believer in the wisdom of the World Bank—which has a dubious environmental record—has himself inaugurated a series of dams in the Dibang Valley area of Eastern Arunachal, thereby administrating the kiss of death upon the Valley of the Gods. Quo Vadis India.