Frontline of a New War: Environmentalists Under Threat 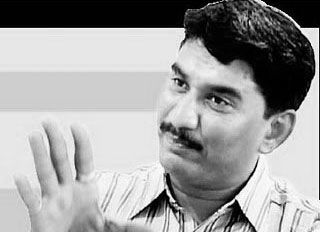 Amit Jethwa's campaign against illegal mining in Saurashtra was relentless. And possibly, he paid for this with his life.

‘Amit Jethwa shot dead’ read the SMS received at about 9 pm on July 21st. I did not know him personally, but I knew Amit,  activist, and warrior for any ecological cause — be it the case of an elephant being treated cruelly in a circus or illegal mining in Kodinar bordering Gir or protesting against a shipyard that would impact the nesting of olive ridley turtles. It was a sleepless night, and I spent most of it trying to reconnect, build up history by going through old mails. There were many over the years covering a myriad of causes, most marked ‘URGENT’, most signed off with “Please do needful, and highlight at national level.” One of the first issues he drew my attention to was what he termed a ‘fictional’ report by the Gujarat forest department that said ‘wildlife like Great Indian Bustards in Gujarat is thriving (it’s not) and that Gujarat’s ecology is not in danger (I wish).”   His detailed note contradicting such superficial statements was well-researched. Nothing fazed him. He rallied against the expansion of a cement factory bordering Barda sanctuary, which also hosts the lion, brought to light smuggling of wood from Gir, protested against encroachment on a wetland in Bhavnagar. He tired hard to get suppressed evidence of Salman Khan and his colleagues’ alleged killing of Chinkara in Banni in Gujarat during the shoot of Hum Dil De Chuke Sanam.

One of his major fights was limestone quarrying in a critical lion corridor and its faulty, fraudulent  Environment Impact Assessment. Amit’s campaign against illegal mining in Saurashtra was relentless. And possibly, he paid for this with his life.

Amit  was among those rare beings who looked beyond their own narrow world, and put the cause before their own self. He cared. With him, environment and wildlife has lost a fierce protector.

Such incidents are common place in the Amazon, where the struggle to save the tropical forests has claimed many victims. Here in India, Amit’s tragic death highlights a dangerous trend of environmental groups and activists increasingly under threat and victimized for protesting against, and coming in the way of projects with grave ecological consequences. Early July, a friend called with the news that a young couple Kavita and Shiv Prasad from Syalna a village in Pauri Garwal were beaten up and stoned for protesting against illegal timber felling. Kavita almost lost the baby she was carrying. The police was not interested in filing an FIR, the hospital was delaying in issuing a medical report, and the couple needed some police protection—the goons were still threatening them. Could I help, did I know someone ‘higher-up’ to counter the influence of the timber lobby? A few months back, Debi Goenka and his colleagues of Conservation Action Trust were attacked by land sharks at Kandarpada-Dahisar in Mumbai while they were surveying mangroves. Conservationists Bittu Sahgal and Shailendra Yashwant were sued when they opposed the setting up of a pesticide plant by United Phosphorus in Vapi in  Gujarat. Conservation scientist Dr Ullas Karanth and his colleagues who fought mining in Kudremukh National Park suffered through a relentless disinformation and slander campaign. The number of forest staff that has been threatened and murdered by poachers and timber smugglers is legion.  The list is endless, and such targeted persecution is a  worldwide phenomenon: I will only quote the brutal killing of two environmental activists who opposed mining projects in the central Cabañas (El Salvador) in December 2009. One of them, Dora Alicia Recinos Sorto, was eight months pregnant when shot dead in front of her two-year-old child, also wounded in the attack.

At equal risk are reporters who cover environment. So much so, that Environment reporting has been called the ‘Front Line of a New War’. Reporters Sans Frontieres, the Paris-based media watchdog has published two consequent reports which state that exposing deforestation, pollution and environmental damages may be dangerous in many countries—including India–and has drawn attention to 13 cases of journalists and bloggers who have gone missing (probably killed), savagely assaulted, jailed, threatened or censored because they were trying to turn the spotlight on environment destruction.  For instance, Bulgarian reporter Maria Nikolaeva was threatened with having acid thrown in her face.

I know where that comes from. A colleague was nearly run over by illegal miners in Goa, another faced dire consequences for exposing illegal encroachment.  I have been threatened, detained and my driver roughed up by miners, as well as ivory traders.

Fact is:  the stakes in environment  are very  high  and in an unequal society the fight to control fast depleting natural resources is getting edgier throwing communities and big corporates into bitter battle.  For long, the perpetrators got away. Now, when projects with grave ecological consequences are questioned, those who uncover and expose the inconvenient truth put their lives at risk.