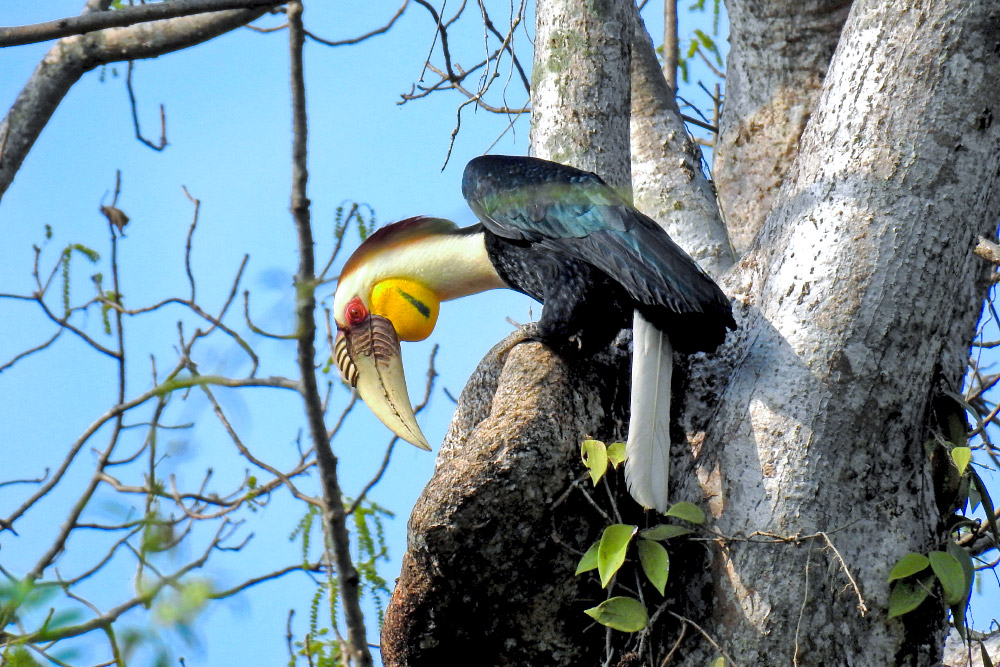 Aparajita Datta
138 hornbill chicks have successfully fledged from monitored nests under the HNAP.

Research on hornbills in Pakke Tiger Reserve (PTR) began with a 4 year PhD study (1997-2000) on various aspects of hornbill biology (Datta 2001). The research program of the Eastern Himalaya Program of the Nature Conservation Foundation (NCF) has continued in the Pakke Tiger Reserve since 2003. Long-term monitoring of hornbill nesting showed that nest sites were limiting and that there was competition for nest trees between hornbill species. While three species of hornbills (Great, Wreathed and Oriental Pied hornbill) and their nests were well protected inside the Pakke Tiger Reserve, we observed severe deforestation and loss of nest trees in adjoining Assam and to a lesser extent in the Papum RF which is contiguous with PTR in Arunachal Pradesh from 1995-2010. Hunting was also a problem, although it had declined after 2006, ever since Mr. Tana Tapi had taken charge as Divisional Forest Officer (DFO) of PTR. To ensure protection of hornbills in Papum RF, NCF along with the local Nyishi community and the Forest Department initiated the Hornbill Nest Adoption Program (HNAP). The HNAP is a unique community-based conservation initiative started in 2012 to empower the local community to protect and monitor hornbill nests outside the PTR.

Hornbills are large birds characterized by their large bills, often with casques. They nest in secondary cavities of large, mostly emergent, trees. The breeding season starts with the pair visiting the nest and engaging in courtship in and around the nest tree.

Hornbills exhibit a unique habit of nest sealing. The female enters the cavity and seals herself by plastering the cavity opening mainly with faeces, leaving only a tiny slit for food to be delivered by the male. Our studies from Arunachal Pradesh show that the female entry and nest-sealing commences in early to late March for the Great hornbill and Wreathed hornbill and in the 1st week of April for the Oriental Pied hornbill. After entering the cavity, the female remains inside for 3 – 4 months. During this period, the male delivers food to the nest inmates.

The Hornbill Nest Adoption Program was launched in November 2011 as a three-way partnership with the Ghora-Aabhe Society (a local NGO) and the Arunachal Pradesh Forest Department (PTR management). The field implementation started from January 2012. In 2017, the Pakke Paga Hornbill Festival Committee was also included as a fourth partner.

The HNAP model is unique as it brings together two sets of external protectors to help hornbill parents breed and raise their chick successfully:

Together, the citizens and the local nest protectors keep the hornbill nest trees and hornbill parents safe during the breeding season and ensure successful fledging of hornbill chicks.

Eleven Nyishi nest protectors are currently employed under the HNAP. From February, they visit known hornbill nests and search for new nests. From the time of female entry until chick fledging, the nest protectors monitor these nests, noting down their observations or any threats perceived in and around the nest trees. During the non-breeding season, the nest protectors walk transects in the Reserve Forest to count hornbills and other wildlife. In the evenings, they monitor ca. 25 hornbill roost sites along the Pakke river (south-eastern boundary of the PTR) and count the number of hornbills of different species using these roosts.

Some outcomes of the HNAP

From 2012 to 2019, a total of 138 hornbill chicks have successfully fledged from monitored nests under this model. Out of these, 34 were Great hornbill chicks, 17 were Wreathed hornbill chicks and 87 were Oriental Pied hornbill chicks. Currently, 38 trees are monitored and protected in the Reserve Forest. Apart from the 1st year (2012), when 4 nest trees were lost due to fire/cutting, no more nest trees have been lost due to tree felling. However, the forest is becoming degraded due to the increased illegal logging in the RF, since 2016.

Using satellite imagery, we assessed forest cover change and found that loss is high in the last 2-3 years. There has been a 35% loss of forest cover within 1 km of 29 nest sites.

We have been pursuing this issue to ensure that logging is brought to a halt at the earliest, but our local efforts had largely failed. A Nyishi conservation activist, Jorjo Tana filed a PIL in April 2019 in the National Green Tribunal against the illegal logging. Following this, ground reports suggested that action was being taken to stop the felling. The NGT has given some preliminary orders but they are yet to be fully effective and the case is ongoing.

Long term monitoring of nests (in both the Tiger Reserve and Reserved Forest) has also revealed that timing of nesting and fruit availability patterns are changing. We have observed that in recent years, hornbills are nesting earlier (in February) than in the past. This long-term data would also help us understand the role of climate change, if any, on hornbill breeding biology.

The most important outcome of this model, however, is the ownership of local people towards protecting and becoming guardians of hornbills in this landscape. The hornbill nest protectors continue to work tirelessly to ensure that hornbills remain safe under their watch.

Contact: hnap@ncf-india.org for more info and how to donate.


Aparajita is senior scientist and Karishma is project coordinator, both at Nature Conservation Foundation (NCF).

Desert Fox Pays the Price of a Smoother Road