Asian Vulture Crisis – It’s Not Over Yet 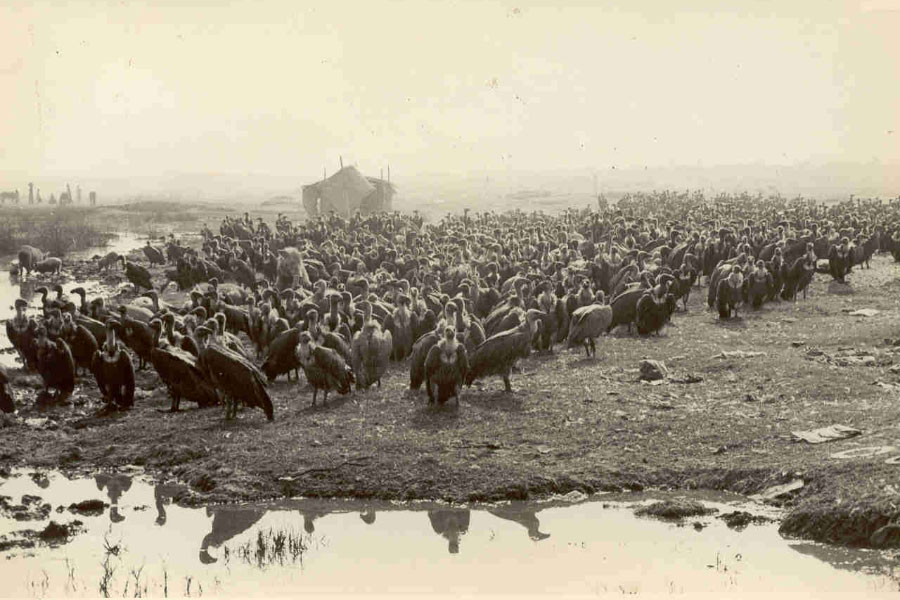 Goutam Narayan
It seems extraordinary that these species are now facing a real threat of extinction having been so abundant and so recently.
Conservation breeding of vultures 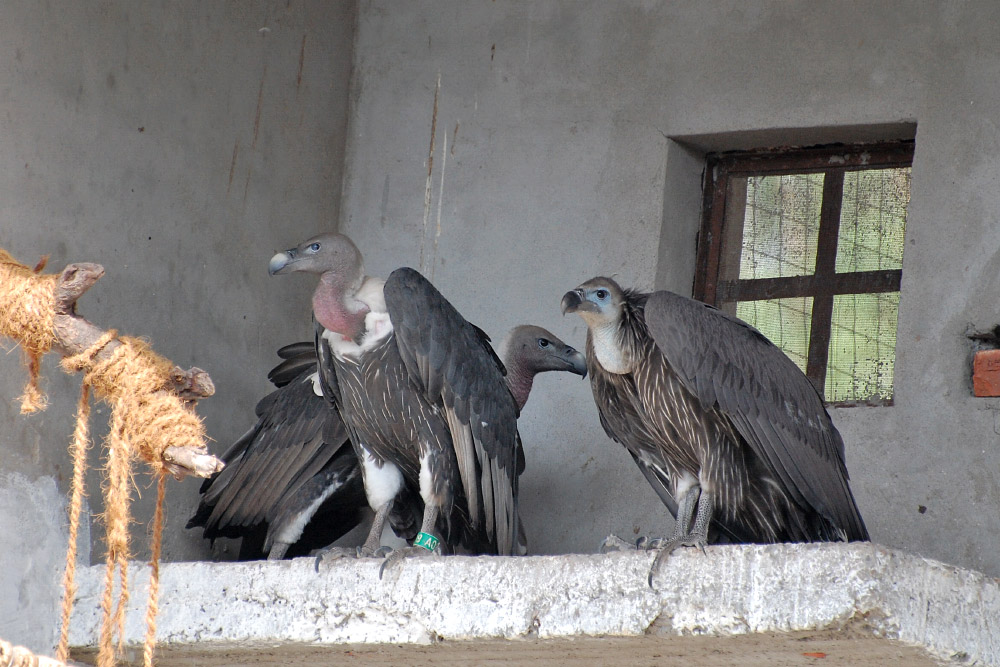 Vibhu Prakash
The very first breeding success at the BNHS-Haryana Govt centre in 2008. The programme now fledges over 60 birds each year.

The widespread use in cattle of the painkiller and anti-inflammatory drug, diclofenac, led to the unprecedented and dramatic disappearance of vultures over the past 20 years. This inadvertently poisoned around 40 million vultures, causing populations to plummet across South Asia. It’s tempting to think that with the government bans now in place for over ten years, the job is done. While there are indeed some early indications that the remnant vulture populations may be stabilising, albeit at very low levels (Prakash et al. 2012), there is no room for complacency. Unfortunately, four of the five vultures endemic to Asia remain ‘Critically Endangered’ according to IUCN criteria (Birdlife 2017), which is the highest threat category short of extinction. These are: white-rumped vulture (Gyps bengalensis), Indian or long-billed vulture (Gyps indicus), slender-billed vulture (Gyps tenuirostris) and the red-headed or king vulture (Sarcogyps calvus).

Back in 2004, two key actions were identified as priority (MoEF 2005): one was banning or removal of diclofenac from veterinary practice (requiring identification of safe substitutes for vets), and the second was to establish viable ex-situ or captive populations for breeding and future release. These were aggressively taken up in the years that followed (Pain et al. 2008), with meloxicam successfully identified as a safe alternative, and bans on veterinary diclofenac largely in place by 2006. Conservation breeding programmes were established in India, Nepal and Pakistan and, since 2008, all three of the most affected vulture species (1-3 above) have been breeding successfully and in genetically diverse and viable numbers (Ishtiaq et al. 2011, Bowden 2009, Bowden 2017).

The reasons for the ongoing concerns however are many: one is that, despite the ban, many veterinary practitioners illegally use human diclofenac formulations for veterinary purposes. So although the use of this drug has come down dramatically, it is still very much an ongoing threat. We were delighted that the Indian Government took another step in 2015 to ban large vials of the human formulation (not legitimately needed for humans) that made the drug available in convenient veterinary-sized packages. However, it’s sobering to note that one drug company, ‘Laborate’, has challenged the ban in the high court. We can but hope that the ban will be upheld.  I’d like to congratulate Coimbatore-based NGO ‘Arulagam’ and the drug authorities for their efforts to ensure that it is.

At the most recent SAVE (Saving Asia’s Vultures from Extinction) consortium annual meeting of experts, held in Mumbai, there was a one-day ‘NSAIDs Alert’ symposium, highlighting recent studies and further alarming trends concerning other veterinary drugs that are now being used by vets in the region. Some of these are also proving to be toxic to vultures (Galligan et al. 2015, Cuthbert et al 2014). So, there is a real risk that one toxic drug for vultures may be replaced by others. Meloxicam is currently the only drug with similar properties that is considered safe, and although it’s becoming more popular, so are some other dangerous compounds like ketoprofen, aceclofenac and nimesulide. Ketoprofen is one unsafe drug that is already being widely used as a replacement for diclofenac, and, despite work showing its toxicity to Gyps vultures, it has not been widely banned. See: Evidence for the toxicity to vultures of NSAIDs other than diclofenac.

Senior drug controllers from Bangladesh, India, Nepal and Pakistan attended the above SAVE meeting, and the early signs are rather positive, with Bangladesh quickly declaring a regional ban of ketoprofen and aceclofenac in February 2017, which we hope will pave the way for national and wider measures in the region. The urgent priority and need is for safety-testing of such drugs on vultures, and this is being taken up in India. What we hope will be ground breaking for vulture conservation is a collaboration between SAVE partners, including the Government body, Indian Veterinary Research Institute, which could ultimately lead to only vulture-safe drugs being licensed for veterinary use, and also to identifying other safe alternatives.

There are other, more localised threats, which could prevent vulture recoveries even if the painkiller problem is fully resolved, and these need careful monitoring and attention. The use of poison baits targeting dogs, leopards and other mammals can inadvertently kill large numbers of vultures. This is a growing problem, particularly in Africa and in parts of India. Powerlines and windfarms can also sometimes kill large numbers of vultures. Other factors like kite string injuries can also impact populations in some places. A full review of threats will soon appear in the Convention of Migratory Species Multi-species Action plan for old world vultures (this will hopefully be ratified in Manila in October), which draws heavily on the agreed action plan or Blueprint for south Asian Gyps vultures.

In India, the conservation-breeding programme was initiated in Haryana as a joint BNHS and State government project with significant support from the Royal Society for Protection of Birds (RSPB) and other SAVE partners, initially bringing Darwin Initiative (UK Government) support. This extended to other centres in West Bengal, Assam and Madhya Pradesh and also involved the Central Zoo Authority, which has established other similar centres. Nepal (Bird Conservation Nepal, National Trust for Nature Conservation and the Government Wildlife Department) and Pakistan (WWF Pakistan with Punjab Provincial Government with Hawk Conservancy support) also established smaller facilities for one of the three species, Gyps bengalensis, and have more recently reached the stage of fledging their first chicks. Meanwhile, the vulture conservation breeding programme in India produces over 60 fledged birds per year (species 1-3 above), where the Government (in partnership with BNHS) is now supporting an increasing proportion of the costs (particularly in Haryana).

A preliminary trial release of two Himalayan Griffons happened in Haryana in 2016. Apart from being an instructive process, this event drew much attention to the breeding program due to visits from high profile members of the government such as India’s Environment Minister and the Chief Minister of Haryana.

Meanwhile, the first release of the Critically Endangered white-rumped vulture is moving ahead in Nepal. The birds, which were moved to a pre-release aviary in April 2017, are all set for release in November 2017. The RSPB-Bird Conservation Nepal team has satellite-tagged six wild birds in the area to monitor their movements and survival and this has already yielded important information on trans-boundary movements and newly recognised feeding sites in Uttar Pradesh. The released, captive-reared birds will be similarly monitored. We anticipate release of this species in Haryana, India in early 2018, once satellite tagging permissions are in place, and further work by the BNHS and Haryana Government has been carried out to ensure that diclofenac and other toxic drug use within a 100 km radius have been sufficiently reduced. Monitoring the success of these releases will be crucial to finding out how safe the environment really is, and the prospects for vulture populations in the future.


Chris has worked for the RSPB and BirdLife International for over 30 years, mainly coordinating research and conservation efforts for Critically Endangered Northern Bald Ibis and Asian vultures. He is International Species Recovery Officer & Saving Asia’s Vultures from Extinction (SAVE) Programme Manager. He is currently based in Bangalore. 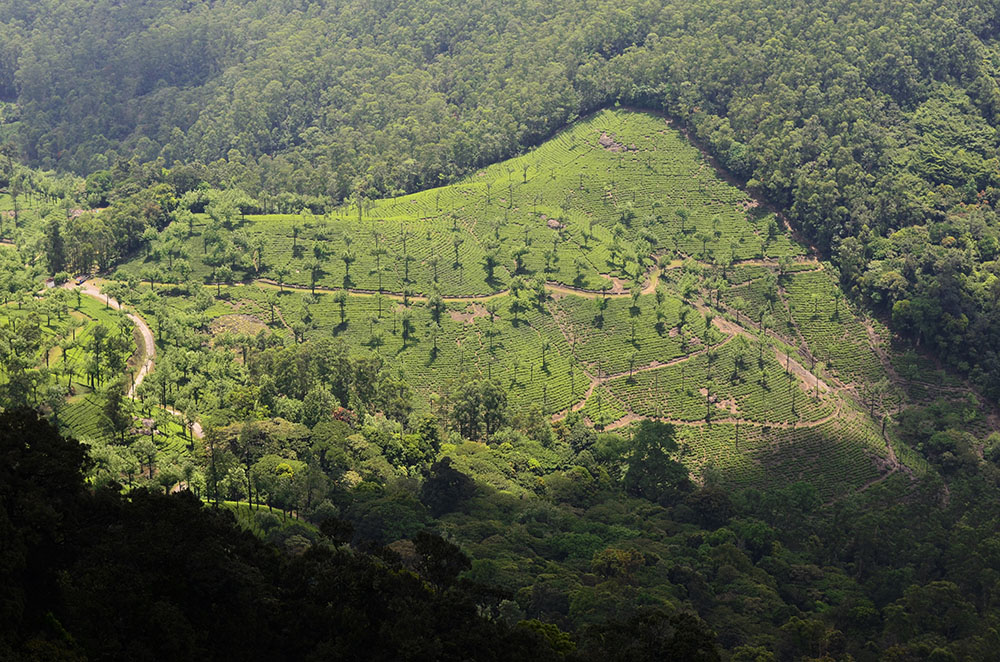