Status of the Asiatic Elephant (Elephas maximus) in India 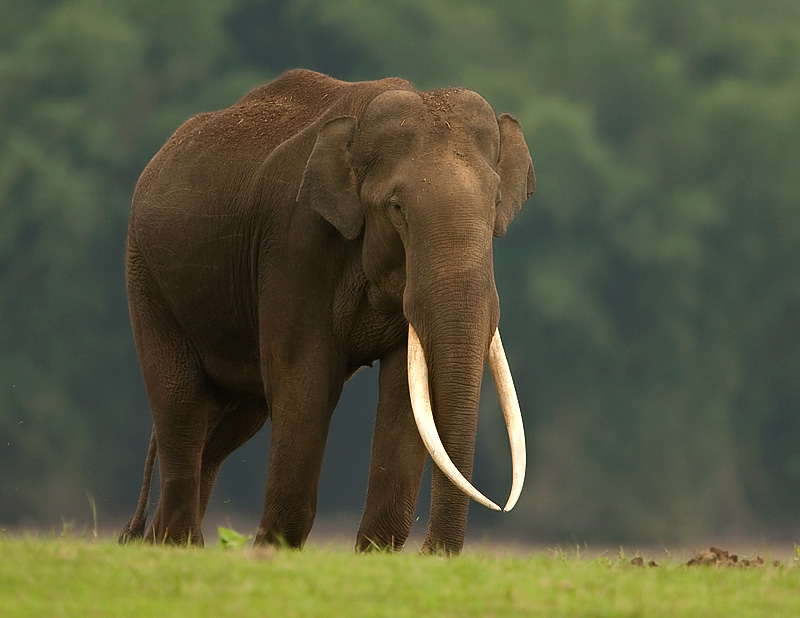 The Nilgiris-Eastern Ghats reserves which includes Nagarahole spread across Karnataka, Kerala and Tamil Nadu is known as “Asia’s elephant empire”, with about 10,000 elephants.

India is home to the largest number of Asiatic Elephants. The last census in 2007 estimated the population at 27,000, a supposed increase of over 1,000 from five years ago. But before we jump to the happy conclusion that ‘all is well’ with the elephant, we must closely examine this claim of an upward trend, which seems dubious in the face of the twin threats that the species continues to face – poaching and habitat loss.  Only about five percent of the species’ original habitat remains, and even this is fragmented by highways, railway lines, canals, reservoirs, tourism infrastructure and power transmission lines.

With natural habitats shrinking and getting fragmented, man and elephant are thrown into conflict.  Sonitpur District adjoining Nameri National Park in Assam is one the most severe man-elephant conflict areas in India. Annually, about 40 people die in tragic encounters with elephants — and the number of elephants killed in retaliation is about the same.

Reserves in the Western Ghats, Nilgiris and Eastern Ghats, spread across Karnataka, Kerala and Tamil Nadu are collectively known as “Asia’s elephant empire”, with about 10,000 elephants. But this region is conflict-ridden too. In the past two years, over 30 elephants around protected areas in Karnataka have met a grisly end from electrocution. Farmers sometimes illegally electrify their fences with High Voltage Alternating Current tapped from high-tension lines rather than install safe but expensive battery-operated electric fences. In Uttarakhand, near Rajaji National Park, no less than 50 bullets were pumped into an elephant that ventured into the fields and killed one person in May 2008.

Elephants are nomadic animals that move through large traditional home ranges to known sources of food and water. Sadly, the forests they once knew are now tea gardens and paddy fields, or submerged by dams or devastated by mines.

Affected by loss of habitat, and starved (due to shrinking, over-grazed habitat) elephants may raid crops, destroy huts and other obstructions and occasionally kill helpless people protecting their properties. In retaliation, people poison or electrocute them or, even, blow them up by placing crude bombs in delicacies like jackfruit.

Poaching is the other very serious threat. Elephants are poached for ivory, which is much in demand for artifacts, jewellery and ‘hankos’, which are personal seals used by the ‘privileged’ in Japan.   Experts estimate that India has only about 1,200 tuskers (among Asiatic elephants, only males have long tusks and are therefore known as tuskers). Orissa is a poaching hotspot with the highest number of tuskers in the country, but the population has taken a beating.  Many tuskers have been mercilessly shot by poachers in Orissa, and their numbers have plunged sharply to 271 in 2005 against the previous count of 363 of 2002 (Orissa state census).  In recent years, the poaching has only increased. The Similipal Tiger Reserve in Orissa, for instance, is reported to have lost about 16 elephants in the first six months of 2010 (Click here for the report by Belinda Wright and Biswajit Mohanty).

The need of the hour is to first estimate the current population of Asiatic elephants using the best science, and recognise and take effective action against the grave threat these gentle giants face from poaching and loss of habitat.


The author is an award-winning conservation journalist and has authored books on wildlife. She currently edits TigerLink