A Wildlife Survey along the Khanduli River, outside Ranthambore

The river Khanduli emanates from the Mansarovar dam, situated south of Ranthambore National Park and heads along the Eastern boundary of Sawai Mansingh Sanctuary. It gradually drifts Southeast and merges with the mighty Chambal, in the National Chambal Sanctuary. The Khanduli flows through a mixed-use landscape comprising of forest, agricultural fields and plantations. However, like the Chambal, the Khanduli river floods heavily during the monsoon and as a consequence the most dominant features along its course are its ravines. These ravines are a myriad network of gullies and channels and form an important refuge for wildlife. In the dry season, segments of riverbed become attractive pastures for hundreds of heads of cattle, while there is also some marginal dependence on the water for agriculture. A portion of these ravines are part of the tiger reserve buffer flanked by agricultural fields on one side and Sawai Mansingh sanctuary on the other. It was this interface along the Khanduli that was surveyed to understand what species occur in such human-dominated environments in the buffer area as well as outside Ranthambore Tiger Reserve.

As part of a larger international project aimed at capacity building in biodiversity informatics, Vidya Athreya (Wildlife Conservation Society – India Program & Centre for Wildlife Studies, Bangalore) in collaboration with the Tiger Monitoring Cell (Ranthambore Tiger Reserve, Rajasthan State Forest Department) and Dr. Dharamendra Khandal (Tiger Watch, Sawai Madhopur) initiated a camera-trapping survey along the Khanduli and an adjoining rivulet outside Ranthambore Tiger Reserve. The survey was conducted by Girish Punjabi, with the help of Forest Department staff in the months of April and May, 2012 and a total of 14 camera-trap locations covered the entire landscape of c. 40 km2 in area. A total effort of 130 trap nights were invested over the entire survey period.

The survey detected 12 species of mammals, including seven species of carnivores occurring in the area. Carnivores captured on camera included the tiger, leopard, hyena, sloth bear, jackal, jungle cat and the rare caracal. Other species found were sambar, nilgai, wild pig, Indian hare and porcupine. (Please note that images are heavy and may take time to render).

Caracal (Caracal caracal): The caracal is a rare medium-sized solitary cat occurring in North-West India, although its range extends from Asia into Africa. It is known to prefer dry woodland, scrubs and arid mountainous habitat, but in Africa it is also recorded in evergreen and montane forests. It is known to tolerate agricultural landscapes with cover. Although recorded from Ranthambore, sparse information exists about its status and distribution in India.

Tiger (Panthera tigris): This large adult male tiger was captured twice at different locations along the Khanduli river. We also captured another tigress along with a cub. Tiger stripes can act as finger prints, and by observing the stripe pattern one can identify unique individuals to estimate the population of tigers in a reserve in a capture-recapture framework.

Leopard (Panthera pardus): Leopards are perhaps the most adaptable of all big cats and are known to survive in varied habitats and subsist on a varied niche of prey species. This male leopard was captured on its kill, a large cow which had been depredated upon less than a kilometer distance from a village.

Hyena (Hyaena hyaena): The only hyena in India, this species seems to prefer open semi-arid habitats, especially dry-woodland and mountainous terrain. Known to be a principal scavenger, however its hunting ability is poorly understood. Sexes difficult to differentiate visually. Known to form monogamous breeding pairs and pups of earlier seasons may remain as ‘helpers’.

Sloth bear (Melursus ursinus): The only myrmecophagus (ant-feeding) species of bear that widely occurs throughout India. It is also know to eat honey, tubers, flowers and fruits. Aggressive species and sometimes attacks humans. Home-ranges overlap extensively and home-range sizes and densities vary according to resource availability.

Eurasian stone-curlew (Burhinus oedicnemus): These birds were captured in the early morning hours having a drink at a water body. The species name oedicnemus means ‘thick-kneed or shinned’ in Greek, thus the common name thick-knee is also used.


Girish is an Alumnus of the Post Graduate Program in Wildlife Biology & Conservation from NCBS, Bangalore. He is interested in varied aspects of carnivore ecology, especially in human-modified landscapes in the tropics. 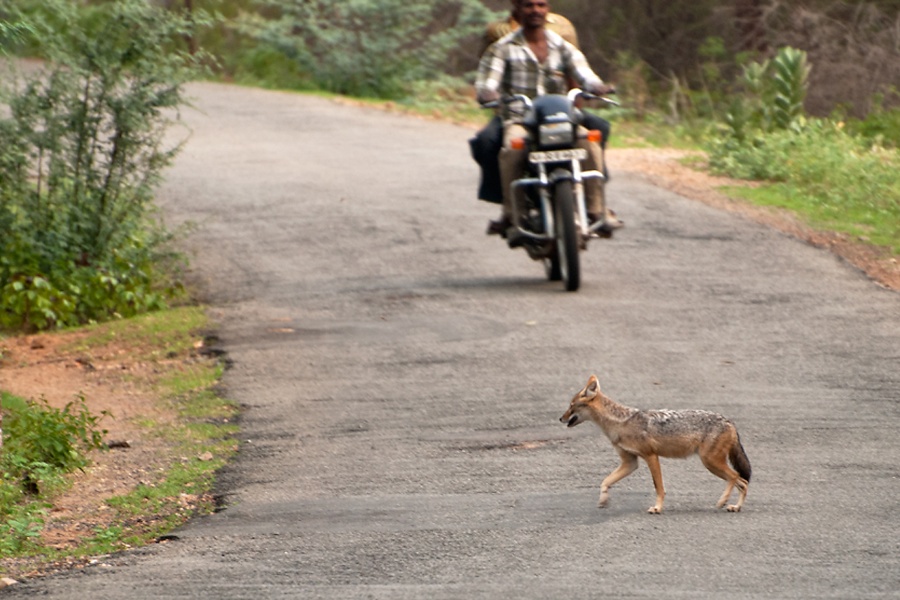