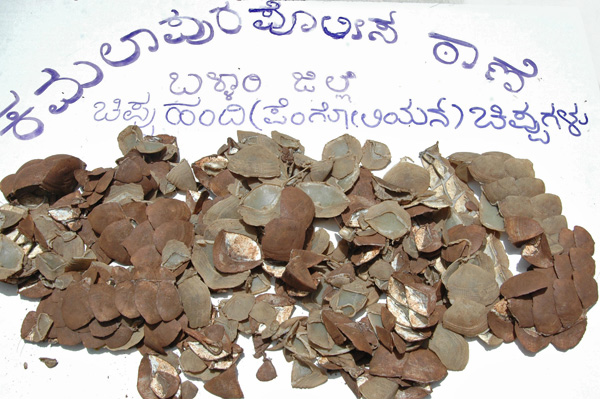 Conservationists headed by Santosh Martin, President Sloth Bear Foundation and also the honorary wildlife warden of Bellary district, Karnataka, with the help of Kamalapur police have unearthed a major organized international wildlife trade in Bellary district with the seizure of several kilograms of Pangolin scales. These scales were heading towards China and other south Asian Countries like Korea, Taiwan, etc., where the demand for scales and other animal body parts has increased exponentially over the recent years due to economic boom.

On a tip-off, the Kamalapur police arrested one person, Babu who was carrying pangolin scales. On interrogation, Babu led the police to the hunters from where he was regularly sourcing the animal parts. Yerriswamy, Papaiah, Mareappa and many more from Sandur, Kurugod, Gangavathi, Rampur, etc., in Bellary district are a part of this organized crime. Police and forest officials posing as buyers were able to nab seven hunters and traders, three escaped the arrest. This is just tip of the iceberg as the many more are involved in this crime not only in Bellary district but also in neighbouring Ananthapur (Andhra Pradesh) and Bangalore. The kingpin in Ananthapur collects the scales and other animal parts from the local traders and sells them to a buyer in Hyderabad. It then reaches China via Sikkim and Tibet. Andhra police are assisting the Karnataka police in nabbing these criminals.

Experts estimate that several hundred Pangolins were killed in Bellary district in just the last two months alone. With the average price for a kilogram of these scales skyrocketing to over a lakh of rupees in the international market for the traditional Chinese medicine, it has triggered many local hunters and trappers to take up this lucrative trade and make a fast buck. The rocky scrub jungle of Bellary district is ideal pangolin habitat and they are very active during the rainy season when they come out to feed on ants. Snares are placed near their holes and to trap them. Trained dogs are also used to locate pangolin burrows.

Naturalists and activists along with Forest department officials in Kamalapur area have been patrolling the area for several months but were not successful as this poaching does not involve firearms. Police CIDs from the forest cell are working to nab the remaining involved in this trade. They are finding it difficult to nab them as the news of the arrests has put every poacher on high alert.

Pangolin is a critically endangered mammal placed in Schedule-I of the Indian Wildlife (Protection) Act, 1972. This ground-dwelling, scaled mammal measures close to a metre in length and weighs about 12kg. Completely covered from the neck to the tip of the tail with hard armour-like scales, this unusual creature more closely resembles the new-world armadillo. The scales are tough and made up of agglutinated hair, somewhat like rhinoceros horn.

In 2000, a complete ban on international pangolin trade was adopted by Parties to CITES (the Convention on International Trade in Endangered Species of Wild Fauna and Flora).

For a detailed account on the Pangolin and its trade please read: Pangolins: ‘The New Rhinos’

Whose Forest is it Anyway?