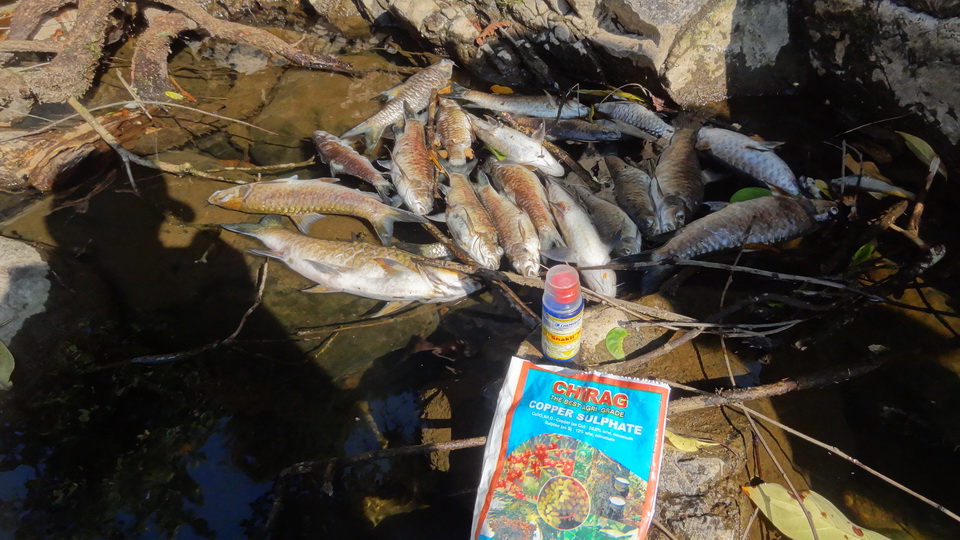 The indiscriminate use of chemical poisons to kill fish has horrendous consequences all the way up and down the food chain. Crabs, aquatic insects, otters, birds and humans who consume the poisoned fish are also affected. Animals that drink the poisoned water are also extremely vulnerable. This is an example of a 'traditional' method morphing into a catastrophe.

Kumaradhara River, a major lifeline of Netravathi Basin, hosts an impressive diversity of fish species, including endemics such as Garra Gotyla stenorhynchus, Barilius canarensis and Tor malabaricus. The River has nourished the local communities with fish for centuries, which have traditionally been harvested using gill nets, cast nets, passive fish traps and plant-based fish poisons. However, more toxic and destructive methods of fishing have become a convenient alternative in recent times. Most locals now use low cost, easily available chemical pesticides such as Cyclomethrin, Copper sulphate, Chlorpyrifos and Lambda-cyhalothrin. Unlike natural plant based fish poison, chemical poison has a stronger and more persistent ecological impact. The poisoning season starts after the first rains in April and continues till the month of June. During these months, many fish move upstream to spawn and reproduce. Since water levels are relatively low during these months, the impact of chemical poisoning is more lethal. Though larger fish are targeted, the killing is indiscriminate. Shrimps, crabs, water beetles, other aquatic insects and incalculable aquatic microbes are decimated. Juvenile fish are highly susceptible to chemical poisoning and get wiped out almost immediately. Such large scale mortalities of juvenile and reproducing adults can greatly alter fish population structures. The threat of bio-accumulation looms large as birds and otters consume poisoned fish while wild animals drink water from poisoned rivers. Since people consume the poisoned fish and use this contaminated water for drinking and agricultural purposes, they stand to be affected as well. Multiple fishing parties are commonly encountered along the river basin. A particularly devastating incident was witnessed where local people had used chemical poison to collect over 70Kg of Mahseer from a small stretch of Girihole which is at the border of Hassan and Coorg districts. The effect of poisoning was such that fish and aquatic insects were seen dead up to a kilometre downstream from the spot where the poisoning actually happened. The DFO of Hassan division was promptly informed and he promised to take strict action against the offenders. Subsequently, a couple of arrests were also made and patrol parties have been organized by the Forest Dept to keep a strict vigil. Outreach activities to educate the local communities on the impacts of chemical poisoning are also planned in association with local activist groups. 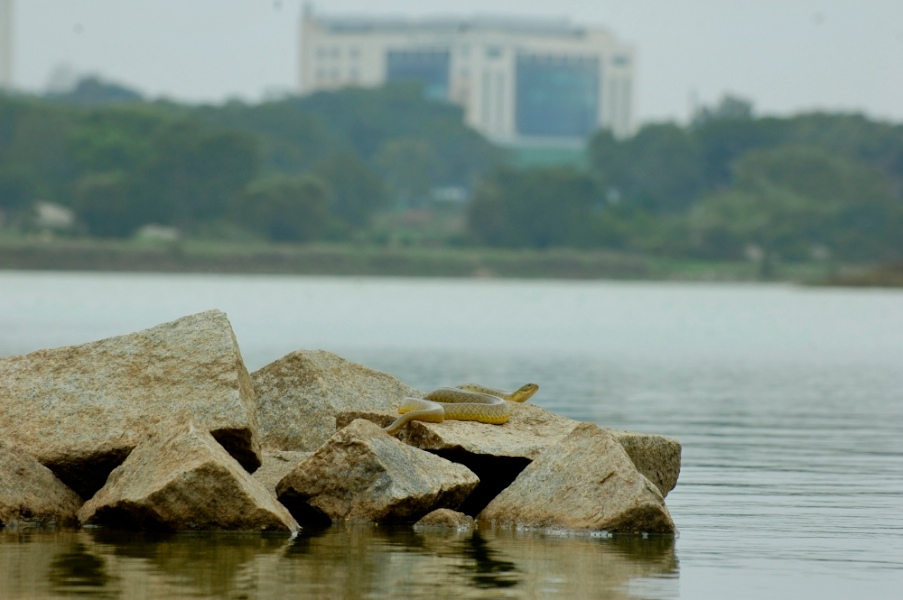