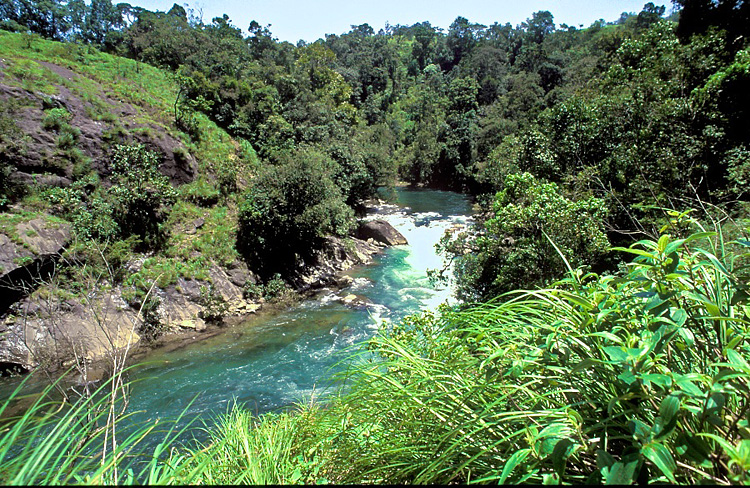 Shekar Dattatri
A remarkable people’s movement stopped a hydroelectric project across the Kunthipuzha River and saved a pristine evergreen forest in Kerala.
The Kunthipuzha river

Shekar Dattatri
A remarkable people’s movement stopped a hydroelectric project across the Kunthipuzha River and saved a pristine evergreen forest in Kerala.

Long before the Internet era, a remarkable people’s movement saved a pristine moist evergreen forest in Kerala’s Palakkad District from being destroyed by a hydroelectric project. The battle for the now famous Silent Valley raged for over ten years and involved thousands of people who did not even live in the vicinity of the area that was to be destroyed. Although the campaign did not have any centralized planning, it was highly effective. The sustained pressure exerted on the government by citizens using every possible means available at the time – letters to the editors of newspapers, seminars, widespread awareness programmes, and finally petitions and appeals in court and other high offices – proved ultimately successful. In 1986 Silent Valley was declared a National Park, a striking testimony to the power of peoples’ action. The lessons from this inspiring and hard-fought campaign are still relevant today. Here is a gist drawn from an article by the poet Sugatha Kumari in ‘Silent Valley – Whispers of Reason’.

1970: the Kerala State Electricity Board (KSEB) proposes a hydroelectric dam across the Kunthipuzha River that runs through Silent Valley, that will submerge 8.3 sq km of untouched moist evergreen forest.

Arguments it makes for the Silent Valley Hydroelectric Project (SVPH):

1971 – 72: Steven Green, a scientist from the New York Zoological Society, conducts studies on primates, especially the lion-tailed macaque in Silent Valley. Green expresses concerns about the possible threats to the rare macaque from the project. Around the same time, herpetologist Rom Whitaker explores Silent Valley to study the snakes of the region. He writes a letter to the Bombay Natural History Society about the need to conserve the Valley. Reports like these alert other naturalists.

February 1973: The Planning Commission approves the project at a cost of about Rs 25 crores. However, due to lack of sufficient funds, implementation is delayed.

Protests begin to mount against the project.

October 1976: National Committee on Environment Planning and Coordination (NCEPC) sets up a task force, chaired by Zafar Futehally, to study the ecological problems that could be precipitated by the project. Work on the project is suspended pending the task force’s impact analysis. Task Force recommends that project be scrapped. However it provides a loophole that stipulates that, if abandoning the project is not possible, a series of safeguards should be implemented. Unsurprisingly, the Kerala government opts to proceed with the project by promising to implement all safeguards. State argues that the area submerged by the dam is only 1022 hectares, of which 150 ha is grasslands. Also argues that only 10 percent of the ecosystem will be damaged, while ecological safeguards will protect the rest.

However, several NGOs strongly oppose the project and urge the government to abandon it. Conservationists argue that:

1977: Sathish Chandran Nair visits Silent Valley. With missionary zeal he starts a movement to create awareness in academic circles through talks and slide shows. V.S. Vijayan of the Kerala Forest Research Institute does a study on the impact of hydroelectric projects on the environment, and writes to the authorities not to begin the project till his report is submitted. He is admonished and his report is suppressed.

The message of the conservationists is taken to villages and cities all over Kerala. S Prabhakaran Nair tours the villages of north Malabar; Prof. John Jacob trains young nature lovers. Soon Nature Clubs spring up all over the state.

Undeterred, the state government plunges ahead with the project.

The result is that the outcry against the Silent Valley Hydroelectric Project – which started as a localized movement through individual and small group protests – goes national and international.

The General Assembly of the IUCN urges the Government to conserve the undisturbed forest area. Many eminent people, including conservationists and corporate and political leaders, write to the Central Government requesting that no sanction be given to the project. These include Salim Ali, Madhav Gadgil, CV Radhakrishnan, MS Swaminathan, Subramaniam Swamy, Sitaram Kesari, Piloo Modi and Krishna Kant. Salim Ali writes that the project is ‘shortsighted’ and has ‘limited objectives’. Institutions like the BNHS and Geological Survey of India ask that the area be declared a Natural Bioreserve.

However, Prime Minister Morarji Desai rejects all the appeals and recommends that the proposal begin with no delay.

August 1979: N.V. Krishna Warrier of the Prakriti Samrakshana Samiti, Prof. Joseph John, and P. Gopalakrishnan Nair, an advocate, file a petition and get a stay order from the High Court of Kerala, stopping work on the project.

Soon after, the Silent Valley Samrakshana Samiti and Kerala Sastra Sahitya Parishad start awareness campaigns with vigour. They hold protest meetings, rallies and debates all over the state, turning the campaign into a mass people’s movement.
Famous writers from Kerala join the movement and contribute their skills: poems, plays, stories and articles, to convey the message to the ordinary citizen.

Meanwhile, at the Centre, Morarji Desai is replaced by Charan Singh as PM. He institutes a Central Committee to re-investigate the issue, headed by M.S. Swaminathan, much to the chagrin of the Chief Minister of Kerala. In a move reeking of money-backed counter-propaganda, the State Government sets up its own panel of ‘environmentalists’ and scientists who support the government’s views.

January 1980: the High Court rejects the writ plea, saying that it is not for the courts to go into the merits of scientific arguments and that it is “satisfied that the matters have received attention before the State decided to launch the project”. Work on the project begins again in earnest.

Meanwhile, a small group of campaigners meet the Kerala Governor and request her to issue a stay order against continuing work on the project until the Committee set up by the Centre gives its report. She agrees, and work is halted once again. On the streets, the awareness campaigns continue.

The role of the media: In the media too, the fight for Silent Valley marks a distinct curve. The leading Malayalam newspapers first carry positive columns on the hydroelectric project. By 1977, four years after the project is approved and environmentalists begin their opposition to it, the newspapers still largely carry only news of the government’s efforts to start the project. Editorial opinion, on the rare occasions that it is expressed, strongly support the project and ‘development’. Some publications even take potshots at the lion-tailed macaque, which has become a symbol of the wildlife that the environmentalists are trying to protect in Silent Valley.

The Express, a local daily, is an exception. It carries editorials that constitute a deliberate and strong tilt towards saving Silent Valley; it also carries a feature with a measured argument explaining the importance of rainforests in layman’s terms.

In 1979, a slight shift in newspaper reportage is noticeable. Along with support for the project, some newspapers raise concern for the ecological consequences of destroying the rainforest. Malayalam Manorama, a popular magazine, although inclined to view the project favourably, opens up its letters and features columns to environmental opinions.

At first, few national newspapers consider the environment a particularly interesting subject, and the Silent Valley battles that are raging in Kerala may well be in another continent. The political push and shove that the project endures eventually gets the newspapers to cover the opposition to the project. The Indian Express, with its many southern editions, is ideally placed to pick up the issue. It’s Kochi editions regularly feature Silent Valley and its concerns – even lambasting the Morarji Desai government for approving the project.

The Hindu regularly features editorials on the subject. In August 1979, the paper carries a full-page report on the flora and fauna of Silent Valley. The letters section of the paper attracts several eminent people, among them Rom Whitaker, M.K. Prasad, Madhav Gadgil. The eminent naturalist, M. Krishnan writes, “In my lifetime I have seen many fine wildlife habitats demolished for hydel projects. Silent Valley is more important than them all – the last authentic sizeable evergreen forests left.”

More political twists and turns: Meanwhile, in Delhi, Charan Singh’s term as Prime Minister is over in a short six months. He is replaced by Indira Gandhi. Luckily for the conservation movement, she takes an active personal interest in the Silent Valley project, as national and international pressure mounts.

However – when the fine print is read – it is learned that the area under the hydroelectric project is not covered under the protected area! When the people become aware of this ‘little detail’, hundreds of protest telegrams are sent to the Central Government. More pressure is heaped on the government by NGOs, reputed scientists and intellectuals, and ordinary citizens.

June 1983: the Centre re-examines the issue through a commission chaired by Prof. M.G.K. Menon.

November 1983: the Silent Valley Hydroelectric Project is called off.

For more on Silent Valley and its present status, see: http://en.wikipedia.org/wiki/Silent_Valley_National_Park

Plastic and the Pup — Red Fox with a Bottle