Ananda Kumar
Elephants in tea plantation in the Valparai plateau 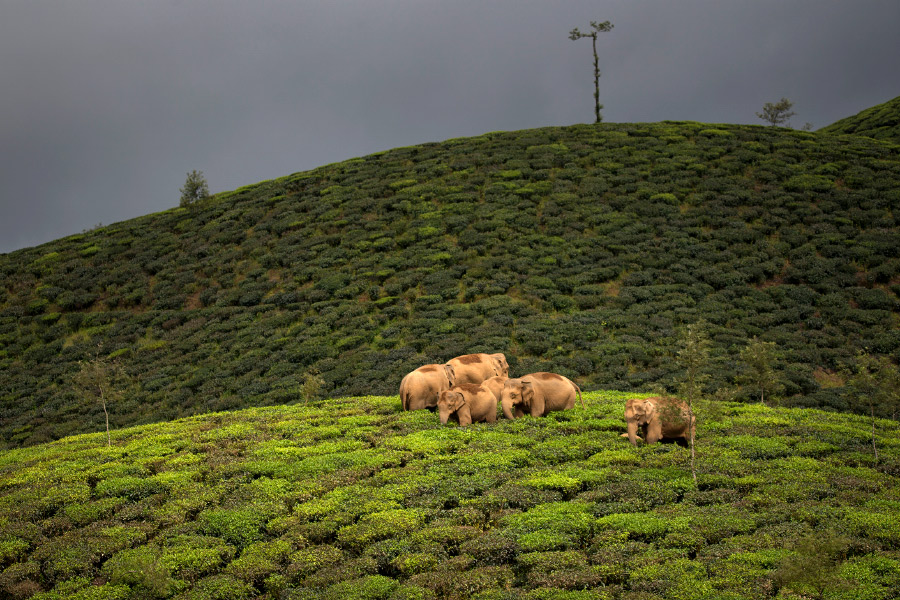 Ganesh Raghunathan
Lack of information about elephant presence and movement through plantations was the major reason for loss of human life.
Elephant alert light in a plantation labour colony 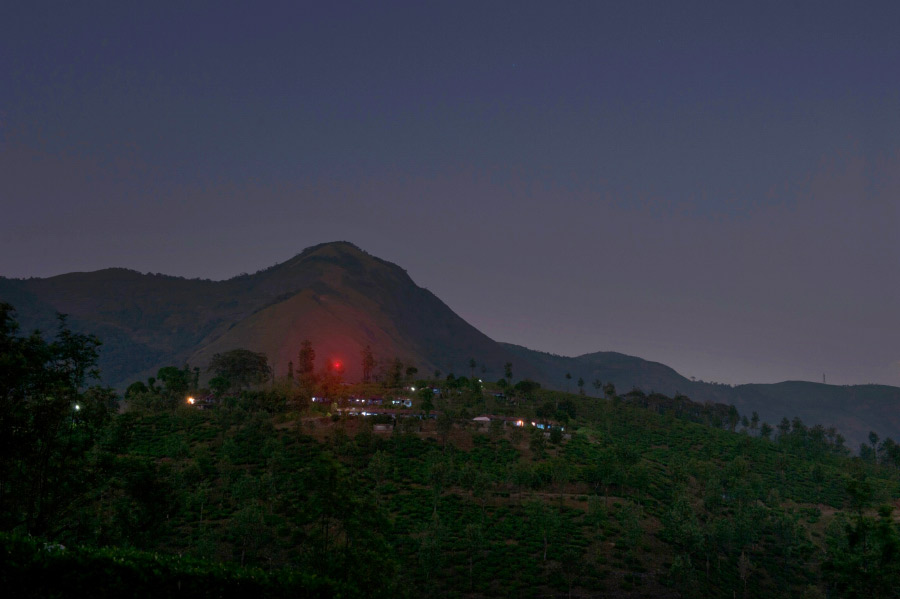 Kalyan Varma
Cellphone operable flashing LED lights on tall poles and are located in strategic places that are visible from up to 1km away.

Understanding human-elephant interactions is critical for conservation of elephants outside Protected Areas. One of the intriguing questions is how can a person weighing 50kg and a 5000kg animal coexist with no barrier between them?

Conflict incidents frequently lead to use of reactive measures such as chasing elephants, capture and translocation, or retaliatory persecution, but these often fail to resolve conflicts on a sustained basis, empower communities to implement solutions, or help conservation of elephants. Long-term research on behavioural and ecological aspects and human-elephant interactions is needed to better understand conflicts and identify appropriate solutions.

Our long-term work over a decade from the Valparai plateau, a landscape matrix of tea, coffee, and rainforest fragments in the Anamalai hills, Tamil Nadu to showcase where elephants and people could maintain permeable spaces with simple but participative measures. By tackling elephant herds and individuals to understand their movement patterns, preferred habitats, spatial and temporal conflict occurrence enabled us to identify and implement targeted mitigation efforts. The major conflict concerns were the safety of human life and damage to buildings where food grains are stored. Our studies revealed that lack of information about elephant presence and movement through plantations was the major reason for loss of human life, suggesting a need for early intimation about elephants. We have initiated early warning systems in a phased manner by using local TV network as a source of intimating people about elephant locations and warn them to avoid direct encounters. This had resulted in decline in human fatal incidents over years with no incidences of human death noticed for 32 month period between 2004 – 2007. This has prompted us to implement systematic advanced intimation systems with a team of dedicated conservation scientists in the following ways.

Since 2011, the Nature Conservation Foundation (NCF) in collaboration and partnership with Elephant Family, Whitley Fund for Nature, Rufford Foundation, PBNF, and TamilNadu State Forest Department, and cooperation from the Anamalai Plantation Companies has implemented early warning systems to develop an effective Elephant Information Network (EIN) in the Valparai region. The early warning systems are simple, adoptive, and participative which helped increase tolerance levels of people towards elephants while imparting sense of responsibility in the management of human–elephant conflict. This is also followed by Forest Department new initiatives in the following ways:

By reviewing these measures and responses from stakeholders, we have identified certain gaps in our measures which would require strengthening and expanding early warning systems with new initiatives as described below.

Based on these experiences and knowledge, we have recently expanded our programme to other critical landscapes which would represent most part of human-elephant interaction landscapes. These include forest-agriculture hard-edge interface of Sathyamangalam in Tamil Nadu and a complex coffee-paddy-forest mosaic of Hassan region in Karnataka to understand human-elephant interaction dynamics to explore the possibility of finding ways to address human-elephant conflict. Our experience indicates that a long-term science-based approach with sustained participation by local communities can help in positive conflict management, deliver direct benefits to problem locations, and increase people’s tolerance of elephants. It also suggests that a shift from the conventional, reactive ‘problem elephant’ approaches to a pro-active ‘problem location’ approach may be more effective to promote coexistence and elephant conservation in modified landscapes.

Systematic implementation of early warning systems resulted in gradual decline in human fatalities during the past three years with no incident of death or injury noticed in 2013. Average number of human deaths reduced from three persons per year between 1994 – 2002 (prior to our research) to 1 person year between 2003 – 2016. And also there may have been many people who would have taken adequate precautions due to alerts and avoided direct encounters with elephants.

There is a need to strengthen sensitization of people through awareness programmes to make these efforts sustainable and further reduction in conflict incidents in future. Positive results were also visible in terms of reduction in property damage incidents by elephants where incidences of property damage declined by more than 50% over years. We believe that these systems may be helpful in other similar landscapes such as Gudulur region in Tamil Nadu, some parts of West Bengal and Assam in which high incidences of loss of human life and injuries have been witnessed.