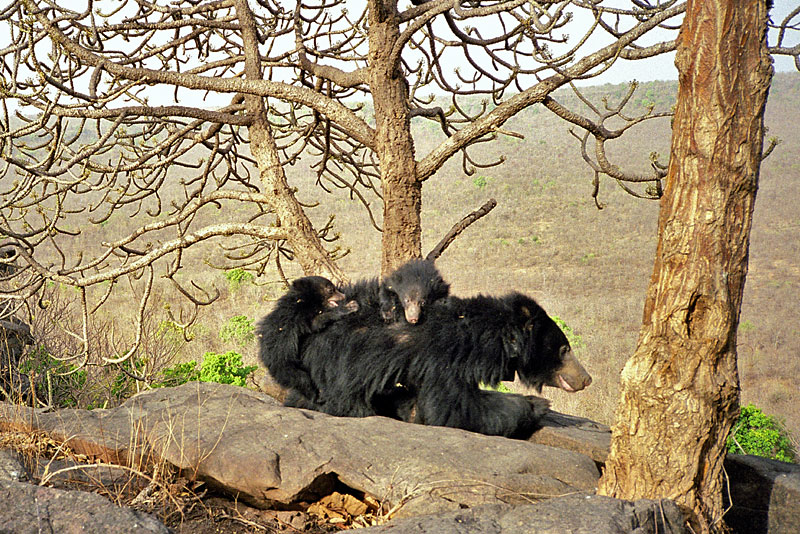 CI: What else do they eat?

While ants and termites form their year-round staple, they also feed a lot on fleshy fruits, which are available seasonally. In Panna, fruits contributed 56%, ants 29%, and termites 10% to the annual diet, in terms of ingested biomass. As with the seasonal variability, the diet also varies from place to place depending on the availability of various insects and fruits.

CI: Tell us about their breeding behavior

Mating generally takes place between May and July and the cubs are born between November and January. However, there have been reports of cubs being born at other times of the year, especially in Sri Lanka.

Yes, they do feed on honey commonly. The energy rich sugar in honey and the fat rich larvae and other early growth stages of bees housed in the honeycombs are important nutritional sources for sloth bears. Further, the availability of honeycombs over a large part of the year when other seasonal food can get scarce is an advantage.

CI: Why do they have such long claws?

The front claws of sloth bears are long (up to 7 cm) and curved. They are an adaptation for digging the earth to reach ant and termite nests underground, or inside mounds. They sometimes dug as deep as 1.5 m in Panna NP to reach underground ant colonies. The claws on the hind legs are shorter (about 3 cm).

CI: What are their peak activity times?

This may vary from place to place, depending on heat conditions and human disturbance. In the generally hot and dry forests of central India, the peak activity times were around dawn and dusk and in the nighttime, whereas they rested in dens during the day.

CI: In areas without caves where do sloth bears give birth?

There have been some observations recorded in the literature of sloth bears giving birth in holes dug along river/stream banks, and in dense shrub thickets. They could also use crevices in big boulders along dry riverbeds, hollows in large tree trunks, fallen logs and even storm-water culverts. I am doubtful if they will use disused buildings for this purpose, but cannot rule out the possibility if there is an appropriate structure available.

CI: Why do sloth bears carry their cubs on their backs and is this common among all bear species?

Cubs are frequently carried on their mothers’ backs from the time they leave the den until they are about six months of age. Carrying cubs by the mother seems to be a defence against attacks by predators such as tigers, leopards or other bears. This behaviour is commonly seen only in the sloth bear and is a trait shared with other anteaters.

CI: What are the major direct threats to sloth bears – natural and man-made?

Natural threats in their wild habitats are predators such as the tiger and leopard. Cubs and sub-adults could sometimes face threats from adult male bears. Severity of threats from diseases is generally unknown.

Humans are a direct threat as they can gang up and kill bears even with rudimentary weapons, or set traps, which could capture or kill them. Indirect human induced mortality factors include speeding vehicles, fences with deadly electric supply, poisoned waterholes, etc.

CI: What do you think of the Daroji bear sanctuary in Karnataka?

Daroji is an interesting place. It is unique in the sense that it is where direct management interventions such as habitat manipulation, supplemental feeding, and protection measures are made with a specific focus on the sloth bears. However, what kind of impacts these interventions have on the sloth bear population is largely unknown. Further, there are several questions that arise, including whether these interventions are justified and whether they are based on prior research or merely well intentioned ad hoc actions. However, on the positive side, if not for this special focus on sloth bears, Daroji may have been lost to mining interests in the area. Overall, nitpicking aside, I think it is a laudable effort.

CI: What is the distribution of the sloth bear in India?

India is home to more than 80% of the world population of sloth bears. Within the country it is the most widely distributed bear species. It is found in forested areas across India, from the foothills of the Himalaya to the southern tip of the Western Ghats; in the west from the Aravalli hill range in Rajasthan to the east up to the terai and duars of North Bengal and Assam. However, its northeastern limit and its current distribution in the northeastern states are unclear.

CI: Where else in the world are sloth bears found?

Sloth bears are also found in Nepal, Sri Lanka and perhaps in the low-lying areas of Bhutan. They occurred in Bangladesh in the past but are probably extinct now.

CI: What is the estimate for the world population of sloth bears?

My estimate for the species, based on presently available information, is 6,000 to 11,000 in India, and another 1,000 to 2,000 in other countries where it is found – Nepal, Sri Lanka and Bhutan. So, the total world population could be anything between 7,000 and 13,000. It should be noted that this is a rough estimate, although it may be the best that is available presently.

CI: What is the status of sloth bears in India?

Overall, the sloth bear is threatened, although it appears to be secure in some parts of its distributional range. Over the past century, the sloth bear’s range has shrunk considerably and its populations have declined and have become fragmented, threatening its overall survival. Some isolated populations have even become locally extinct. Given that secure habitat of high quality for sloth bears is estimated to be only about 10% of the forest area in India, its total population size may be as low as 6,000, not all the regional populations are safe, and even the stronghold areas of the Western Ghats and central Indian forests are threatened by fragmentation and degradation, the sloth bear in India should be considered as a threatened species.

CI: What are the main threats?

The greatest threat to sloth bear survival in India is the loss of their forest habitat, especially outside Protected Areas. Other factors include:

CI: What other studies have been done on sloth bears?

The first intensive study on sloth bears was done in Chitwan National Park in Nepal in the mid-1990s by Joshi and others. This was preceded by some short-term studies on certain aspects of the sloth bear ecology in Nepal and India. After my intensive research on the behavioural ecology of sloth bears in central India, there has been a study in the Bilaspur region in eastern central India by Bargali and others with a focus on bear attacks on humans in that high conflict region, and another one in southern Sri Lanka by Ratnayeke. There have been many other short-term studies, particularly on food habits of sloth bears in southern and central India and Nepal by various authors ranging from George Schaller, Laurie & Seidensticker, Sunquist, Johnsingh, Baskaran, and others. There have also been observations and reports focused on bear conflict with humans from southern and central India by various researchers.

CI: Tell us about the other bear species in India. 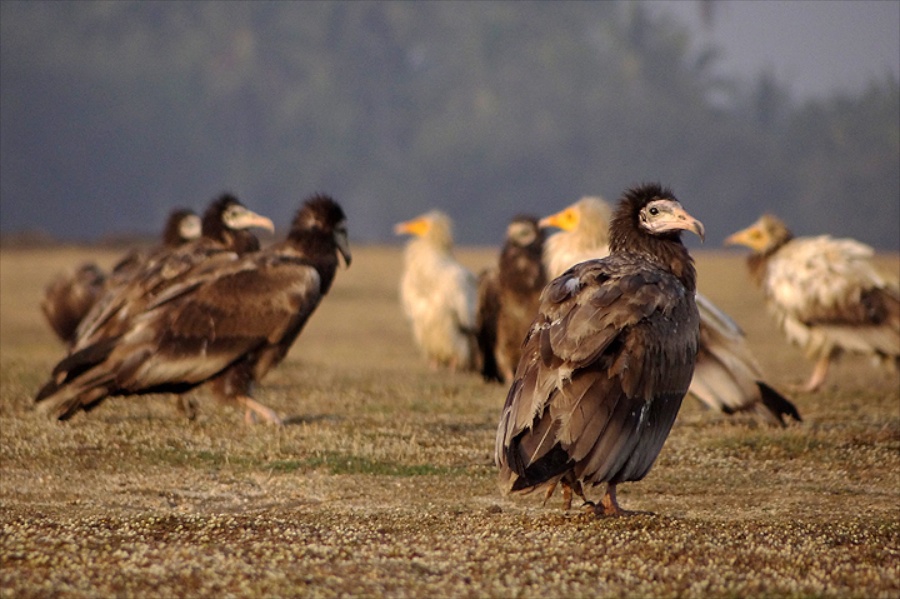