Sailaja Nayak, Sunny Shah & Jimmy Borah | Journal of Threatened Taxa
The Rusty-spotted Cat is listed as a Schedule I species under the WPA, 1972. 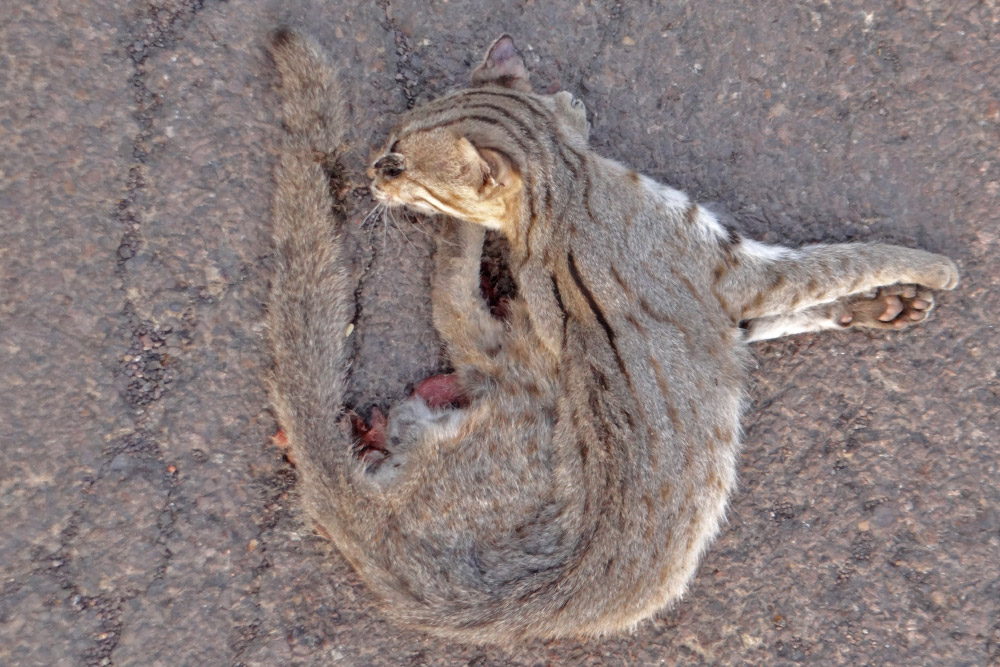 Sailaja Nayak
Though the cat ranges from Tamil Nadu in the south to Jammu & Kashmir in north, its distribution is yet to be documented clearly.

The Rusty-spotted Cat (Prionailurus rubiginosus) is the world’s smallest cat, found only in India, Nepal and Sri Lanka. It occurs in moist and dry deciduous forest types as well as in scrub and grassland. Rusty-spotted cats prefer dense vegetation and rocky areas (Worah 1991; Patel 2006) but have been found amidst agricultural areas and human settlements (Nowell & Jackson 1996; Mukherjee 1998; Kettle & Watson 2004). The Rusty-spotted Cat is listed as a Schedule I species under the Wildlife (Protection) Act, 1972 of India and is classified as ‘Near Threatened’ under the IUCN Red List of Threatened Species. Past studies and historic records have shown that the Rusty-spotted Cat ranges from Tamil Nadu in the south to Jammu & Kashmir in north, through Madhya Pradesh in central India to Gujarat in the west and Odisha in the east (Chakraborty 1978; Digveerendrasinh 1995; Patel 2006; Acharjyo et al. 1997; Mali et al. 2015). Though it has been recorded from most parts of India, the distribution is yet to be documented clearly (Mukherjee et al. 2016). To date, the Sariska Tiger Reserve held the northernmost confirmed record of the cat (Mukherjee 1998) from Rajasthan. Down further south, there are records of Rusty-spotted Cats from Ranthambhore Tiger Reserve and Udaipur (Dharmendra Khandal in litt. 2013; Bhatnagar et al. 2000). We report a recent record of this species, based on a roadkill and photographic evidence, from the Ramgarh-Vishdhari Wildlife Sanctuary, just south of the Ranthambhore Tiger Reserve, in Rajasthan, India.

We photographed a carcass of a Rusty-spotted Cat during a roadkill survey on 22 June 2014 at 06:31hr at 25031’6.5” & 75053’14.6”E (See exact location). This location was on our survey route to Lakheri-Khatkad-Bundi, on State Highway 29, on the boundary of the Ramgarh-Vishdhari Wildlife Sanctuary. We assumed that the roadkill incident took place the night before we found the carcass. The cat’s coat was brownish-grey and had rusty spots arranged longitudinally over the body except on the forehead, which had four dorsal dark brown stripes running up to the shoulder. The cat’s eyes were large and round. While the legs were short and dark brown in color, the tail was long, uniformly colored with a black tip. The site of the kill was located on a gentle slope, surrounded by densely covered scrub land (mainly Prosopis juliflora) on both sides of the road and human habitations nearby. The cat looked like an adult. This incidence along with aforementioned records from Ranthambhore possibly indicates the presence of a breeding population in this region. We assume that the species might be using different forest patches connected with each other as “stepping-stone” corridors from Ranthambhore Tiger Reserve through the Ramgarh-Vishdhari Wildlife Sanctuary via Bundi Territorial Forest to the Mukundra Hills Tiger Reserve in Kota and the Kumbalgarh Sanctuary of Udaipur.

Over the past decade, rusty-spotted cats have potentially gone through severe population declines because of habitat alterations, road kills and possible hybridization with domestic cats (van Gruisen & Sinclair 1992; Menon 2003; Khan & Mukherjee 2008). There are previous reports of these cats being found dead near roads and human settlements (Tehsin 1994; Digveerendrasinh 1995; Dubey 1999), which indicate that vast road networks are a major threat to their survival. The expansion of a cement factory in Lakheri along the road SH29 in the near future will likely lead to an increase in traffic, especially in the after hours that might result in more such roadkill incidences. There is very little information available about the Rusty-spotted Cat’s ecology, and this could be attributed to its elusive and nocturnal behavior and activity. There is a need to develop management plans that look into and beyond protected areas since large populations of this small cat could be surviving outside protected areas (Patel 2011). There is also a need for monitoring studies on their status, population density, ecology, connectivity, and threats. Such studies can help further investigate their distribution and develop strategies for conservation of the species regardless of its presence in various land regimes.


All three authors are from WWF-India.