Trade of Endangered Caracals Busted in Mirzapur, UP 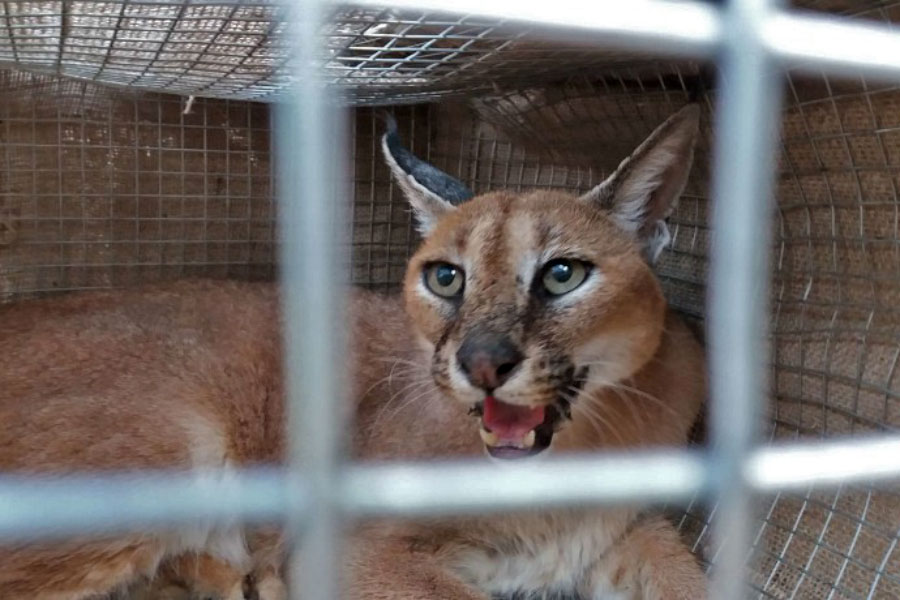 Image © Amar Ujala
The six animals were transported in cages covered with gunny bags
The 6th cat turned out to be a Serval, an African cat. 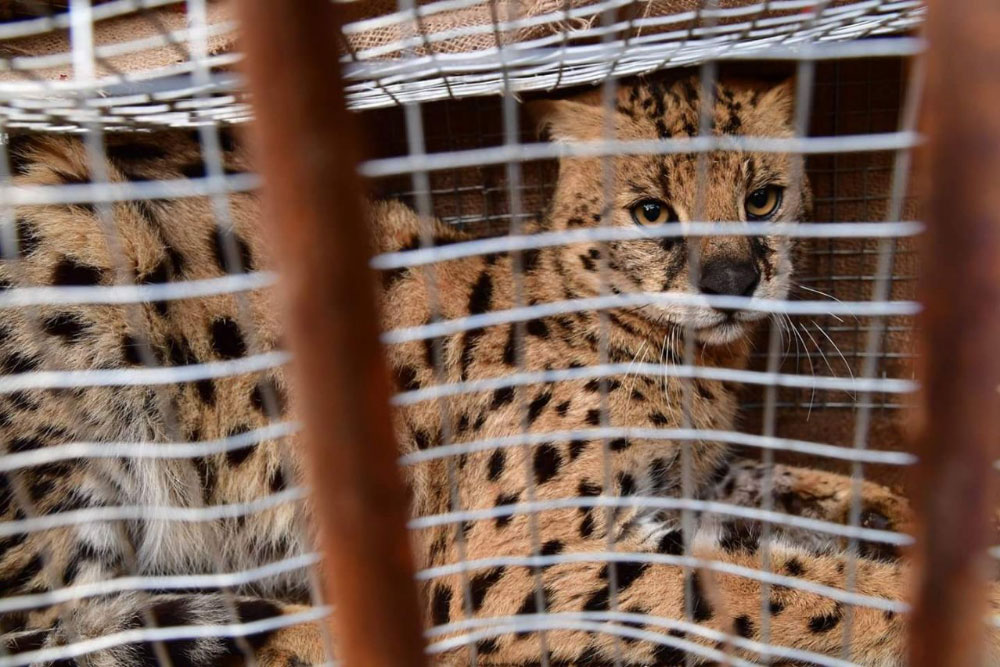 OP Singh, DFO, Kaimur Wildlife Division, Mirzapur
In total, 5 caracals and a serval have been rescued

The captured animals must be reintroduced into the wild at the earliest after ascertaining their origin, and a thorough investigation should be undertaken to destroy this illegal wildlife crime racket and culprits punished as per law.

The elusive caracal (Caracal caracal), arguably the rarest cat in India, is one of the least known mid-sized carnivores in India, in terms of its ecology, distribution or behaviour. There are few people in India who can claim to have seen one in the wild, and this includes forest officers and wildlife biologists who have spent years working in known caracal habitats. So rare is this animal that a single sighting is major news across the wildlife fraternity as well as in the media. Given this background, we were stunned when news trickled in yesterday that an unbelievable five caracals were recovered in Mirzapur in eastern Uttar Pradesh.

The story was first broken by Vindhyan Ecology and Natural History Foundation, popularly known as Vindhya Bachao, an environmental NGO working in the Mirzapur landscape and at the forefront of wildlife conservation of this little-known region that is afflicted by rampant mining, encroachments and the presence of various power projects.

Sometime on the evening of the 8th January 2017, an SUV was stopped for a routine-check by the police near Bharuhna village, a few kilometers from Mirzapur town, on NH-35 in light of the upcoming elections in the state. When the police insisted that the occupants show them the goods they were transporting, the visibly nervous occupants of the vehicle tried fleeing. While two managed to escape, one individual by the name of Abdul Arif, a native of Hyderabad, was caught. What was recovered from the SUV was astounding — six wild cats in six small cages, covered with gunny bags. The police were at a complete loss in identifying the cats; some believed the animals to be lion cubs, others thought they were exotic pumas! The forest department was called in and unfortunately even they were equally baffled. With the information provided by the forest department, every local media house in the region reported (and continues to do so) the recovered animals as ‘jungle cats’ and ‘a leopard cub’! As this confusion continued, a local journalist took images of one of these wild cats and sent them to us. We were shocked beyond belief when we saw the pictures and found them to be of caracals! We were informed that out of the 6 cats recovered, five cats looked the same (caracals) while one “looked like a small leopard”, which later was reported to be a leopard-cat.

Update/Addendum: Last evening (11th January 2017) we accessed the first photos of what we had been told was a leopard cat, and to our amazement realised that it was infact a Serval, an African medium-sized cat. This presence of an African cat in the seized consignment further complicates this entire episode, and now the geographic origin of the 5 Caracals is being investigated (given Caracals are also found in Africa).

This seizure raises important questions — where were they captured from, what was their final destination, what smuggling route do they take, how rampant is this trade, and what is the purpose of this trade? The emergence of new information about an African Serval raises doubts over how an exotic wild cat species was smuggled into India, or if they are being domestically bred illegally to cater to a domestic (and possibly international) exotic pets market.

The distribution of caracals in India is little known. Out of the few studied habitats, they have been most often reported from parts of Rajasthan and the drier parts of Madhya Pradesh. The official version presented by the department, as reported in the media, is that the animals were brought from Bihar and were destined for Hyderabad. However, sources on the ground, some of whom were involved in the raid, claim that the animals were being brought from Varanasi. Moreover, despite the recent update on the identity of one of the cats being a Serval, some sources on the ground still believe that the caracals, however, could be sourced from around Mirzapur after being been trapped by one (or more) of the many local poaching gangs active in the area and were now being smuggled out.

The forest department officials and other concerned agencies are investigating all possibilities regarding the origin of these Caracals. Caracals are not unknown to Mirzapur and they, along with the now extinct Indian cheetah, have been historically reported in the Mirzapur region. A specific note from 10th Aug, 1919 published by G.O. Allen published in JBNHS serves as a precious record of caracals and the extinct cheetah in the region. Thus caracals are not unknown to this part of the country including from similar neighbouring landscapes like Bundelkhand, Jharkhand, Chhotangapur and Sambalpur in Orissa. A lot of the habitat that falls in the Mirzapur division is ideal caracal habitat — scrub and open dry forests — which, coupled with the secretive nature of this cat, makes us believe that caracals could be surviving here.

These territorial forests are also home to other flagship (schedule 1 species) such as leopards and sloth bears, the latter being fairly common.  Those interested may read more about the history of caracals in eastern India in this article in Zoo’s Print Magazine.

As for the fate of the captured cats, the future course of action is being charted out. The department is now planning on temporarily shifting the animals to Lucknow zoo (based on an interim High Court order) while they determine the origin of this contraband — a critical piece of information that will determine if the caracals will be released at all, and the location of their release. Pending the completion of investigation, the animals should be kept in a large, open enclosure rather than a typical zoo cage.

Also, should the investigations regarding the origin of these caracals conclude them fit for release, then for post-release monitoring, they should be fitted with GPS-collars so that their movement and rehabilitation can be tracked. Such telemetry studies from other carnivores in India, such as leopards and jungle cats, is pointing towards a remarkable resilience and adaptation to human-modified landscapes. It’s possible that the caracal may also be one of these species, or it may be more similar to desert and Indian foxes in being a hyper-habitat specialist. Only detailed ecological studies will allow us to determine this.

Finally, and perhaps most importantly, we strongly recommend a thorough and independent investigation into this matter to unearth the entire roots and links of this smuggling racket.


Debadityo is an environmental activist / founder of Vindhya Bachao Abhiyan and is closely associated with conservation issues of Mirzapur region. Raza is a Jharkhand-based conservationist and a keen student of India’s wildlife history. 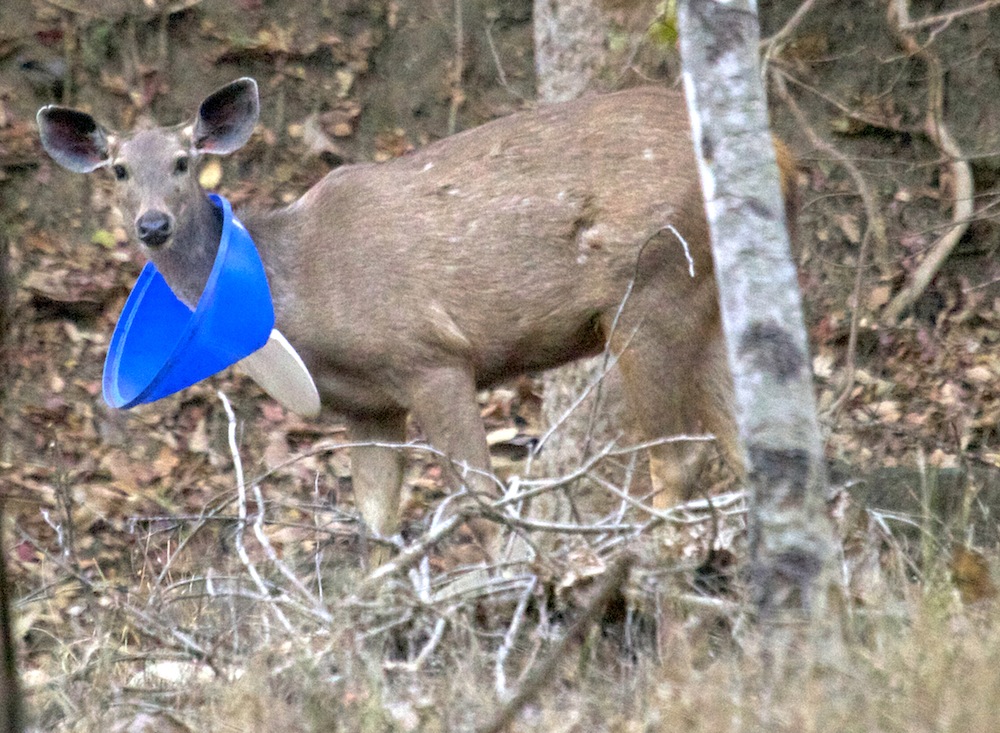