The Last of Kashmir’s Royal Stags 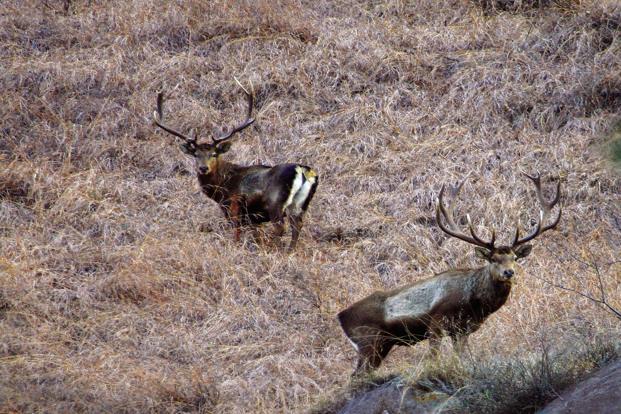 Ananda Banerjee
The govt claims there are 218 of them while wildlife experts insist the real number is likely to be in the double digits.

On 16 March, Wildlife Institute of India scientist Parag Nigam tranquilized and radio-collared a hangul in the Dachigam National Park on the outskirts of Srinagar.

The enigmatic Kashmir stag has never been radio-collared before, and its nervous disposition doesn’t make it the ideal subject for tranquilization. Indeed, a plan to collar three more stags has been deferred to November, with the animals moving to the upper reaches of the park with the onset of summer. The Hindu reported on 14 April on the radio collaring of the hangul and how it was achieved.

In early March, this writer was in Dachigam to try and catch a glimpse of the last remaining hangul, the state animal of Jammu and Kashmir. The government claims there are 218 of them, but the number has hovered in the 200s since 2004 and wildlife experts insist the real number is likely to be in the double digits.

“There is no certainty, only adventure,” says Nazir Malik, a 50-year-old naturalist, quoting Italian psychiatrist Roberto Assagioli, when asked about the chances of seeing the hangul. Adventure it definitely is, with bear and leopard scats marking the narrow mountain track that climbs the pine forest.

Malik is a self-taught naturalist who ran away from school to roam the forest that he has known since he was five years old. Dachigam is definitely roam-worthy. It covers an area of 141 sq. km and is located in the foothills of the Zabarwan range in the greater Himalayas. And it is also the last bastion of the hangul, a subspecies of the European red deer native to India. Dachigam means 10 villages, which were relocated at the time of the formation of the park. The park area is divided into upper and lower Dachigam by a 15km corridor of temperate forest.

The male hangul is known for its magnificent antlers that can have between nine and 16 branches. It is an extremely shy deer with a dark brown coat and white rump found either alone or in small groups. Once found widely in Kashmir, its numbers have dwindled to around 200 from 2,000 in the 1940s due to poaching and the destruction of habitat. It is termed “critically endangered” by the International Union for Conservation of Nature (IUCN) Red List and in Schedule I of the Wildlife Protection Act in India.

In order to monitor the hangul population, a collaborative project called, “Long term conservation of Hangul: Studying Movement Patterns of Hangul using Satellite Telemetry in Dachigam National Park,” was started in March 2012 by the Sher-e-Kashmir University of Agricultural Sciences and Technology (SKUAST), the Wildlife Institute of India (WII) and the wildlife department of the Jammu and Kashmir government.

There is also a plan to breed the deer in captivity and release them in the wild. The central government has sanctioned Rs.22 crore—around Rs.1.5 crore has been already released to the state—under the species recovery project for a captive breeding programme at Shikargarh Tral in upper Dachigam. And tourism has been banned inside the park because the animal is extremely sensitive to the presence of humans.

On that early March day, Mehraj Ud Din Shah, a young researcher at SKUAST, tries to attract the stag to designated oak patches with the lure of salt licks and green leafy vegetables. He shares his diary of sightings, which gives this writer hope as we continue to climb through the lower Dachigam valley. Malik is anxious. He doesn’t want a confrontation with the aggressive Himalayan black bear.

The hangul moves between upper and lower Dachigam in search of food. “Winter is spent on lower elevations below 2,000 metres in valleys and gorges while spring finds them moving up the mountain slopes in search of lush green grass that comes up after the snow melts. The deer spend the summer months at elevations between 2,700 metres and 3,600 metres and again return to lower elevations at the onset of winter,” says S.S. Negi, former director, Forest Research Institute (FRI).

The stags use lower Dachigam between September and April; the mating season starts in mid-September and ends a month later. By the end of April, after the fawning, they move to upper Dachigam to their summer grazing grounds.

Currently, these same grazing grounds are used by the Gujjars, Bakarwals and other shepherds who take their livestock to higher altitudes during summer.

“In the vast areas of Nageberan and Marser, thousands of sheep, goat, horses and cattle are grazed by local graziers, Gujjars from Kashmir as well as Bakarwals and Banyaris from Jammu. This has created potential competitors and persistent sources of disturbance for hangul during summers,” says a Wildlife Trust of India (WTI) report.

“Poaching by Gujjars, Bakarwals and other shepherds, who take their livestock to upper Dachigam during summer, is a major cause for the hangul’s decline. This is compounded in Dachigam by the large-scale biotic interference due to grazing by the state animal husbandry department owned cattle which use upper Dachigam as a grazing ground,” say conservation biologists M.M. Sofi and Riyaz Ahmed in the WTI report. The same text is quoted in an IUCN review note by Mir M. Mansoor, chief wildlife biologist and veterinarian, Jammu and Kashmir. According to Mansoor, the issue that requires urgent attention is the state-owned sheep-breeding farm occupying more than 10 sq. km of the park. The 3,000 or so sheep there are a major threat to the hangul. The sheep are taken to upper Dachigam in summer to the same grazing meadows required by the hangul.

Biologists also worry that an outbreak of disease among the sheep could travel to the hangul and wipe out the species. A forest official who didn’t want to be identified says there was one such outbreak that killed a few sheep before it was brought under control. Mint couldn’t independently verify this.

Conservationists and even some members of the state’s wildlife board, who spoke on condition of anonymity, say their efforts are being hindered. They allege that Gujjars, Bakarwals and other shepherds are allowed free rein inside the park under the patronage of Mian Altaf Ahmad, the state forest and environment minister, who is a Gujjar leader. He denies this is the case and adds that the shepherds can’t be pushed out of the park.

“The Gujjars are living near Dachigam for more than 60 years,” the minister said. “Because of militancy, their traditional pasture lands were blocked and they came inside upper Dachigam. I have requested them to leave the park because of the hangul and I have arranged for alternate pasture grounds. I can’t force them out, I am minister for just four years and they are living there for decades. The sheep farm is there for 60 years. I only initiated the process that the farm should be moved out of the national park.”

Conservationists however allege that every time forest officials have tried to restrict the movement of the graziers, the minister has intervened.

For instance, a wildlife warden, Imtiyaz Ahmad Lone, and a forest ranger, Shamsudin, were transferred in May-June last year. Conservationists say they were only trying to safeguard the fawning grounds.

“Gujjars have built semi-permanent dwellings in upper Dachigam all the way up to Marsar. There are reports that some of these are operating as small hotels,” adds Mansoor.

Three forest guards who were transferred at about the same time—Mehraj ud din Wani, Mohammad Shafi Mir and Mohammad Maqbool Malik—have managed to get the high court to stay the order. The minister said he had no role to play in the move against the three.

“I haven’t transferred anybody,” he said. “It’s not my job. Transfers are done by district wildlife officers. Some people are unhappy and blaming me.”

The conservationists say grazing is responsible for the declining number of stags.

On that early March day, Malik makes a sudden move and pushes this writer down. He points through the trees. Just about 50m up the trail are four magnificent hangul. The stag closest to us is a fine specimen, with a 13-point antler and a rich chocolate coat.

“Hangul comes from the word hang, a local name for a species of chestnut found in this forest, which the deer is fond of and which gives the deer its dark brown coat,” he says. We see five more stags as we traverse the valley.

Another One Bites the Dust — Pangolin Roadkill, Davangere, Karnataka