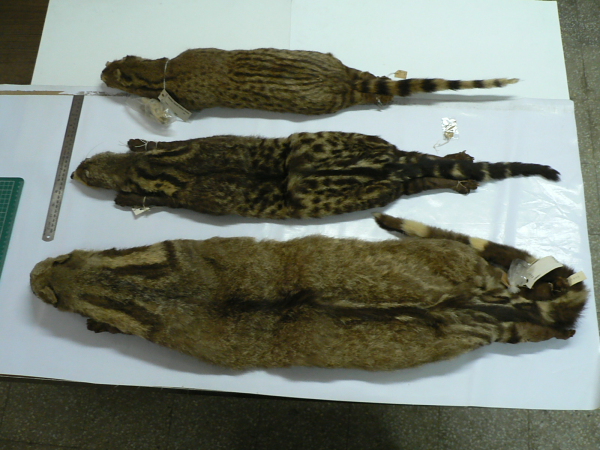 In the absence of observations of live animals, scientists only have scattered notes in the literature and about a dozen museum specimens labelled as Malabar civet to work with!

Have we really lost another mammal species from India? If not, what has become of the Malabar civet? Intrigued, Divya Mudappa sets out to look for the species in the Western Ghats along with NIAS researcher Nandini, only to find the Indian civet. The Malabar civet, she says, is rare in museum collections too, and even a bad photograph of a wild Malabar civet would be better than none at all.

The forests of the Western Ghats are believed to house an animal so rare that it has eluded everyone who has gone looking for it. This mysterious animal, active only by night and about as big as a village dog but with shorter legs and a banded tail, is the Malabar civet. Among small carnivorous mammals of the world, it has earned the unenviable status of being critically endangered. It has never been sighted with certainty and photographed in the wild. Stray sighting reports have come from here and there, with little more than the large size of the animal used to affirm that it was indeed the Malabar civet. The species seemed to be on the brink of extinction. In the late 1980s, the recovery of a few skins from a small town in Kerala rekindled hope of its occurrence. But it also deepened the mystery.

Until recently, few people have known of the existence or distinguishing characters of the Malabar civet. Among the civets seen in the Western Ghats, the small Indian civet is somewhat similar in appearance to the Malabar civet due to its banded tail and black-and-white markings, but is smaller in size. Both these civet species are mainly ground-dwelling in habit.

On the lookout for the rare civet

Two decades ago, when I first began fieldwork in the forests of the Anamalai hills, I was not aware of the existence of the Malabar civet. One night, I saw a ‘large’ civet very close to my camp in the forest. It seemed larger than any civet I had seen before or the small Indian civet I saw a little while later. Going through the only field guide to Indian animals available at that time, I tentatively fixed a name to it—Malabar civet—a species that the book only mentioned in passing. It was only later, while discussing it with a senior researcher from the Wildlife Institute of India, that I realised that this was such a rarity.

Since then, my research has led me on to camera-trap surveys, to study civets and mongooses, and travel along the Western Ghats, survey forests by night, and interview people. During this period, I also kept an eye and an ear out for any information on Malabar civet. My observations and camera-trap photographs, like those of other researchers, captured several civets, mongooses, and small cats, but the Malabar civet eluded us.

Although many wildlife researchers worked by day, few worked at night, studying nocturnal species. Among them was R Nandini, of the National Institute of Advanced Studies, Bangalore, who studied an equally interesting and difficult group of nocturnal animals—the flying squirrels. She had gained valuable experience in reliably identifying the creatures of the night, even when they were fleeting glimpses on spot-lighting surveys. During surveys for the rare small Travancore flying squirrel, she was also on the lookout for Malabar civet.

Finding a black and white civet with ringed tail flattened on a road near Kudremukh in Karnataka, she called me. We carefully looked for the characters that would define a Malabar civet, as the small Indian civet also occurs there. Besides size and the coat colour, we looked for a crest of black hair running along the back and over the tail ending in a broad black tail-tip, and a prominent necklace of black and white bands on the neck. Our initial excitement gave way to disappointment—it was a small Indian civet.

Nevertheless, it prompted us to dig deeper into the details of taxonomy and identification of the Malabar civet. We noticed several loose ends and the status of the Malabar civet was puzzling. Even after hundreds of night-time field hours along the Western Ghats, neither of us saw an animal matching this description. In the absence of observations of live animals, we were left with only scattered notes in the literature and about a dozen museum specimens labelled as Malabar civet to work with.

We explored the history and details of the specimens housed now in the Natural History Museum, London, the Zoological Survey of India, Bombay Natural History Society, Chennai Museum, and Calicut University. Simultaneously, the Kerala Forest Research Institute and the Wildlife Trust of India were conducting field surveys for Malabar civet.

One declared the species probably extinct, the other carried on with hope.

The Malabar civet is rare in museum collections too, and the exact place of origin is absent for all specimens barring the three recent ones from the late 1980s. None of the specimens indicate whether they were first-hand acquisitions or had traded hands before reaching the museum. Early naturalists who had contributed to the information on this species, were also collectors and traders in dead and live specimens, often involving middlemen, across south and south-east Asia. Further, the Malabar civet has also been considered a subspecies of the ecologically similar and genetically related large-spotted civet found in the low elevation forests of many South-east Asian countries. All these have added to the uncertainty over taxonomic identity of the species, leave alone details of its ecology.

Why only from a single locality?

How is that a few individuals of the species were found in the late 1980s from a single locality after nearly a century of absence? One possibility is that the Malabar civet is indeed very rare as previously thought, extirpated over much of its range due to habitat loss and hunting. However, it is not easy to drive a small carnivore with generalist habits to extinction.

Another intriguing possibility is that the civet is a species introduced for farmed extraction of civet, a musk-like substance secreted from their anal glands, known in trade and for use in Ayurveda since ancient times. Could this be why all known specimens come either from captivity or from a small region in Kerala close to a trading port and centre for Ayurvedic medicine? Could this be an introduced population of large-spotted civet, gone feral for a short period of time and thereby the source of the recent skins? Could this be a hybrid between the large Indian civet (found in northeast India and southeast Asia) and the African civet—both used extensively in civet farms elsewhere, even today?

Have we lost another species?

Or have we really lost another species of mammal from India? If not, what has become of the species? Until these issues are resolved, every bit of information about the species remains valuable. Sightings should be carefully matched to the species’ unique features and attempts made to confirm this with photographs. An easy-to-note field character would be a banded tail with a broad black tail-tip and a dark line on the top. Even a bad photograph of a wild Malabar civet would be better than none at all. After years of research, we are little closer to knowing more about the species than when we started.

Maybe a piece of the puzzle will fall in place with genetic analysis now underway in the National Centre for Biological Sciences, Bangalore. Right now, many pieces of the puzzle remain missing, and requires diligent search. As Albert Einstein said, “The search for truth is more precious than its possession.”


The author is a scientist with the Nature Conservation Foundation.