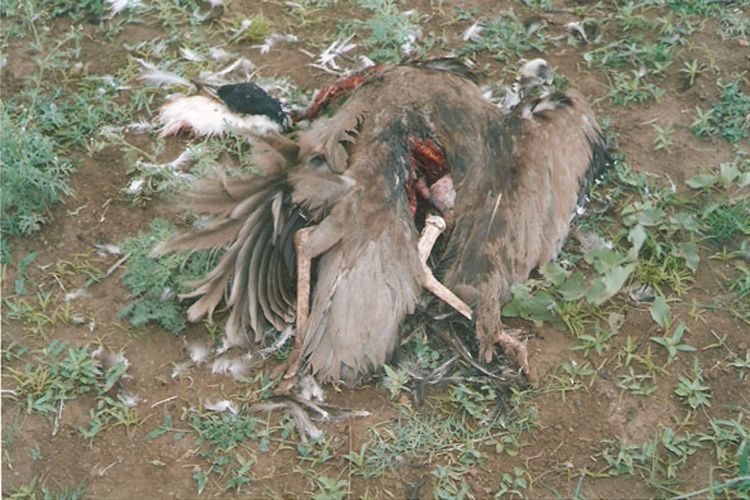 DK Chindage
This male Great Indian Bustard was found dead hanging from a power line in the Karmala area of the bustard sanctuary, Maharashtra.

Avian mortality due to collision with power lines is one of the leading causes of decline in the population of several species of birds, globally. This includes bustards and diurnal raptors. Thus an increase in the number of power lines in the bustard habitat at various Indian sites is a growing concern. These developments in the human landscape pose a challenge to the conservation of these bird species.

There were two reported incidents which led to the actual death of Great Indian Bustards (Ardeotis nigriceps) in Maharashtra on account of collisions with these power lines. On 7th August, 2002 a male GIB was found dead in the Karmala area of the Great Indian Bustard Sanctuary of Maharashtra. The dead bustard was found hanging from a power line. This power line crossed the grassland plot where bustards were regularly seen. Unfortunately, this was the only breeding alpha male in the area. Post this no bustard has been sighted in Karmala breeding areas within the sanctuary. The death of the alpha male seems to have led to the disappearance of the female bustards in these areas, which otherwise proved to be suitable breeding grounds prior to this incident. The second incident is of a bird found dead in the Indapur area of Maharashtra. Field observations in the area suggest possibilities of power line collisions. The data to prove that these accidents were caused due to collision with power lines is inadequate. The findings are solely based on my observations.

Ironically bustards are a terrestrial species and spend very little time in flight. The risk of a collision is high only if the bustard’s initial flight is caused by a sudden take off, close to a power line, due to which it then flies at a lower height, and can easily collide into the powerline. The reaction time is also affected by flight speed, which tends to be higher in species with relatively heavy bodies requiring more of a forward momentum to remain airborne and higher wing loading, which also reduces maneuverability. Large, heavy and relatively small-winged birds with poor vision are most susceptible to collision. The habitat structure is short and has open vegetation, typically favored by the GIB, a heavy bird. This structure encourages flying at lower altitudes, and is thus very susceptible to collisions with power lines.

With an increase in the density of power lines, the risk of bustard collision is on the rise. But not significant enough for a large scale population collapse. However, in some cases collisions have proved to be a major source of unnatural deaths of bustards. In Africa, data supporting avian mortality is available. Collision with power lines has led to the deaths of 200 Ludwig’s Bustards (Neotis ludwigii), reported thus far. India has had a fewer number of collision related GIB deaths reported, but due to the GIB’s extremely low population, and lack of observers, even the death of one or two birds due to collision will result in local extinction, as has been observed in Karmala, Maharashtra.

Various measures such as the use of thicker wire, installation of PVC spirals, bright strips, neoprene bands,yellow aviation balls, PVC vibration dampers have been implemented in high priority bustard and core areas frequented by birds, in order to reduce avian collisions with power lines. The effect of these measures to mitigate the collision risk involved is varied. Despite this we must have a systematic study of the impact of power lines on bustards and other large sized birds in general. We should also incorporate necessary policy measures in the planning of power lines in wildlife areas. The best measure is to divert power lines from the prime bustard areas, but in human dominated landscapes within India, this may not always be feasible. Installing various bird diverters will help prevent collisions of not only bustards but also various other species which are on the verge of extinction. We hope that the required policy level changes are implemented by the respective authorities before it is too late. 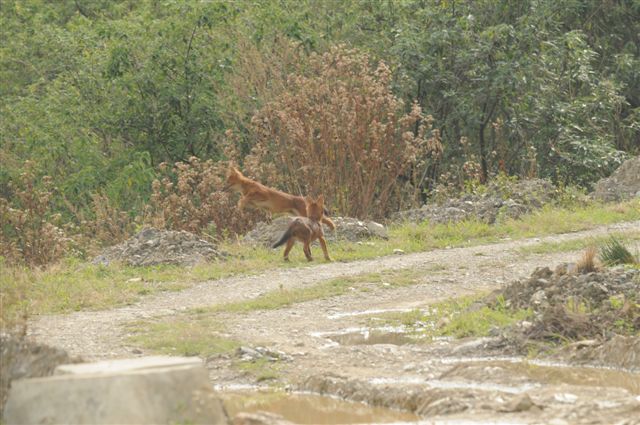