Photography a Serious Threat to the Great Indian Bustard 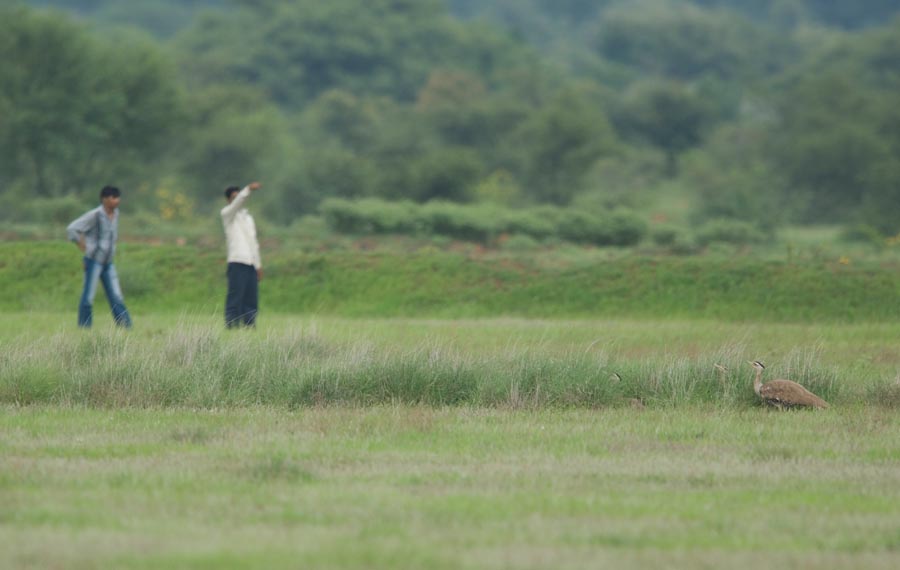 Dhritiman Mukherjee
The GIB is vanishing at an alarming rate and protection for all its breeding sites from human visitors is extremely important.

The GIB does not differentiate between a photographer and a poacher and treats them both as a serious threat. So, even approaching the bird for benign purposes such as wanting to take a picture can pose a serious threat to these birds, whose number has plummeted below 200 in India.

The GIB lives in open, short grass plains. It uses its height of 3.5 to 4 feet to scan for threats, and is able to perceive them from a long distance. Once it sees a potential threat it has a habit of facing the intruder and doing nothing until the perceived threat has fully passed. The time that is thus lost would otherwise have been invested in foraging for food. If an intrusion or disturbance continues for a long time, the bustard is unable to forage enough, threatening its very survival.

The breeding season imposes more time constraints for the bustard. Along with its usual activities such as feeding, preening, and dust bathing, the male GIB has to devote time to courtship, display and defending its territory. Therefore, any loss of time due to disturbance impacts these activities. Since mating does not occur without a formal display, disruption of courtship may even lead to failure of breeding.

The GIB moves over a vast landscape during the non-breeding season but congregates at traditional lek sites during the breeding season. These lek sites, which are few and far between, are well known and have become popular for tourism and photography. This increases the possibility of disrupted breeding, threatening the survival of the species.

The nesting season of the GIB is just about a month. It doesn’t build a nest as such and therefore there is no way to know whether a particular picture of a female GIB has been taken during the nesting season, unless it also shows the chick. The female GIB lays only one egg and it takes on the entire responsibility of rearing the chick for up to a year. Any disturbance during this period makes the chick vulnerable to natural enemies. It also reduces the feeding time available to both mother and chick. During an intrusion, there is always the probability of the mother and chick getting separated.

The GIB is vanishing at an alarming rate and protection for all its breeding sites from human visitors is extremely important. The species can revive only if there are enough undisturbed places to feed and breed. A mass movement for creating awareness on the need to stop human disturbance in prime GIB habitats is urgent. Individuals and organizations must come together to support such an endeavour. There is now a vital need to define ethical photography and publicize the ‘dos and don’ts’. All wildlife lovers must report disturbance to GIBs to the authorities. Wildlife magazines and photography websites should also take a firm stand on these issues. They may, in fact, be the biggest change-makers. One good example is of the Hesarghatta grasslands in Bangalore. Earlier, this fragile area was overrun with photographers and many images were posted it. However, thanks to awareness messages on Facebook and photography forums this has declined drastically.

As part of a species recovery programme for the Great Indian Bustard, the Ministry of Environment and Forests (MoEF) has reportedly banned photography of the bird during its breeding season from April to October in Gujarat. The reason cited is: “Unethical photography during the breeding season often acts as a constant source of disturbance to the bustards and disturbs their breeding patterns.” However, laws like the Wildlife (Protection) Act are only as good as their implementation. Self-regulation by photographers is the best and most lasting solution. Let’s leave the GIB alone!


Dr. Pramod Patil, works for the conservation of the Critically Endangered Great Indian Bustard with the Bombay Natural History Society and BirdLife International.