Maharashtra Forest Department/Girish Punjabi
A new study compares the efficacy of different field techniques to arrive at reliable estimates of dholes in the wild.

The fundamental metric that we need for assessing and monitoring the status of threatened or endangered species is the population size, i.e., we are typically interested in finding out how many individuals of a species currently exist. Unfortunately, estimating these numbers is a daunting task because most endangered animals– especially those that live in dense tropical forests– are rare, secretive and elusive. For animals that have individual markings (like the stripes of a tiger, spots of a cheetah, rosettes of a leopard, etc.), we can use camera trap surveys and apply certain statistical models to reliably estimate their numbers. But this approach cannot be readily used for animals that do not have uniquely identifiable body marks. The Asiatic wild dog (dhole) is one such ‘unmarked’ endangered species for which are yet to gain reliable population estimates. A recent collaborative study by scientists from the IUCN Dhole Specialist Group, Wildlife Conservation Trust, University of Copenhagen (Denmark), King Mongkut’s University of Technology Thonburi (Thailand), Wildlife Conservation Society–India and the National Centre for Biological Sciences explored the application of different statistical models to estimate dhole numbers based on camera-trap surveys.

The researchers first conducted a review of all previous studies that have attempted to get at either (1) dhole population numbers, or (2) amount of area occupied by dholes– in different locations across their distribution range. Of the 38 such studies, only three had generated somewhat reliable estimates of dhole population size– one in Pakke Tiger Reserve (India), a second in the Dong Phayayen-Khao Yai Forest Complex (Thailand), and the most recent one in Wayanad Wildlife Sanctuary (India). These findings underscored the need for exploring field and analytical methods to try and estimate dhole numbers from other parts of their range.

The researchers then used photo-encounter data on leopards and dholes collected from Radhanagari Wildlife Sanctuary (Maharashtra, India) in 2019. The intention was to test the application of three new statistical models (‘site-based abundance’ model (SBA), ‘time-to-event’ model (TTE), and the ‘space-to-event’ model (STE)) to estimate dhole populations in Radhanagari, and use the leopard as a control in some sense since the population size of leopards was already known from the more established and reliable ‘spatial capture-recapture’ models. The study found that the SBA and TTE models produced unreasonably high and ecological implausible estimates, whereas the STE model generated a realistic estimate of dhole numbers in the area.

According to the study, Radhanagari currently harbors around 33 dholes, at a density of ~9 individuals per 100 sq. km. This estimate is higher than previous estimates from Thailand (2–3 per 100 sq.km) and Pakke (6–7 per 100 sq.km), and lower than the estimate from Wayanad (12–14 per 100 sq.km). The study also documented three breeding packs (i.e., packs with pups) in Radhanagari. In dhole packs, it is only the dominant male and female that typically reproduce. Considered in context, the study area which extends across a 350 sq. km area supports 33 dholes and 6 breeding adults. These results point to Radhanagari’s high conservation value for dholes, both, in the Western Ghats landscape, and globally.

Dholes are apex carnivores that are ecologically important in the forest systems across south and southeast Asia. Because they are generally found at low densities, are relatively secretive, and also do not possess unique body markings, estimating their numbers using common techniques (such as photo-encounters from camera traps) has been a major impediment in the attempts to conserve their populations. While recent studies have tried different approaches to address this issue, researchers have called for greater collaboration between scientists studying dholes and other species across dhole range to facilitate greater sharing of camera-trap data, intellectual exchange and exploring novel methods to estimate their numbers. Doing so can help build a global database on dhole population status, and further enable population biologists to project population trends, model population viability and design conservation strategies for ensuring the long-term persistence of the species across its range.


Arjun Srivathsa works on the conservation ecology of large carnivores in India. He earned his PhD from the University of Florida (USA), and is currently an INSPIRE Campus Fellow at the National Centre for Biological Sciences, Bangalore.
Girish Punjabi is a Conservation Biologist at the Wildlife Conservation Trust and lead author of the study. Both are members of the IUCN Dhole Working Group. 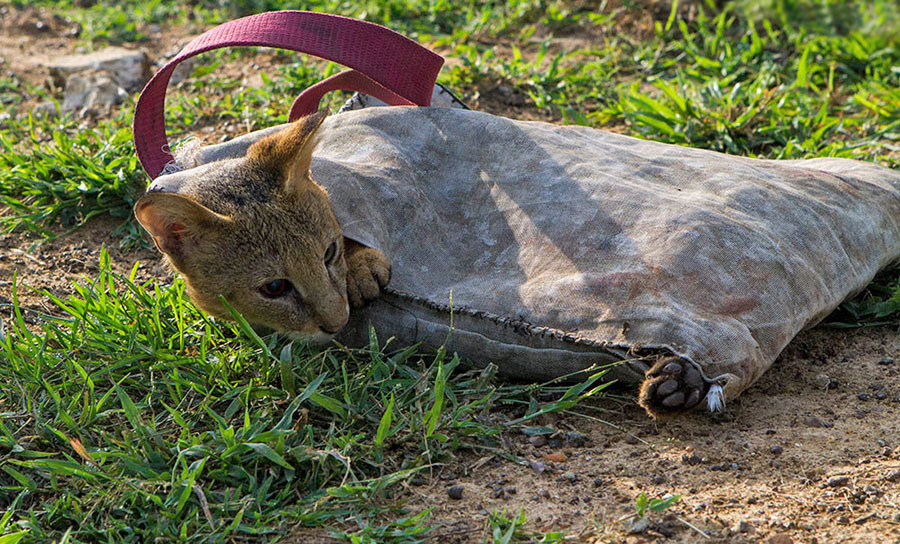 Jungle Cat in the Bag