Upmanyu Chakraborty/TSA
A radio-tagged Northern River Terrapin being released in the wild by STR officials and members of TSA.
Radio tracking terrapins 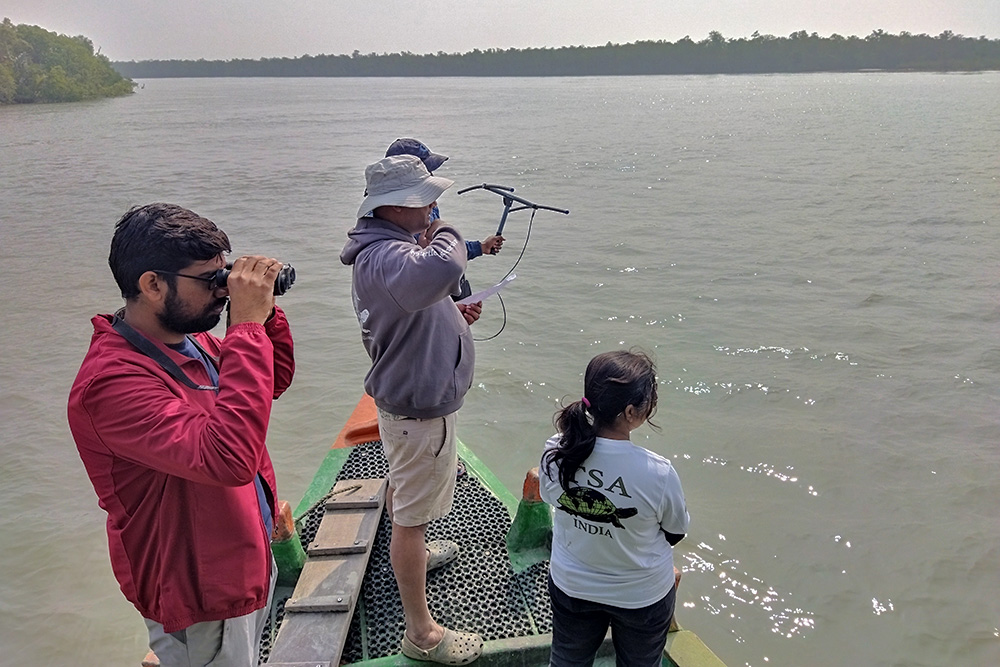 Upmanyu Chakraborty/TSA
TSA India staff will monitor their movement and survival via satellite transmitters affixed to the carapace of each turtle.

The Northern River Terrapin (Batagur baska) is a large-sized species of aquatic turtle with an average carapace length of 60cm. They are known to nest on beaches close to river mouths or on river islands. Once abundant in South Asia (India, Bangladesh, and Myanmar) till the 1900s, the Northern River Terrapin is now listed as Critically Endangered by the Red List of the International Union for Conservation of Nature (IUCN).  Wild terrapin populations precipitously declined due to the unsustainable collection of adults and eggs for food. With fewer wild adults, the species now teeters on the brink of extinction. Turtle Survival Alliance (TSA) and its partners estimate that fewer than 20 adult terrapins now survive in the wild across the Sundarbans of India and Bangladesh. It is widely regarded as one of the most endangered freshwater turtles in the world.

The first-ever rewilding of the critically endangered Northern River Terrapin in India was initiated as 10 captive-bred individuals (7 females and 3 males), fitted with satellite transmitters, were released in Sunderbans National Park in January 2022. This was part of a collaboration between officials of the Sunderbans Tiger Reserve (STR) and TSA, after a decade of conservation breeding at designated facilities within the STR. This pilot release will quantify their movement and survivorship, and guide a strategy for future reintroductions of the species in India. TSA’s partners Zoo Vienna and Bangladesh Forest Department had previously released 7 male Northern River Terrapins in the Sunderbans (Bangladesh), equipped with satellite transmitters in 2017-2018.

The released terrapins were approximately nine years old and represent a second attempt to return this critically endangered species to the wild in India. They are offspring of twelve “founder” animals discovered in 2008 in a pond at the Sajnekhali Interpretation Center within Sundarbans Tiger Reserve. Based on knowledge gained from previous Northern River Terrapin releases, we expect these ten terrapins to make considerable movements through this ecosystem.

Through a joint West Bengal Forest Department (STR)/ TSA program in 2012, these founder animals were part of a conservation breeding initiative, with the first successful reproduction of 33 hatchlings in 2012. More than 400 terrapins were hatched through this program and ten sub-adults were selected and released. In addition to carefully managing breeding in captivity, STR and TSA worked with central government agencies to obtain permits and engage with communities within the Sundarbans in educational initiatives on the importance of the terrapins’ return to the wild.

TSA India staff will monitor their movement and survival via satellite transmitters affixed to the carapace of each turtle with the help of a Very High Frequency (VHF) component. Specially licensed fishermen will report the location and condition of each turtle if captured incidentally. Integrating local fishermen and riverside communities is a fundamental component of TSA’s approach for at-risk species in India, while the use of satellite transmitters to obtain data on the turtles’ daily movements is the first-ever tracking study of a non-marine turtle in the country. Data acquired from this study will guide conservation and repatriation measures for future rewilding efforts.

Of released turtles, three ended in Bangladesh, where two of them were rescued by the Bangladesh Forest Department in March. Later after a short period in captivity, the turtles were released, with the help of Vienna Zoo, as part of a dialogue between the two countries. Till now all turtles have utilized an area of over 10,000 sq. km, which equates to the entire range of the Sunderbans in both countries.

The overriding challenge is re-establishing wild populations as intense and widespread fishing practices heavily influence this ecosystem. Thus, the success of this rehabilitation depends on the local riverine community’s support to embrace the return of this iconic turtle. The Sundarbans is an immense mosaic of tidal rivers and mangrove forests. The Northern River Terrapin conservation breeding program and the rewilding effort in the Sundarbans are part of a larger bi-national strategy by TSA and its partners to create large colonies within the turtle’s native range and, ultimately, restore their wild populations.


Shailendra Singh is a conservation biologist at the Turtle Survival Alliance (TSA). Jones Justin S. is the deputy field director of the Sunderbans Tiger Reserve.