N. Lakshminarayanan & K. Mohan Raj
Document Download
A sloth bear that was run over in 2011. 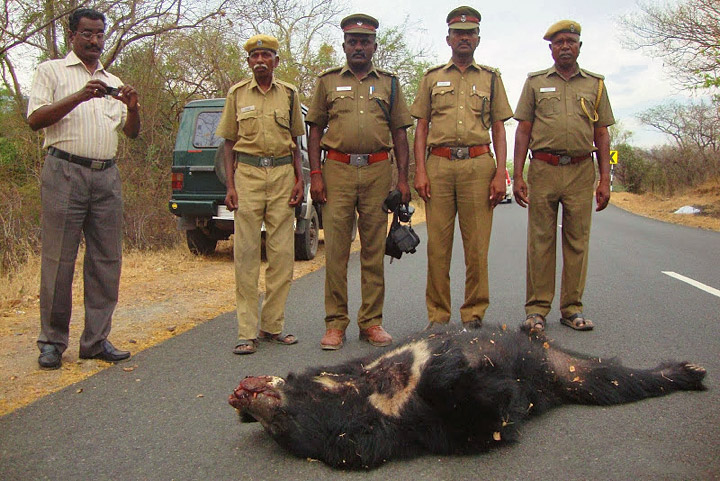 Roads: A major threat to biodiversity

A large body of empirical work across the world clearly demonstrates the perilous impacts of major roads on biodiversity (see Laurance et al., 2009 for review). Major roads passing through forests cause irreversible physical disturbances to the forest, and act as barriers to flora and fauna, curtailing free physical movement and even genetic flow. Roads also have other undesirable deleterious consequences to forest ecology such as weed proliferation, biotic pressure due to littering and others. One of the serious direct threats posed by roads to conservation is wildlife mortality as a result of collisions with speeding vehicles.

Numerous studies from India have demonstrated the ill effects of major roads on survival prospects of wildlife belonging to various taxonomical orders (Das et al., 2007; Seshadri et al., 2009, Baskaran and Boominathan, 2010). It is increasingly recognized that road kills even overwhelm the effects of poaching in driving many wildlife species to extinction. Incessant traffic through wildlife habitats can also adversely modify animal behavior as demonstrated in a study on elephants in Mudumalai National Park (Vidya & Thuppil, 2010).

Realizing the perilous impact of roads on conservation, there is renewed emphasis, especially in developed countries, on design and realignment of roads to reduce wildlife road kills. In recognition of the growing threats that roads and other linear intrusions pose to wildlife conservation in India, the National Board for Wildlife (NBWL), under the Ministry of Environment and Forests (MoEF) prepared a comprehensive background paper and guidelines regarding commissioning, maintaining and realigning linear intrusions such as the roads in wildlife areas (Raman et al., 2011; MoEF, 2011). Furthermore, the emphasis for securing wildlife from adverse impacts of roads was clearly articulated in the National Wildlife Action Plan – 2002-2016.

National Highway NH 209 bisecting Sathyamangalam Wildlife Sanctuary in Tamil Nadu is a ‘death trap’ for wildlife large and small. If urgent mitigation measures are not put in place, thousands of animals including endangered species will continue to die needlessly. This report, based on careful observation, suggests exact locations where speed control measures are absolutely essential.

Sathyamangalam Forest Division (SFD) is one of the most important sites in south India for landscape-level, long-term conservation of endangered mega fauna such as tigers and elephants. Besides large mammals, the mosaic of diverse vegetation types of SFD supports rich biodiversity and also serves as an important catchment area for numerous streams that foster major rivers such as the Bhavani and Moyar, which provide succor to the parched plains of Erode and Karur Districts. Considering the potential of SFD in biodiversity conservation, the state government notified a portion of the division, comprising the lower plains, as a wildlife sanctuary during 2008 (Anon, 2008). Subsequently, the extent of the sanctuary was increased.

Sathyamangalam Wildlife Sanctuary (SWLS) is wedged in the middle of an important tiger landscape in the country, bounded by Mudumalai, Bandipur and Biligirangan Hills Temple Tiger Reserves. Jhala et al., (2011) have suggested that SWLS holds a sizeable breeding tiger population. Therefore, to fortify tiger conservation efforts in the landscape, SWLS was notified as a Tiger Reserve during the year 2013 (Anon1, 2013). Sathyamangalam is also part of Elephant Reserve-7 (Rangarajan et al., 2010) that straddles both Eastern and Western Ghats and supports the largest population of Asian elephants in the world (Sukumar, 2003).

One of the major threats that seriously undermines conservation efforts in SWLS is the National Highway (NH 209) that runs through the heart of the sanctuary (and tiger reserve). This highway connects the cities of Mysore in Karnataka and Coimbatore in Tamil Nadu. Both Mysore and Coimbatore are experiencing massive urbanization and, as a consequence, the road traffic on this highway has increased manifold during the last few years.

National Highway 209 cuts through the core of Sathyamangalam Wildlife Sanctuary for about ~28kms, between Puthuvadvalli and Pununjur at the Tamil Nadu-Karnataka interstate boundary (Map-1). The altitude at which the road passes through the sanctuary ranges from 400m to 1100m.

Although systematic data on wildlife road-kills for Sathyamagalam do not exist, our empirical evidence from working in the landscape for the last five years clearly indicates that road-kills of wildlife in the reserve are high, and on the rise in the wake of increased traffic and speed of vehicles. During a one-day assessment in 2012, Sathyamangalam Environment and Wildlife Association (SEWA), a local conservation NGO, found 2800 vehicles passing through NH209. They observed that the traffic was uniformly heavy throughout the day (SEWA, 2012). It is rational to assume that the number of vehicles plying through this stretch will only increase with time.

A Free Meal — Conflict between Wolves and Feral Dogs