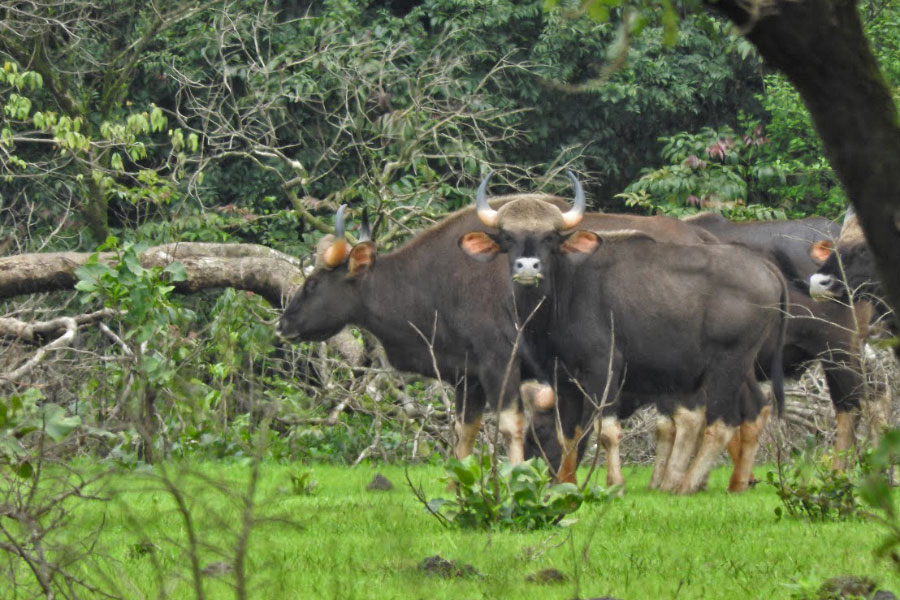 Girish Punjabi
Goa forgot that the animal it announced as pest was its state animal.

Ecological and social impacts apart, detractors have questioned the economic viability of the airport.

We are at the Barazan plateau on the northern tip of Goa, more famous as the site of Mopa, the state’s contentious upcoming airport, peering with delight at lumpy mounds of defecation not unlike the gobar of the venerated cow. Yes, delight, because that particular turd belongs to the largest bovine in the world, the gaur, or the Indian bison as it is also called.

A herd of gaur had trampled the verdant grassland just preceding our arrival.

The gaur is listed as a Schedule I species—in other words, it is equally protected as the tiger –under the Wildlife (Protection) Act, 1972. Ordinarily, its presence would be a deterrent to diverting such wildlife-rich habitats for the airport, and other such development projects. But there are ways around such hiccups. Here, in a separate move, the state sought to declare the gaur a ‘nuisance animal,’ for the damage it causes to farmer’s crops, even though it had yet to assess and quantify the actual loss.

Goa forgot that the animal it announced as pest was its state animal.

Also in our line of vision was a peacock, jauntily swaying its vibrant plumes, as the monsoon clouds rolled over the green, green plateau. This was another creature announced as vermin by Goa, though it had to retract when reminded that the peacock was the national bird. It’s trending currently, the recasting of endangered animals as vermin by states across the country purportedly to help farmers–though science shows such stand-alone measures have failed to halt crop damage. There is another likely agenda: to ensure rare animals are not hindrances to develop wildlife rich landscapes as airports and other mega projects.

It bears thinking what the state would do about Vithal Kambli, a farmer himself, who is as much of this land as the gaur, and the peacock. It is he, and the other villagers gathered, who draw the analogy. Vithal’s land has been acquired, after declaring it public purpose for acquisition’ under Section 6 of Land Acquisition Act 1894 (it was before the new Land Acquisition Act, 2013). Vithal had no say in the matter: he indicated his protest by refusing to sign the notification, nor has he accepted any compensation: nothing, he says, can compensate what the land gives: paddy, millet, pulses, turmeric, sweet peas, okra, pepper, potatoes, jackfruit, cashew, papaya, tamarind …and much more. It has fed and sheltered his family, educated his children. The airport is to be built on a whopping 82 lakh square metres, besides which land will also be acquired for the 6-lane approach road from NH 17 to the top of the plateau. Vithal is part of Mopa Vimantall Piditt Xetkari Samiti (association of farmers aggrieved by the Mopa airport) spearheaded by Sandip Kambli who have moved the Supreme Court against the land acquisition. With the state poised to start construction after the expected arrival of Prime Minister Narendra Modi in September to lay the foundation stone, he and other aggrieved farmers have a question for the PM: “Are we hurdles as well?”

The question may not penetrate the security that surrounds the Prime Minister’s visit, but the PM may be interested to know that the issue is far beyond a motley group of farmers rallying against the 3,000 crore Mopa project. And that it threatens to snowball into a major issue in the upcoming 2017 assembly election.

Both former Chief Minister and current Union defense Minister Manohar Parriker, and current CM Lakshmikant Parsekar are strong votaries of the airport, stating that Goa needs another airport. The Navy-controlled Dabolim is ill-equipped to handle the escalating tourist numbers; and is handicapped by operating within a defence regime. Mopa is located in Parnem taluka in North Goa—also Parsekar’s constituency, bordering Maharashtra.

Unlike the north, South Goa has not traditionally been a BJP stronghold, but this blurred in 2012 assembly elections when there was a strong anti-Congress wave. Mopa has again accentuated the north-south divide, with apprehensions that the centre of economic gravity would concentrate in the north, and even toward Maharashtra, thus leaving southern Goa backward. It has also sharpened the environment vs conservation debate that is rocking the coastal paradise, which has been ravaged by illegal mining and massive real estate development. Mopa is being promoted as an engine of growth with commercial and other ancillary development, and to cater to a higher volume of tourists. However, civil society groups claim that Goa’s sagging infrastructure and fragile ecology can ill-afford yet more tourists, and say it is an environmental disaster.

The Mopa site-Barazan plateau is of ecological and cultural significance. During my whirlwind visit, besides the gaur poo, I caught a glimpse of a barking deer, saw a chestnut giant squirrel leap from tree to tree, and the great Indian hornbill take wing. The hornbill was one among the 50 odd species of birds we met. A more systematic scientific survey of the plateau yielded direct sightings and presence of leopard, gaur, otters, giant squirrel, sambar and the critically endangered pangolin—whose conservation is of global concern today. There are possibly two species of otters here, one of which, the small–clawed, is the tiniest otter in the world, and is listed as vulnerable by the World Conservation Red List.

Barazan also has the occasional tiger. Signs of breeding tigresses have been recorded in the adjoining forests of Tillari-Chandgad, recognised as an important habitat and Eco Sensitive Area by the Bombay High Court. This region is part of the larger Radhanagari-Sawantwadi-Dodamarg–Mhadei-Bhimgad-Kali tiger landscape, encompassing forest areas in the three states, including Karnataka. In fact, the Maharashtra government is considering declaring the evergreen forests and grassy plateaus of Tillari a wildlife sanctuary. But the Tillari forests are too small, and to sustain it the health of abutting forests is crucial. A development of the scale of the airport will splinter the landscape, dooming the tiger and other wide ranging large mammals.

The Environment Impact Assessment Report, on which the environmental clearance of the project is based, fails to record the tiger, or any wildlife for that matter. The EIA categorically states that there are “no major wild animals in the study area,” and corroborates its claim by listing Domestic Dog, Domestic Cat, Domestic Cattle, Common House Mouse! The EIA ignores the many endemic species of plants in the region, fails to mention the critically endangered, endemic Dipcadi concanense, a wispy white flower found only on such laterite plateaus of the Konkan. It ineptly lists sandy dune vegetation which is typical of beaches.

The EIA ignores an ancient Buddhist era cave, baldly stating that there are no sites of cultural importance. It also fails to mention the sacred groves that are protected zealously by the local people. I went to one, Barazan-from which the plateau gets its name; and was administered a stern telling to for sauntering in with my shoes. The grove is a living temple, venerated for generations-now counting its days as it stands on the runaway of the proposed airport.

Such shoddy anomalies aside, the biggest flaw in this report is that it fails to consider the fact that the airport and its ancillary development will be fatal to the water security of Goa.

The rocky plateaus of the region, locally called sadas, are also referred to the region’s water reservoirs. The porous laterite rocks and the grass soak up the monsoon water, which seeps in to the ground, and is also released slowly into springs. No less than 44 perennial streams flow from Barazan, feeding the people and fields downstream. A study by groundwater expert Himanshu Kulkarni reports that it recharges about two billion litres of water every year. The massive construction involved will choke the streams-the runaway itself will be built on three– causing havoc to the state’s hydrological system.

The Environment Clearance has been challenged in the National Green Tribunal, seeking a stay on the project and revoking of the shoddy, misleading EIA. The next hearing is slotted for 23rd August.

The ecological and social impacts apart, detractors have questioned the economic viability of the airport. Why else would the government lure bidders with an additional 15 lakh sq metres of land for commercial development? Another airport, Chipi is coming up just 80 kms away from Mopa adding to profitability uncertainty. But does the region have capacity to feed three airports?

Most serious of all are the safety concerns raised by the then Executive Director AAI, R C Khurana who also chaired the Site Selection Committee for Mopa. He categorically stated “that Mopa is unsafe and inadequate as a location in Goa’s future interest from an aviation point of view.” In an interview to the Goan in Februaty 2013, he explained that three sides of the plateau had sharp drops which is not safe for landing aircrafts — even if the runway was adequate. He also found the site restrictive for future expansion.

What then fuels the development of Mopa?

It has long been alleged that Mopa is more about real estate development, with political and business interests making a killing on cheaply bought land investments.

A quick google-search reveals that the real estate market in the region is hot, with a number of exclusive gated communities and vacation homes on the anvil. But tourists and second homers escaping to Goa for their share of paradise, may find that it is already lost.