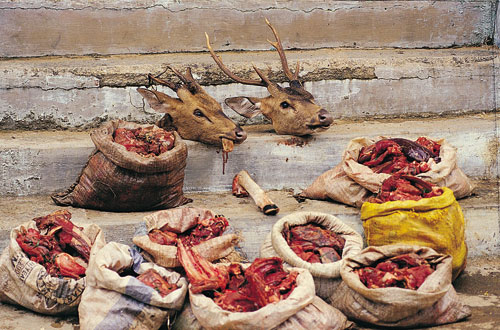 Sanjay Gubbi
Hunting by local communities is among the most widespread threats to Indian wildlife, yet, the understanding of its nature, extent, and impacts on wildlife has been poor.

Hunting wildlife for the pot and for commercial sale is far more widespread than most people realize, and is leading to an ‘empty forest’ syndrome in many parts of the country.  M.D. Madhusudan and K. Ullas Karanth conducted a fascinating study on local hunting around two wildlife reserves in Karnataka. These are the results of their study, excerpted from their original scientific paper published in Ambio in 2002.

There are two distinct types of hunting in India:

The surveys were conducted during 1996–97 in and around two National Parks in Karnataka: Kudremukh and Nagarahole

Kudremukh study areas: Kudremukh National Park is surrounded by at least 88 villages (population > 2,80,000 in the 1990s), with another 98 small hamlets (population unknown) located within the Park. In addition, the Malleshwara mining township (population c. 4,000) is also located within the Park. In Kudremukh, the study focused on getting information on the intensity of hunting, and describing patterns of hunting like prey-choice and hunting techniques used. Since all hunting in India is forbidden under law, the study was probing an illicit activity, and one that people were not comfortable discussing. Hence, the authors carried out a pilot survey in the region before launching the actual study. Based on this survey, they chose three widely separated villages bordering the forests, which they believed would be easier to gather and verify information on hunting. The population of these villages, taken together was c. 9000.

Nagarahole study areas: The Park stretches across the districts of Kodagu and Mysore, and is dominated by moist and dry deciduous forests, and supports a rich assemblage of large herbivores and their predators. Based on decades of experience in the Park area, the authors identified two moist forest patches for the study – Arkeri and Nalkeri – each about 70 sq km in area, but differing with respect to pressures of hunting. Hunting pressure was consistently higher in Arkeri owing to the fact that, until 1995, it lacked wildlife protection staff with the exclusive responsibility of controlling hunting. Arkeri also offered better access to local meat markets, maintaining the higher levels of hunting there.

Methodology In Kudremukh, the interviewees were given two sets of questions:

The study concentrated on the diurnal complement of the larger mammals hunted in the region. It did not estimate abundances of other large mammals, which were mostly nocturnal, and hence, was unable to assess hunting impacts on them. However, the impact of hunting on these species, most of which are vulnerable tree-cavity and burrow dwellers, may indeed be quite serious.

Managing Hunting in India: Sustainable Use or Preservation?

The management of natural resources worldwide has largely been driven by two divergent and influential approaches: sustainable use and preservationism. The sustainable-use approach is founded on the basic premise that extraction of a resource can be so regulated that it does not compromise either the integrity of the resource, or its ability to renew itself. In contrast, the preservationist approach argues that, under prevailing contexts of rising economic aspirations of users, and spiralling demands from commercial markets for resources, restrained extraction is an unattainable practical goal. Therefore, it advocates a complete cessation on extractive use as the only practical, clearcut, enforceable option to ensure the continued survival of a resource. In the past (1955–74), wildlife managers in India attempted to regulate hunting, and failed. If regulated hunting has not been achieved under authoritarian initiatives, neither are there examples of successful self-imposed, community-based regulation of large mammal harvest which demonstrate their sustainability with reliable data. In the absence of data, the authors believe that mere reinforcement of native conservation traditions is a naive management strategy, fraught with grave risks to large mammals. The rare Indian examples of traditional wildlife preservationism (e.g. the Bishnois of Rajasthan who protect antelopes), are completely overwhelmed by numerous examples of rampant native wildlife consumerism (tradition-driven hunting for meat, hides, horns, and other wildlife products). In conclusion, although a variety of approaches promise the continued survival of India’s large mammals, the data in this study, stripped of its ideological content, highlights one simple irrefutable fact; large mammals thrive under scrupulous protection, but continue to wilt under intense pressures of local hunting. Thus, while we look for socially acceptable, economically equitable, and morally agreeable ways of minimizing hunting pressures on large mammals, there is no escape from investing substantially in their explicit protection. First published as ‘Local hunting and the conservation of large mammals in India’ by M.D. Madhusudan and K. Ullas Karanth in Ambio, Vol. 31 No. 1, February 2002. For a more detailed understanding of the study we suggest you read the original paper.  Download the PDF here.