India to Establish a National Database of Camera-trapped Tigers

This piece originally appeared in the journal Oryx: Volume 47- April 2013.

Following the adoption of reﬁned protocols for intensive annual monitoring of source populations of tiger (see Oryx, 46(4), 480), India’s National Tiger Conservation Authority (NTCA) is now following through by establishing a country-wide database of wild tigers captured in cameratrap surveys conducted by multiple research and governmental institutions at increasing intensity across the country. The objective of this project is to assign Unique Tiger Identiﬁcation (UTID) numbers to a large sample of tigers.

A major objective of the project is avoiding multiple counting of individual tigers in multiple areas, a problem that dogged the now defunct pug-mark tiger census method, which was ﬁnally abandoned in 2006 in favour of cameratrapping. Another key objective is to ensure that the rigorous protocols for assigning unique IDs are followed and that the origin of each camera-trapped tiger image is authenticated by responsible oﬃcials or scientists. This avoids the ‘contamination’ of the database through deliberate or accidental introduction of spurious tiger images of dubious origin. A third objective is to ensure that photocapture dates and locations are entered accurately, to facilitate rigorous analyses of the data using spatially explicit capture–recapture models, as required by the new survey and estimation protocols already mandated by NTCA.

The initiative to establish the UTID database was taken by Dr Rajesh Gopal, Director of Project Tiger, in October 2011 after a series of consultations with leading tiger researchers in India, including Dr Ullas Karanth of the Wildlife Conservation Society (WCS) and and Dr Y.V. Jhala of the Wildlife Institute of India (WII). A range of data collection and camera-trap sampling protocols, based on experience from the large-scale monitoring projects for tigers across India by WCS and WII, have been incorporated into the processes involved in generating ﬁeld data. The pattern matching software Extract Compare, which speeds up individual identiﬁcations from stripe patterns on tigers (http://www.conservationresearch.co.uk), developed by Lex Hiby of Conservation Research, UK, with assistance from WCS scientists, will provide a robust and ﬂexible platform.

The database will be oﬃcially titled the National Repository of Camera Trap Photographs of Tigers (NRCTPT). It is anticipated that >1,400 individual tigers camera trapped by WCS and WII surveys conducted after 1 January 2006 will form the initial core of the database. Subsequently, it is anticipated that the database will expand through active participation of other researchers conducting camera trap surveys and with authenticated tiger images obtained from other sources such as police seizures of skins, poached tigers, conﬂict related removals, and tourist or other incidental photographs of tigers. Currently, the WCS database of tiger IDs in Karnataka has over 4,000 images of 600 individual tigers from multiple sources, used for rapid sharing of information with State Forest Department and NTCA in real time, as tiger conservation issues arise. Begun in1986 by Dr Karanth and now covering an area of 4,000 sq km of prime tiger habitat in Karnataka, this WCS project pioneered development of camera-trap surveys of tigers in 1991. In the long term the NRCTPT project is expected to facilitate not just the accurate monitoring of key surviving source populations of India’s national animal but also to help eﬀective conservation decision making in case of human– tiger conﬂict incidents and to address the burgeoning problem of poaching of tigers across the country. 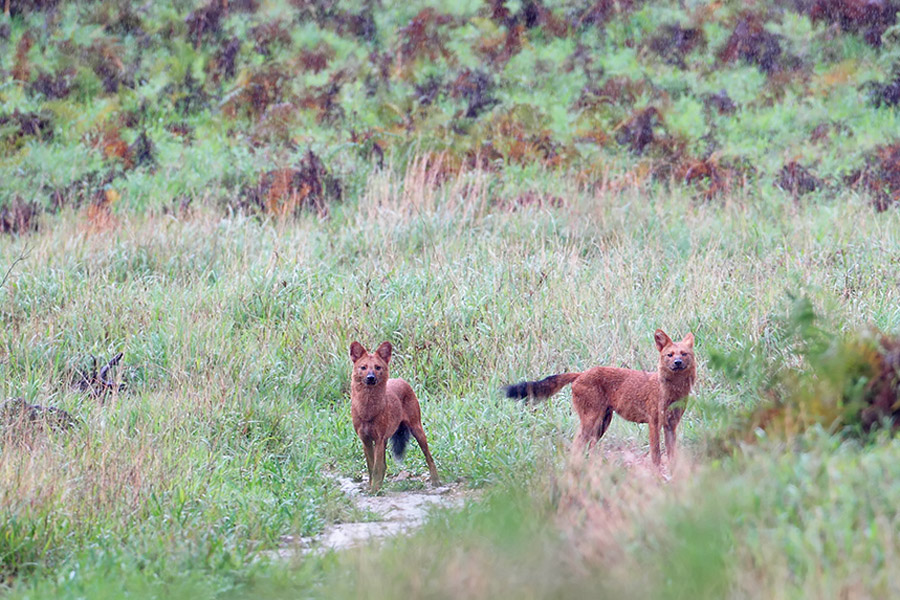