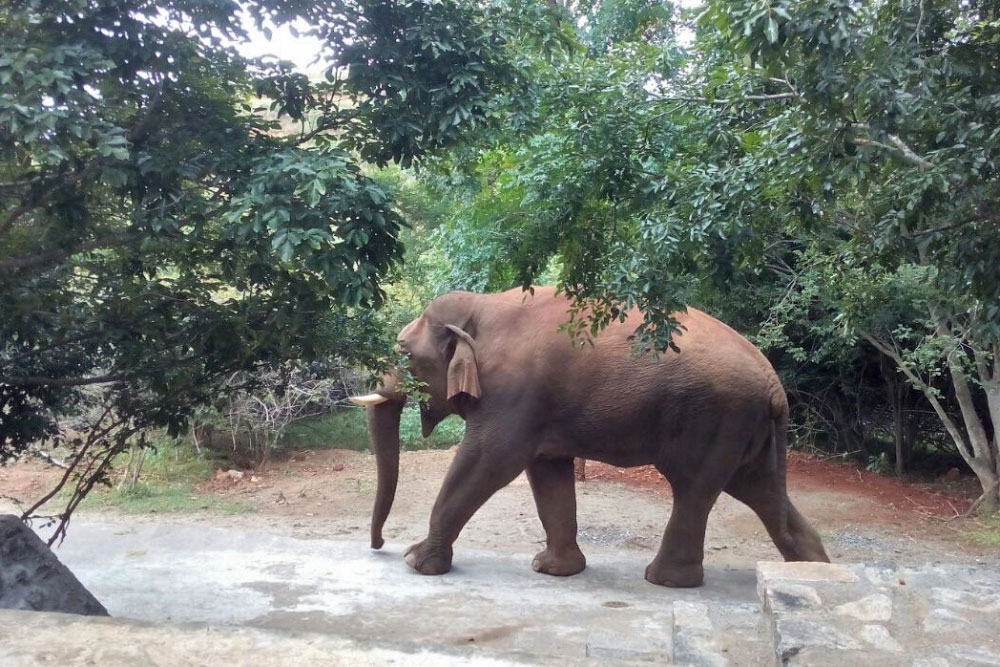 Priyanka Das
The 25-year old tusker from the Anaikatti region in Coimbatore, was relocated to Anamalai Tiger Reserve.

Chinna Thambi, a 25-year old tusker from the Anaikatti region in Coimbatore, Tamil Nadu, was relocated to Anamalai Tiger Reserve on 26th January, 2018. This was done following repeated complaints by a section of farmers from the region that the elephant was raiding crops and breaking into houses for food. These agricultural lands are adjacent to Thadagam Reserve Forest and Anaikatti South Reserve Forest of Coimbatore Forest Division. Perhaps because this particular bull had never attacked anyone, the indigenous community had great affection for the gentle giant, whose nick name Chinna Thambi means Little Brother in Tamil. Their affection for the animal can be gauged from the fact that many agitated against his capture and offered special prayers for his well being at the ancestral temple dedicated to elephants at the Panapalli tribal settlement. According to newspaper reports, the gentle tusker has never caused any human casualty. Sadly, his tusks were damaged and he suffered injuries on his back in the process of relocation. A few days after completion of the relocation operation, “Chinna Thambi Gaja Yatra”, he moved out of the Anaimalai Tiger Reserve and went to a village called Angalakuruchi near Pollachi. Perhaps this might have been his attempt to return ‘home’. Although he was moving through villages, he did not cause any harm to human life.

Soon after this, a petition was filed by activist Arun Prasanna against re-capturing Chinna Thambi to be trained as a Kumki elephant. The Madras High Court accepted the petition and directed the Tamil Nadu Forest Department to file a counter affidavit by 11th February. At that time, Chinna Thambi was within the property of Amaravathi Cooperative Sugar Mills in Madathukulam, and attempts were being made to push him back into the forest. On 11th February, the Tamil Nadu Forest Department declared that he would be captured and kept in an elephant camp on the basis of a report submitted by elephant expert, Ajay Desai. The court accepted this recommendation, and an order was passed in accordance with it. Within days of the order, the elephant was re-captured and, at present, he is being kept inside a wooden enclosure at Varagaliyar Elephant Camp (inside Anaimalai Tiger Reserve).

Chinna Thambi is an elephant I have lived alongside. Eight months have passed since I first encountered him. It was the second day of my Masters’ course in the Salim Ali Centre for Ornithology and Natural History (SACON) – 10th July, 2018. We had just finished dinner and there he was, making his first appearance, walking on the campus main road with the utmost calmness. Three days later, while going for a study trip, we found him standing on the Anaikatti main road, and feeding under the bright afternoon sun. There were vehicles patiently waiting on both sides of the road, until a speeding truck went very close and disturbed him. He started moving toward the vehicles for some time. Some vehicles moved backward whereas the others went ahead. People started getting down from their cars and bikes to take photos and selfies. It is important to note here that the elephant moved through standing vehicles like any of us would through a traffic jam, turning a blind eye to the noise and chaos, until he found an opening to get into the forest. In another instance, he was seen feeding on bamboo beside the administrative building at around 4 pm. Despite all the spectators, he stopped only after finishing all the edible parts of the clump, and walked straight towards a water hole without glancing at anybody. These are just some instances that show how well-adapted he was to the human dominated landscape. He always acted so normally in human presence that it did not take me much time to accept his presence.

A friend suggested the name Buddha for him to echo his composed nature and that is what we started calling him. It was only later that I learnt that he is referred to as Chinna Thambi by the locals. Everyone in the place told us of their ways of coexisting with him. We were advised not keep any fruits in our room but in a separate building, and to always go around in groups and be alert. He gradually became omnipresent in my life because even in his absence I would be wary of him. It was a beautiful amalgamation of two contrasting emotions: fear and fascination.

Once, when he was in musth, he was seen feeding from the trees behind the Research Scholar’s Hostel. Then he suddenly came towards one of the open windows but retreated as soon as an inmate lit a piece of paper on fire. On another day, when he broke the window of the same room at midnight, he was chased away in a similar way. I am not oblivious to the crop loss or property damage faced by the poor villagers due to him. There would hardly be days when we would not hear firecrackers set off by villagers to chase him away.

Indeed, the losses faced required to be addressed and adequate measures had to be taken immediately. But was relocating Chinna Thambi the solution? Yes, he did cause economic loss to the poorest of the poor in our society, but was it not true that Chinna Thambi otherwise lived in harmony with people without posing any threat to life? Is it not unrealistic on our part to expect that this area won’t be occupied by any other elephant in future now that he’s been taken away? What if that new elephant doesn’t know how to live among humans and causes greater damage? Nishant Srinivasaiah, an elephant biologist from National Institute of Advanced Studies, Bangalore, explored a similar issue in his TED talk. He says that experienced bull elephants that are adapted to human dominated landscapes teach younger bulls how to live alongside humans. He goes on to show that when these experienced males are taken away, the un-mentored younger bulls get into conflict with people. A 2012 study by Prithviraj Fernando et al on assessment of elephant translocation in Sri Lanka has lessons to teach, and calls for better management strategies. They found that among the 16 translocated elephants that were monitored with GPS collars, 2 were killed within the parks where they were released, while all the others left those parks to move towards their erstwhile home ranges. It goes on to say that the urge to return could be because of the fact that familiarity with one’s environment has a positive correlation with individual filtness. Moreover, translocation was found to intensify human-elephant conflict.

In my opinion, the Forest Department should have first tried to deter him from raiding crops by various methods developed by experts, including electric fencing, elephant-proof trenches, alternate cropping patterns, building watch towers etc. They should also have taken an initiative to develop an early warning system, and strengthen their compensation scheme. When it is a competition over resource, protecting the resource is much easier than removing one elephant after another and getting new elephants to occupy the vacated habitats. Last but not least, we must remember that Anaikatti is an ancient elephant corridor and habitat. The ‘Anai’ in the name means elephant in Tamil. Dramatic land use change has a huge role to play in why we see elephants more frequently in our neighbourhood. A greater part of our effort must be focussed on preserving this area from any further degradation so that the remnant natural vegetation for elephants remains intact. This should include strict action against the growing number of brick kilns, and the mushrooming of resorts.

Conservation India’s Opinion on this topic

While Chinna Thambi’s fate is indeed a sad one, animal lovers and conservationists need to ask themselves these questions: who among us would really be willing to tolerate a perpetually hungry, 4-ton behemoth in our midst? Especially, one that is capable of eating or destroying an entire season’s crop in a day or two, as well as breaking down houses to satisfy its gargantuan appetite? While it is easy to insist that all other methods ought to have been tried for mitigating the issue, what practical choices did the local Forest Officer really have? Where will the officer suddenly find the budget for several kilometres worth of electric fencing or elephant-proof trenches? Even if the money had been found, such measures cannot be put in place overnight. Besides, addicted as this elephant was to feeding on crops, for how long would these measures have really stopped him? At best, he would have moved further afield, to raid crops in other, unprotected fields, where he may have encountered humans who did not know how to deal with his presence.

Clearly, the local population’s tolerance was already stretched to the limit, fondness for the elephant notwithstanding, and it was just a matter of time before they took the law into their own hands. Yes, the officials should have known that dumping the elephant into a nearby reserve would not solve anything, and that it would, at best, only transfer the problem to another area. And yes, they ought to have exercised the utmost care in ensuring that the elephant did not get injured during the capture operations. These things aside, we at CI feel that removing the elephant and taking him into permanent captivity was the right decision, given the limited options. If another bull does move into the space vacated by Chinna Thambi, both locals and forest officials should act early on, and vigorously deter its visits. The real foolishness is in being indulgent with a wild elephant for months, letting it get thoroughly accustomed to humans, and then lament that it is eating you out of house and home!

In the meantime, issues of habitat connectivity, removal of encroachments and establishment of corridors need to be addressed, and a proactive plan for conflict management and mitigation must be drawn up for the area. NGOs and wildlife biologists with proven expertise in these matters must find ways to collaborate with the Forest Department to ensure that incidents like this are minimised in the future. 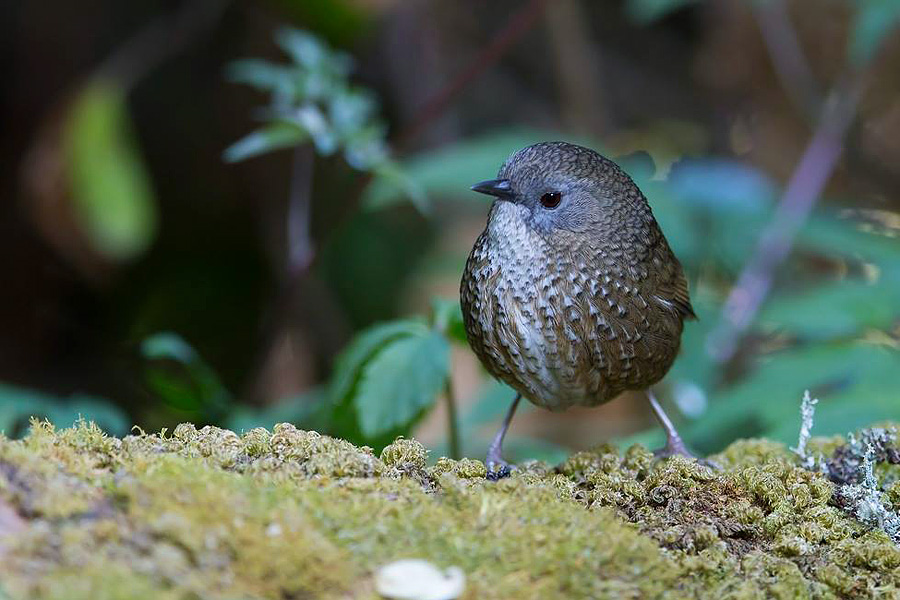