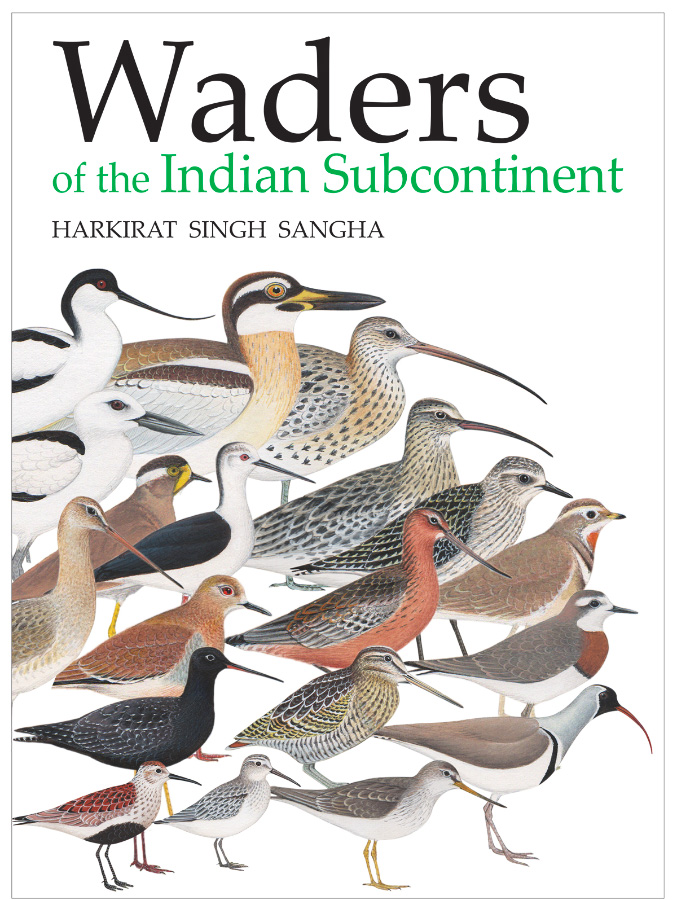 Author
Despite the enormous diversity of waders in India, there is no field guide exclusively devoted to waders and their field identification.

WADERS OF THE INDIAN SUBCONTINENT
By Harkirat Singh Sangha
Published in association with World Wide Fund for Nature
Hardback, 520 pages

This book review originally appeared in the February 2022 issue of Sanctuary Asia magazine.

The pandemic has been a terrible time for all of us, with many major books, including some of my own being either cancelled or postponed.

Therefore, when the courier arrived one bleak morning, my joy knew no bounds, for it contained a huge tome on Indian waders written by my friend Harkirat Singh Sangha, the quiet and extremely busy Rajasthani bureaucrat. I knew that he was working on one such project, but more than 20 years had passed and I had lost track of its progress. He has travelled the length and breadth of this vast country in his unending quest to create a lifetime’s work. At first glance, the book instantly recalled Rishad Naoroji’s Birds of Prey of the Indian Subcontinent, first published by Helm and later, rather badly, by OM Books. This book made a huge impact on Indian ornithology, but was later largely forgotten and I sincerely hope that Harkirat’s book will have a longer and better run.

In the past, many books have been written on waders. This is because they were often shot for food with Godwits, with several varieties of snipes including woodcock leading the preference.

Among books written were Game, Shore and Water Birds of India by Col. A. Le Messurier, The Edible Game Birds of British India by James A. Murray and Indian Sporting Birds by Frank Finn, which were primarily for hunters for identification. Harkirat’s much more academic book has been written with much more honourable intent and covers all the species found in the subcontinent. India’s vast eastern and western coasts, deltas, rivers and lakes offer unlimited scope for wader watching.

This extremely comprehensive study covers all the waders found in India, including some obscure ones such as the Long-billed Plover, Far Eastern Curlew, Caspian Plover and the Eurasian Dotterel. It is lavishly photographed (over 450 images) with as many plumages by a plethora of photographers (who are individually credited), which in itself is a huge and improbable task. These photographs are further complemented by 540 original illustrations by the highly talented contemporary Rajasthani artist Damodar Singh Gurjar, who works in watercolour, oil, gouache and tempera. Primarily known for his botanical subjects, his work was shown in 2001 in a solo exhibition, Enduring Perfection: Paintings by Damodar Lal Gurjar, at the Hunt Institute for Botanical Documentation Carnegie, Mellon University, and his work is included in A Passion for Plants: Contemporary Botanical Masterworks, a collection by Dr. Shirley Sherwood, in 2001. While this is his first major work on birds, I sincerely hope that it is only the beginning of his documentation of Indian birds.

Harkirat’s vast knowledge is reflected in the way he has assiduously detailed each species, describing interalia, its taxonomy, range, distribution, field characteristics, vocalisation and habitat. He has also covered the different plumages from juvenile to breeding. The images that accompany each include: breeding and non-breeding birds, the juvenile and flight views of breeding and non-breeding birds. Often, particular and defining features of the species are highlighted in details such as head-patterning and beak types.

Importantly, confusable species have also been listed, which is a great asset for both amateurs as well as professionals.

The status and conservation status of each species is categorised as Least Concern, Nearly Threatened, Vulnerable, Endangered, Critically Endangered and Data Deficient.

Worthy of mention are the detailed and legible, colour-coded maps based on verified information that accompany each species and show details of whether it is a resident, migratory, summer or winter visitor. Passage migrants and occasional records are also depicted. A map of bird topography is also given for ready reference.

The introduction makes for fascinating reading, covering diverse subjects such as earlier studies on waders, migration, habitats and threats to waders. As a hands-on field person, Harkirat’s insights into habitat losses, decline in wader populations, the effects of damming and mining of riverbeds, pollution, disturbances and global warming are note-worthy.

Scrumptiously produced with an attractive cover and printed on glossy paper, this is a handsome volume that makes it an invaluable asset for all bird lovers. Unfortunately, this book is not available at bookstores and traditional outlets, but is available online.

A couple of other interesting reviews of the book – by Maitreya Sukumar, one of India’s leading birdwatchers, and by Ananda Banerjee, an author and naturalist.

Short-nosed Fruit Bat and its Tents