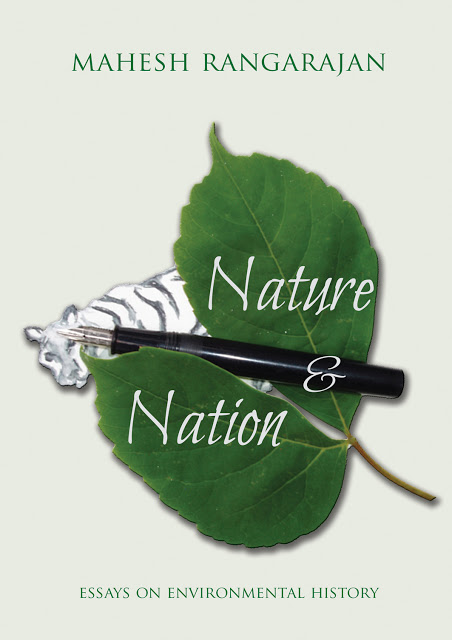 Thanks to Conservation India’s content sharing agreement with Livemint, we are able to bring some interesting conservation articles authored by Ananda Banerjee.

Eminent scholar and historian, Mahesh Rangarajan’s new book ‘Nature And Nation’ transcends academia to reach out to readers with an interest in natural history. When books on nature are few and far between, this book is a good read for people who get inspired by nature and are curious about its history. Especially, when the human species is at crossroads with growing disconnect with the environment. The book is apt for a time when the term ‘ecosystem’ is increasingly aligned to the digital world rather than ‘nature.’

In the West, Professor Peter Kahn at the University of Washington is studying this pervasive trend. Kahn is of the opinion that humans are losing touch with nature. As two global trends are reshaping human existence – the degradation or destruction of large parts of the natural world, and unprecedented technological development, that is taking control over our lives even before we realize. The changes never really dawned on us because of its time scale. “So slowly, oh, so slowly, have the great changes been brought about!” wrote the famous American naturalist John Burroughs, in his book Time and Change (1912).

Rangarajan takes us on a journey from Colonial India to the present, reflecting on the various events on how our natural world shaped up – the challenges it faced and the political interventions that preserved large tracts of nature. His essays penned between 1998 and 2012 reflect on the famous Native American proverb: “We do not inherit the land from our ancestors, we borrow it from our children.” ‘Nature and Nation’ gives us an opportunity to reflect on our recent past, on how issues – cultural, political and economic, shaped and nurtured our present day surroundings. It’s a book about human interaction with the natural world, on ecology and history, focusing on animals, society and politics. There are nine essays spread over three sections – Nature Past, Present and Future – evoking the celebrated lines of T S Eliot’s Burnt Norton – “Time present and time past,
Are both perhaps present in time future”

The canvas of environmental history is vast and multidisciplinary. Given the multifarious character of India it is not an easy task to address. Rangarajan introduces the subject in a lengthy introductory essay, which is best left to the academia to reflect upon. The other nine essays travel through the realm of time and space – from the hunting days of Colonial India, a period that saw the shift of the lion from the royal to conservation icon, to the notion and practice of Ahimsa, the involvement and interventions of political stalwarts like Jawaharlal Nehru, the first prime minister of independent India and his daughter Indira Gandhi, who succeeded her father. Today much of the rewards of wildlife conservation measures are attributed to the interventions of Gandhi. During her tenure as Prime Minister key decisions such as the initiation of Project Tiger, India’s flagship wildlife conservation programme, the enactment of Wildlife Protection Act and saving the Silent Valley in Kerala, a biodiversity hotspot, from submersion by a hydro-electric project were undertaken.

“The strategy of preservation was simple. Spaces on land and water of intrinsic ecological worth were delineated and protection was made the explicit management priority. Preservation was the way to safeguard ecological integrity…Protecting nature has primarily meant locking human influences out in a small but significant area of land…Tiger reserves, national parks and wildlife sanctuaries still slow down if not hamper major changes in the land in parts of India.”

While “making space for nature in India today is no easy task,” such conservation measures did help India, which has little land area and enormous anthropogenic pressure, to remain a repository of biodiversity.

India today is a mega-biodiverse nation with three biodiversity hotspots in only 2.4 percent of the world surface with 17 per cent of the world population. The country has twice the number of people today compared to four decades ago when the Wildlife Protection Act and Project Tiger came into force.

Other highlights in the book are an essay on Africa, looking at its conservation dilemmas and on five prominent nature writers in India. Conservation stalwarts such as Jim Corbett, Kenneth Anderson, Salim Ali, Kailash Sankhala and M Krishnan – all of those who influenced a generation of naturalists and conservationists.

Environmental concerns, activism and conflicts are not new in history. ‘Nature and Nation’ is Rangarajan’s continuing “enquiry to locate present day concerns in a long term perspective.” The author remains rooted with his fascination on extinction and collapse as well as on the resilience of ecosystems.

‘Nature and Nation’ is also about our inheritance, why our environment is like it is and how we continue to influence its current state.